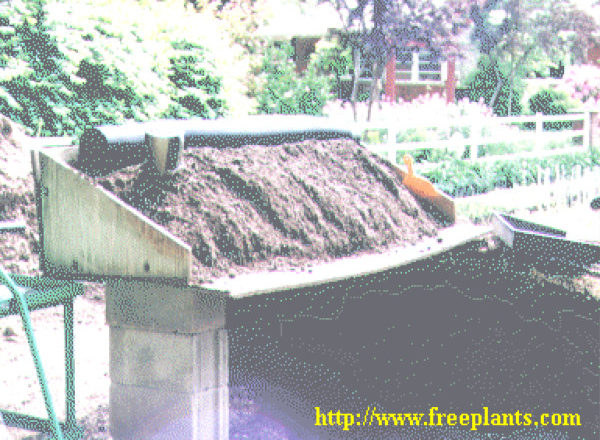 The potting bench that you are about to read about is not fancy, but very functional. It is also very easy to build and use. Except it doesn’t have any legs! Don’t panic, having a legless potting bench is actually a benefit, I’ll get to that a little later.

The potting bench described in this article is actually identical to the potting bench that we have been using for years in our backyard nursery, and it has served us well, potting up tens of thousands of plants. I like it because it is large enough to pot up around ten small plants at a time, and it holds a significant amount of soil.

However, since I originally wrote this article, I designed and built a potting bench for home gardeners that you may like better. There are lots of photos and step by step plans for building it on this page: http://www.freeplants.com/free-potting-bench-plans.htm

On the above page you will also find a photo of one of my other potting bench designs, an outhouse with a flip out potting bench! It’s unique, that’s for sure.

O.K., back to my legless potting bench.

Here’s a short list of what you’ll need to build Mike’s rugged, but functional potting bench.

Tools: A screwdriver, a small box wrench or crescent wrench, or if you have a 1/4″ drive socket set that’s even better. A tape measure, a small square, a drill, and a power saw.

Materials: One full sheet (4′ by 8′) of 3/4″ treated plywood. Make sure it is treated so it will last a long time. Untreated plywood does not hold up well at all outdoors.

15 doohickeys (you know, those little metal angle brackets, or corner brackets used to connect two boards together at a right angle. These metal brackets are bent in a 90 degree angle and have two holes drilled in them.

30 bolts with nuts 1-¼” long, and the correct size to fit the angle brackets you buy.

60 flat washers that fit the bolts

This is the potting bench you are going to build.
“Mike’s Legless Potting Bench”

Before you start, draw this out on paper so you know exactly what each piece of wood is supposed to look like before make any cuts. This way you won’t make a mistake that will ruin your piece of plywood.

Lay the plywood on a flat surface, like your garage floor. From one end measure in 16″ and draw a line across the sheet of plywood. With your saw, cut along this line. The piece that you are cutting off is 16″ by 48″.

Now draw a diagonal line across the smaller piece of plywood. (The one you just removed from the sheet.) Cut along this line. You should now have two triangular pieces that measure 48″ on one side and 16″ on one side.

The two smaller boards you have left should be identical. These are the sides for your potting bench.

These two pieces will serve as the bottom and the back of your potting bench. Take the back piece and stand it on edge, on top of the piece that will serve as the bottom of the bench to get an idea of how your potting bench is going to fit together. Make five marks where you will mount the angle brackets that will hold these two pieces together. Just space the five brackets along the two boards, making sure not to put any too close to the end so they don’t interfere when you install the two end pieces. Just keep the brackets about 1-½” from each end.

Note: Once you have the brackets installed and the bolts all tight you might want to cut off the ends of the bolts and file them smooth if they are sticking out so far as to be a hazard when you are handling the potting bench.

What I do is rest one end of the bench right on the pile of potting soil, and then support the other end with a saw horse, concrete blocks, or milk crates. By placing one end right on the soil pile, it is very easy to shovel the soil onto the bench. Not having legs also makes the bench easier to store and move around.

When I want to use it as a table for making cuttings, I just put a saw horse under each end.

There you have it. Mike’s famous legless potting bench. It ain’t pretty, but it’s very functional.