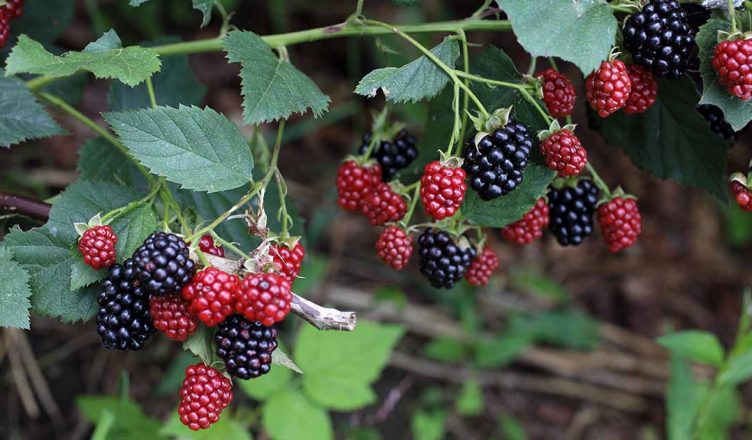 Blackberries are a sweet tasty treat that can easily be grown in a home garden. The perennial plants will provide plenty of fresh fruit for your table year after year with little care, but there are a few things you should know to successfully grow blackberries.

The types of blackberries are trailing, erect and semi-erect. There are also thornless blackberry plants available, and these come in all three types. Where and how you want to grow blackberries will determine which type of blackberry canes to plant.

Erect blackberry types are the most cold hardy and are recommended for the coldest climates. During their first year of growth, some of the canes will tend to trail a bit, but in their second year and later they will become more erect. The plants do not necessarily need to be trellised but you can grow these blackberries using a trellis for more support and to make harvesting easier if you wish.

Semi-erect and trailing blackberry plants should be trained to a trellis after their first growing season. Without a trellis, these plants tend to sprawl on the ground, making it difficult to harvest the berries and leaving them susceptible to slug and insect damage. Trellising also helps to grow blackberries that are disease-free as it increases air circulation around the plants and reduces losses from fungal diseases.

Thornless blackberry plants tend to be more sensitive to cold than varieties with thorns and may not be the best choice for growers in the far north. Most thornless varieties are hardy only to Zone 5, but a few varieties will survive in areas as cold as Zone 3.

For their first two seasons as they grow, thornless blackberries tend to grow like a vine along the ground, but they will begin to produce sturdier canes in later years. Trellising thornless blackberry plants will make harvesting much easier. We’ll discuss trellising in more detail a bit later.

Blackberry plants are perennials that will live for many years. To grow blackberries that will provide fresh, healthful fruit for years to come, carefully choose a permanent spot for your plants. Blackberries that are planted in full sun will produce the best, but the plants will tolerate partial shade, especially during the hottest hours of the day.

Blackberry plants prefer well-draining soil and will not survive for long in soggy soil. If heavy clay soil is a problem, creating a raised bed to grow blackberries is a simple solution. You can learn how to build a raised planting bed here: http://freeplants.com/preparing-raised-planting-beds.htm

The best time to plant blackberries is in the spring, as soon as the soil can be worked. Begin by digging a hole for each plant, being careful to not overcrowd the roots within the hole. Set the plant within the hole and cover the roots with soil, burying it to the same depth it was grown previously.

Gently tamp down the soil to remove any air pockets in the planting hole, then give the plants a good drink of water. If the canes haven’t already been cut back at the nursery, trim the canes down to six inches at planting time.

The plants should not be allowed to grow blackberries during their first growing season, as this will weaken the young plants. Their first year, the plants should concentrate all of their energy on establishing a good root system.

Although the roots of blackberry plants are perennial, the canes themselves are biennial, meaning that each cane, or woody stem, lives for two years. The first year, the new canes are referred to as primocanes. Primocanes do not produce fruit until their second year, when they are known as floricanes.

It is the floricanes that produce blossoms and fruit. After the floricanes have produced their crop of luscious berries, they die back. A healthy blackberry plant will produce new primocanes each year in the spring to replace the old floricanes.

It is much easier to grow and harvest blackberries if the canes are properly pruned and trellised. As soon as the entire crop has been harvested, the floricanes that produced the crop can be should be removed. Use a sharp pruning shears to cut the spent floricanes down close to the ground. Primocanes should not be cut back at this time, although those that are broken or are too spindly can also be removed along with the spent floricanes.

Floricanes should be removed from the plants after harvesting for all types of blackberry plants. Once they have produced fruit, the floricanes die back, and if left on the plant they just get in the way. The primocanes also need to be pruned to grow the best blackberries, and this process differs for erect and trailing blackberry varieties.

The primocanes of erect blackberry varieties are pruned in the summer when those new canes reach a height of about three feet. At this point, an inch or two of the tips of the canes can be pruned off. This will encourage the canes to become more sturdy and to grow more side branches, called laterals.

Sturdier canes with more branches will produce more fruit the following year. Over winter, while the plants are dormant, prune those laterals back to about 12 to 14 inches. This winter pruning of laterals will make harvesting so much easier, and the plants will tend to grow larger blackberries. While you’re out in the garden over winter pruning the laterals, remove any dead canes and those that have broken.

Trellising makes harvesting much easier and it keeps the fruit clean by keeping the canes and berries off the ground. A simple trellis for blackberries consists of two or more wires stretched between posts.

You may think you’re going to grow blackberries for yourself and your family, but the neighborhood birds think they’re also invited to the party. Birds are very fond of blackberries and they’ll help themselves to the biggest, juiciest berries.

To avoid sharing the crop with every bird that flies through, loosely cover your blackberry plants with birdnetting. Lay the netting loosely over the plants so you can easily remove it to pick the ripe berries. Birdnetting can be purchased at garden centers or from gardening catalogs.

It is very easy to grow blackberries, and it is just as easy to propagate the plants to grow even more blackberries. Root cuttings and tip layering are simple methods for making new blackberry plants. Go here to learn how to layer blackberries and other plants: http://freeplants.com/layering.htm

To propagate blackberries with root cuttings, cut some roots in the fall, taking roots about the size of a pencil or larger in lengths of three to six inches. Store the root cuttings in damp peat moss at about 32 degrees Fahrenheit until they can be planted out in early Spring.

Many blackberry varieties also send out runners from the roots, and new plants will pop up nearby from these runners. When these little plants pop up alongside the rows, carefully dig them up and transplant them into the row. Blackberry plants are pretty tough, and these little plants grown from runners can be transplanted throughout the growing season.

To grow abundant blackberries, the plants may need a shot of fertilizer. If using aged manure to fertilize a blackberry planting, it should be applied in late fall or early winter. Do not fertilize until the plants are dormant or nearly dormant. Fertilizing too early will encourage the plants to continue to put on new growth too late in the season and this new growth would be more susceptible to winter damage.

If not using aged manure, a 10-20-20 fertilizer can be applied in early spring when the plants are just beginning to show new growth. Apply five to six pounds of fertilizer per 100 feet of row.

With just a little pruning, a bit of fertilizer and an inch of water per week during the growing season, your blackberry plants will reward you with delicious berries for many years to come.

10 Seeds You Need for the Survival Garden

Is It Time To Revive “Survival Gardens?”