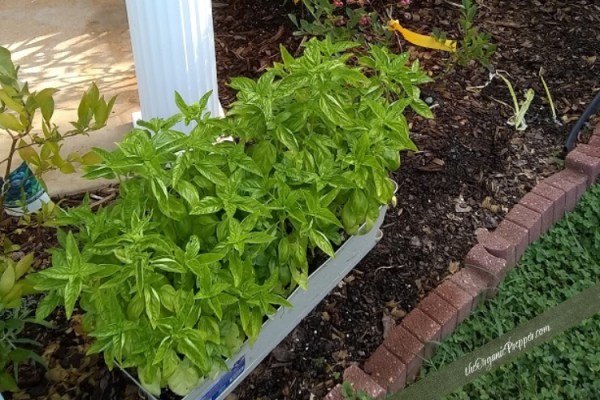 Are you itching to grow something for the table in these times of bare shelves, but don’t have space? Well, you’re definitely not alone. Gardening is suddenly very popular, both for the calories and the many other benefits.

Are you renting and your landlord isn’t interested in plowing up the lawn? Or, maybe you’ve only got a small yard that has to double as pandemic playground for the kids. Perhaps the covenants in your neighborhood restrict the area you can put into beds. Or you’re limited to just a balcony. Whatever restrictions you’re dealing with, I assure you that something yummy can be grown!

Let me show you how. Or rather, let my mom show you.

My parents retired from the frigid North to the baking South only recently, and though they own their house, they are prudently moving quite cautiously in altering the outside space. My father Randy is still figuring out what their ultimate needs and abilities are going to be. It would be a real shame to go to the effort of putting in beds and improving soil, only to have to scrape it away because the best garden spot is also the only workable garage site.

But my mother Rose is indomitable. Salad must be eaten, and so it will be grown, whether or not there is a space in the ground for it this year.

First, she made full use of her existing ornamental beds around the east, south, and west of the house. There was crepe myrtle, iris, azalea, and daylily already in those beds. She filled in the gaps with high bush blueberry as well as tomatoes, beautiful red okra, herbs, lettuce, onions, peppers, and even a pumpkin.

It may not look like a regular flower bed, but neither does it obviously resemble a food-production system. All but the most restrictive neighborhoods would probably allow some sort of mixed assemblage, especially if the flowers are showy enough.

Growing food in ornamental beds has some distinct advantages. There’s usually good access from existing paths, so you can pack your plants in pretty tightly and get more yield out of the smaller area. Mulch that is typically applied to ornamentals is also a great amendment for annuals, helping conserve water and keep the roots cooler in our hot summer temperatures, and ultimately building high-quality soil. Pollinators attracted by the flowers help ensure the fruits get pollinated.

Mixing up annuals with perennials and plants from different families takes a little more creativity than just planting in rows, but it really helps with pest control. Bugs that would thrive and multiply on a whole row of nightshades get confused when there are blueberries between the tomato plants. If you’re interested, there’s a whole body of information on this subject called companion planting.

Ornamental areas aren’t just good for fruits and veggies. Medicinals like Echinacea (purple coneflower) can do really well tucked into spare corners. I keep killing my Echinacea starts out in the main garden, but at Rose’s house they are thriving with a little shade.

After her beds were full, Rose turned to containers.

For root crops, she hunted down some plastic barrels from a local salvage establishment. These are polyethylene, which is very inert and usually considered pretty safe to grow food in. She drilled holes in them for drainage, filled them with purchased soil and covered them with a reflective material to keep the merciless sun from baking the roots.

Yield can be really good for such a small space, especially if you plant the potatoes low in the container and then periodically add soil in layers. As more soil is added, new tubers form off the stem, meaning you get far more potatoes from a single plant. When it’s time to harvest you simply tip the barrel over on a tarp. This is a lot easier than digging for little kids or people with limited mobility. Sweet potatoes need a longer season, but they also yield edible greens. At my house we eat them in Thai curry.

Rose also planted a garden in a cart. First, it gave her spring shelling peas and arugula. When those crops reached the end of their productive lives, she cleared them out and replanted spinach, peas, and beans. This is called succession planting, and it’s an excellent technique for maximizing yields from a small area.

Around here this is normally the wrong time of year to be trying for spinach and peas, because it is just too hot. With the cart, she can make sure they get plenty of light, then wheel them right out of the murderous North Carolina sun. She’ll also get yields from that cart long after all the beds are done for the year because she can wheel it into the garage on frosty nights.

Since we’re talking containers, let’s talk about bringing in soil.

Whether you get it from the local hardware store, greenhouse, mulch yard, or some guy off Craigslist, be aware that all soil is not perfect for veggies. They need nitrogen, phosphorous, potassium, and trace nutrients, or they will fail to grow or succumb to pests. Bagged soil labeled for containers is usually pretty well nutrient-balanced, but not always!

One summer I was renting, juggling a baby and a toddler, and trying to prepare to build a house. I knew I didn’t have time or money for a garden, but I just had to have fresh cherry tomatoes. I bought two little starts, one red and one yellow, and plunked them into bagged soil dumped in a pair of cardboard boxes. I was too cheap even for pots.

Instead of growing big and healthy the plants just kept looking really sad (and I was pretty sure it wasn’t from despair because they were planted in cardboard). Their lower leaves yellowed and then fell off, and I started looking up things like tomato wilt, trying to diagnose the problem. Actually, it turned out that the bagged soil was too low in nitrogen, which is a mobile nutrient that moves from older leaves to newer ones when needed. With a little fertilizer, my sad tomatoes started producing tons of fruit.

To know if your soil is already good or if it needs to be amended, you can get a DIY pH and NPK (nitrogen, phosphorous, potassium) test kit from your greenhouse or hardware store. They’re inexpensive, and it’s a fun little experiment. I usually have the kids do it. If you’re in the US, you also have access to a local Cooperative Extension soil testing facility. That test will be more precise and also cover at least some of the important micronutrients like calcium, and it’s usually free. Once you know your nutrient status, you can choose between the many available commercial plant foods, or make your own fertilizer for free.

Rose’s garden may not look traditional, but it’s very productive.

She’s able to keep it watered amply, and it isn’t so big and unwieldy that it turns into an unmanageable jungle, like mine is right now. It won’t provide all the veg she wants on her table, but it will give her a steady harvest of fresh things, letting her extend the time between shopping trips and insulating her from price spikes.

“I eat something from it every day, I wake up knowing I need to water and kill Japanese beetles and pick the ornamental okra. Gives me purpose.”  !~ Rose