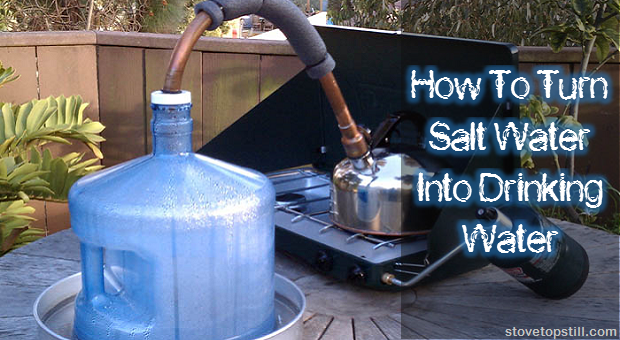 One of the biggest issues for many people if SHTF is going to be finding and maintaining a consistent, safe water supply. Though our planet is covered in water, only one half of 1 percent is drinkable! For example, people who live in coastal regions are surrounded by water but it does them no good because one of the quickest ways to die of dehydration is to drink salt water.

There are ways to make that water potable, though, and science is finding even more ways. In order to turn salt water into drinking water, you need to desalinate it first. That just means that you need to remove the salt. There are many methods for doing this but the most efficient and realistic way to do it at home in a survival situation is by using the distillation by evaporation method.

One of the easiest ways to convert salt water to drinking water is by using heat. You simply heat the water until it turns to steam, then capture the steam.

The water will evaporate but the salt and other impurities won’t. The problem here is that it requires a ridiculous amount of energy in the form of heat to get the job done. Still, it’s effective and if you combine the process with others, such as cooking or heating, you won’t be wasting nearly so much fuel.

This is a simple method but won’t net much fresh water at a time. If you’re on the run or just need enough for a couple of people, it will work, though. You’ll need a metal cup heavy enough not to float or heat-resistant glass, a pot with a domed lid and heat.

As a side note, you can do this with a pressure cooker too, and it will require less heat. Just be sure that you don’t boil it dry and crack the cup or the pot.

Hint: You can perform this method for turning salt water into drinking water using solar heat, too. It will take several hours so be sure that you have plenty of time and sunlight. Just put the pan out in the morning so that it has all day to evaporate. You could even substitute plastic wrap for the lid and just put a small rock or something in the center over the glass to form a drip point. If you use a round, see-through glass bottle or jug, the process will be much quicker because the glass will act as a prism, heating the water faster.

This method for turning salt water into drinking water allows you to distill a bit more water though you’ll still be using quite a bit of energy. It operates on basically the same theory as an alcohol still. You’ll also need a heat-resistant glass or metal bottle, a cork or rubber seal for the bottle, a few of feet of tubing and a catch-basin.

Just a hint: If you have a teapot, you could attach the tubing to the spout. Same theory!

This method is sort of a morphing of the two processes we’ve already discussed and may come in handy if you’re on the run and don’t have access to anything other than your camp pan. We always include aluminum foil in the list of things to keep in your bug-out bag and this is yet another use for it. You’ll need tubing too, so toss a few feet of it into your bag as well.

If you have the cash, you can invest in a solar-powered desalination unit that turns salt water into drinking water so you’ll be ready when SHTF. For that matter, with a little bit of ingenuity, you can build your own. It’s just basically a larger version of the bowl-and-plastic desalination method that we just described.

You can also use reverse osmosis to desalinate water but it’s not exactly something that you can build. You can buy personal RO devices for your home and even for water bottles but building your own in a SHTF situation isn’t realistic for most people. It requires special membranes and pressurization.

There is a technology being researched right now called electrodialysis. It’s not really new but progress has been slow on it. It involves using an electrical charge to remove the salt ions from the water and though it’s a great idea, they’ve only been able to reach about 25% desalinization. 99% is required for water to be considered potable. We’ll keep you posted on it though.

Along with desalinating water, all of the methods that we’ve described today also distill the water, effectively removing bacteria, viruses and other impurities from the water. If you’re using any of the solar methods, be sure to filter the water before you try to desalinate it because the process works best when the water is clear. Murky water will still work but it will take much longer.

If you have any other great ideas about how to turn salt water into drinking water, we’d love to hear about them in the comments section below!

How To Test Your Water For Pollution Agents