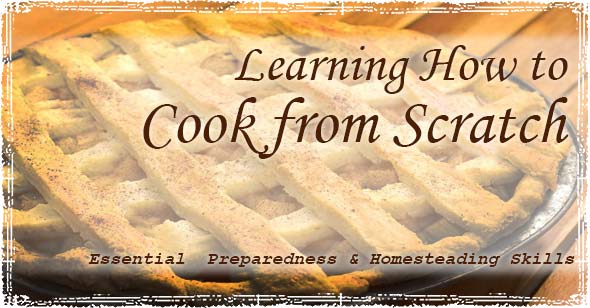 It’s quite shocking how many people are completely unable to cook something from scratch. These days the average American home eats a majority of its meals using prepackaged, highly processed foods that require very little skill to cook. If it doesn’t come out of a box, a can, or a plastic pouch most people are clueless when it comes to cooking. There are a number of reasons to learn how to cook homemade meals from scratch:

You have control over what’s in your food. Have you looked at the list of ingredients on the foods you eat? Do your even know what half of those ingredients are that you’re putting into your body? Cooking from scratch allows you to know exactly what’s on your dinner plate.
It’s healthier than eating processed foods, and it’s so much cheaper. Learning to cook with basic ingredients is not only better for your body, but it can significantly cut down on your monthly food bill.
It’s easier to manage things like food allergies and medical issues. If you or someone in your family has food allergies or medical issues, learning how to cook from scratch is essential to their health and wellbeing.
It’s a skill you’re going to need during a long-term crisis or collapse scenario. During a long-term survival situation, where essential services and food delivery systems are shutdown or cutoff, you need to be able to feed yourself using the food supplies that you have in your home.

The Basics of cooking from scratch.

The great thing about scratch cooking is many of the ingredients used to cook a wide variety of meals are pretty basic, and most of these items can be bought in large quantities – something that’s extremely important when trying to build a stockpile of long-lasting emergency food.

To really learn how to do this right you’re going to have to get your hands dirty and experiment; you’re also going to need a good cookbook. While there are a million cookbooks on the market these days, I recommend looking for something that was developed before the 1950’s; something that deals in basic ingredients, without relying on a bunch of pre-processed products.

One of the best books available is the Fanny Farmer Cookbook by Fannie Merritt Farmer. The book was first published in 1896 as The Boston Cooking-School Cook Book, and is now in its 13th edition (re-released by Marion Cunningham). While the 13th edition does have many of the original recipes, it has been updated in some areas. If you can find an original, snatch it up immediately; otherwise the later editions are a good place to start.

If you’re short on funds, I’ve uploaded a great set of recipes from World War I that will give you a good idea of what you can do with some very basic ingredients. The War Time Cooking Recipes can be seen here. It’s a good look into how people cooked during a time when rationing caused them to make due with whatever they had on their shelves. Once you start experimenting you can tweak these recipes with your own ingredients.
Tips for when you’re learning how to cook from scratch.

While there are a lot of really good recipes out there, many of them are untested or experimental recipes. When you’re first starting out, you want to avoid these types of recipes in favor of tried and true recipes that you can count on. Once you start learning the basics, you can then start to experiment. Besides the Fannie Farmer Cookbook that I mentioned above, two other great resources are the classic Better Homes and Gardens Cookbook or any of The Pioneer Woman’s Cookbooks.

One of the joys of cooking is experimentation, but when you’re just getting started you want to follow the recipes and make sure you measure everything. After you’ve been cooking for a while you’ll start to get a good idea of what ingredients do what, and where you can make changes. The next thing you know you’ll be eyeballing everything and making changes to recipes on the fly.

The freezer is your friend, and really cuts down on how much time it takes to prepare a fresh homemade meal. Once you have some good field tested recipes, ones that you know your family likes, you can then start doubling or tripling the recipe and storing the extra portions in the freezer. This makes it easy to give up those so-called easy preprocessed meals, in favor of healthier homemade meals that are just as quick and easy to heat up.

Despite all the warnings, the only real way to get started is to just jump in there and have some fun. There are going to be some setbacks, some total bombed meals, and even some meals that are so bad no one will want to eat them; but in the end, you are going to be more prepared, save a lot of money, be much healthier, and have a skill that’s going to last a lifetime.

The Lost Art of Scratch Cooking