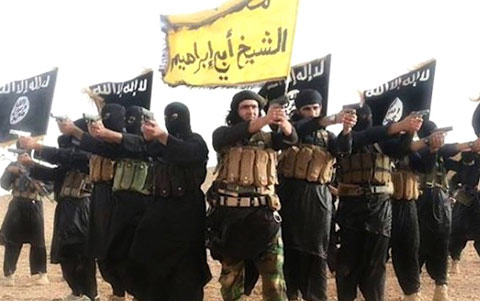 This article was originally published by Kurt Nimmo at Infowars.com.

Editor’s Note: The 2016 race has unofficially begun, and the fear-based rhetoric that will drive it has been shaped as well. A Des Moines Register/Bloomberg Politics Iowa Poll taken in conjunction with the Iowa Freedom Summit found that concern about terrorism ranked as the top issue among likely Republican caucus-goers, while likely Democrats were more concerned about unemployment and jobs.

“(Terrorism) will be more of an issue than it has been in 2012 and 2008,” said Lai, who researches terrorism and the interaction between domestic politics and international relations. “With the rise of ISIS and the events in France, I think you’ll start to see more of a discussion of how the U.S. should address the terrorist threat.”

As with the Bush years, where the 9/11 attacks drove the public into an easily-manipulated state of fear, the concerns about ISIS being a patented creation of Western intelligence while be obscured, while fear of the group, with highly publicized executions and brutal rampages, may likeley justify new ground wars, more military spending, even more spy powers and restricted respect for Americans’ rights.

Manufactured Terror, Not the Economy, Will Dominate 2016 Election

Propaganda and the endless horror of ISIS sensationalized by the establishment media will overshadow worries about the economy during the next election.

According to McClatchy, terrorism is the number one issue dominating the political debate leading into next year’s election.

Americans are increasingly worried about terrorist threats and want heightened readiness and a tough response. A recent Pew Research Center survey found combating terrorism inching ahead of the economy as Americans’ top priority for Obama and Congress. Two-thirds were concerned that the Islamic State was a major threat to this country.

More than a decade has passed since the attacks of 9/11 and not one terror attack — excluding the highly suspicious and Hollywoodesque Boston marathon bombing — has occurred in America.

The FBI has staged a large number of ludicrous terror plots, most planned by mentally deficient individuals manipulated by informants. Serious terror plots, however, are virtually nonexistent despite the endless hyperventilation by the establishment media.

A person is more likely to be struck by lightning than end up a victim of a terrorist attack. Medical error, heart disease, accidents, cancer, and diabetes are more likely to strike down Americans, but these are not election season concerns.

The drumbeat of horrors keeps the apprehension fresh. The beheadings of hostages, the killings at the offices of satirical Paris-based magazine Charlie Hebdo and the burning alive of Jordanian Lt. Moaz al Kasasbeh intensify the concern.

Republicans, far more than Democrats, have for months sensed an opportunity to use terrorism policies to their advantage, and aren’t relenting.

Although the media has largely refrained from showing the video of the alleged immolation of Jordanian pilot Lt. Muath al-Kaseasbeh, others have not displayed such squeamish as the march into yet another war is organized and propagandized.

“Western media has fiercely debated the ethics of publishing execution videos released by the Islamic State jihadist group; some insist that showing the graphic images derived from them is, in fact, doing what ISIS wants. However, it would be difficult to argue that the reality of the terror group’s barbarism should be kept from the public — especially on a national security matter so relevant to the public interest,” writes Brandon Darby for Breitbart.

“Breitbart News here provides the entire video of ISIS burning a Jordanian pilot alive. The complete evil of Islamist ideology is visible in the graphic video. Though controversial, it is the belief of senior management at Breitbart News that the horror of ISIS should be visible for national decision makers, the constituents who elect them, and the Americans who may be called upon to fight them.”

Indeed, Americans may be “called upon” to sacrifice their lives to combat this manufactured threat, a threat that in no demonstrable way threatens the American people.

Each supposed terror event — from questionable beheadings to unverified mass executions and now medieval death by fire — is being used to drum up the required consensus to keep the clash of civilizations agenda and the war on terror moving along its trajectory.

Terror will undoubtedly be the centerpiece of the next election. Candidates will square off on what response should be followed, including sending yet more Americans to die.

Republicans argue that weakness from the Obama administration, including the withdrawal of combat troops from Iraq, allowed the rise of the Islamic State. “We should not be surprised,” former Virginia Gov. James Gilmore said of Tuesday’s murder. “When the good guys step out and leave a void, the bad guys step in and fill it.”

Bad guys, from al-Qaeda to al-Nusra and now the Islamic State, facilitated by the United States and its partners, primarily Saudi Arabia, the kingdom responsible for the Wahhabist fanaticism driving the ideology of the Islamic State and other Salafist terrorists.

The war machine needs al-Qaeda and the Islamic State in the same way it previously needed an evil Soviet Union to legitimize the theft of trillions of dollars from Americans terrorized by the supposed prospect of thermonuclear annihilation.

The Soviet threat, like today’s vastly overplayed threat of al-Qaeda and ISIS, was invented by the government and the military industrial complex.

“As a growing number of historians have realized for years, the so-called Cold War was largely an illusion – known as ‘policy by press release’ – invented by the military industrial complex, the same folks who are selling us new wars and conjured-up threats from the likes of al-Qaeda and now the so-called Haqqani network,” I wrote in 2011.

As the historian Antony Sutton documented, the Soviet Union’s greatly exaggerated prowess was the result of the transfer of technology from the West. An enfeebled Soviet Union with one foot in its agrarian past and led by a dysfunctional communist bureaucracy never seriously threatened the United States.

Likewise, the Islamic State. It is not a threat, least of all to America. Iraq and Syria, two nations weakened by manufactured wars, would certainly be able to sufficiently deal with the threat of a few thousand jihadists if not for the meddling of the United States.