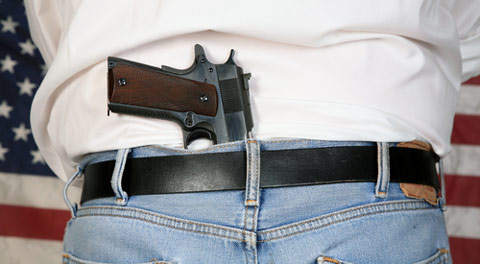 For those who have always believed that it can’t happen here, think again, because it IS happening, and things are only going to get worse as data surveillance becomes a way of life.

Gun confiscation at the hands of medical records sharing is now officially a reality, with serious consequences for the individuals involved.

Now, under ObamaCare, the United States is on pace to swiftly become a snitch society that would make East Germany and Soviet Russia blush.

One former Navy man and 30-year police force veteran is suing the relevant authorities in New York after four of his legally registered firearms were confiscated as a result of his seeking voluntary treatment for insomnia.

Despite the fact that he has no criminal record, was diagnosed with only “mild depression” and his record explicitly noted that there was no concern for violence, the man was listed as a “mental defective.” And thanks to New York’s “SAFE Act” for Secure Ammunition and Firearms Enforcement Act of 2013, his weapons were seized by the local sheriff’s office after his records were shared and New York State Police made repeated requests for confiscation, as American Thinker reported:

According to the suit, the hospital diagnosed the plaintiff as “mildly depressed,” and his clinical evaluation stated, “Patient has no thoughts of hurting himself. Patient has no thoughts of hurting others. Patient is not having suicidal thoughts. Patient is not having homicidal thoughts…” and “there is no evidence of any psychotic processes, mania, or OCD symptoms. Insight, judgment, and impulse control are good.” The suit further alleges that a psychiatrist told the plaintiff, “I don’t know why you were referred here. You don’t belong here.”

Nonetheless, the suit contends that five days after being discharged from the hospital, the local sheriff’s department showed up at Montgomery’s door and seized his four registered handguns, including his former duty sidearm, after the sheriff had been subjected to “repeated pressure” by the New York State Police, who claimed that Montgomery had been declared mentally defective and had been involuntarily committed to a mental institution.

Montgomery alleges that the hospital violated his privacy by transmitting his medical information to the State Police without his consent or knowledge. Montgomery subsequently requested a hearing to have his handgun ownership permit reinstated, but the sheriff’s department allegedly terminated his permit without a hearing.

The plaintiff, Donald Montgomery, filed a lawsuit against numerous parties connected to the incident, including Gov. Andrew Cuomo, Vincent DeMarco, Sheriff of Suffolk County, and Joseph D’Amico, Superintendent of the New York State Police, alleging violations of several of his Constitutional amendments, including violations of the safeguards for the right to bear arms, for privacy, against unwarranted search and seizure, for due process and for equal protection under the law.

“This lawsuit alleges the creation, implementation, marketing, and use of a reporting system for medical professionals to transmit personal health information to the State pursuant to NY Mental Hygiene Law § 9.46, enacted January 15, 2013 as part of the “New York Secure Ammunition and Firearms Enforcement Act” violates the civil liberties of the Plaintiff and all other persons similarly situated, including his/their rights under the Second, Fourth, Fifth, and Fourteenth Amendments to the United States Constitution. The State has amassed the confidential, personal health information of tens of thousands of people into a database shared by various State agencies… [which] includes, but is not limited to, any mental health diagnosis of a patient… “

At the heart of this issue here is not only how “mental health” designations are now being used to restrict gun rights, but how the medical profession is now breaking the doctor-patient privilege to become an informant against the patient, and reporting them to an expansive government and law enforcement database. This is taking place without the knowledge of the patient, or even the right to find out what is written in the record, and, further, it is happening without any criminal act or wrongdoing taking place or even being suspected.

The lawsuit alleges that prior to New York’s SAFE Act, which was passed under rushed “emergency” legislation rules:

“the statutory standard for a break in the confidential doctor-patient relationship leading to a report to a law enforcement officer was ‘a likelihood of serious harm to self or others,’ meaning ‘a substantial risk of physical har[m] to self as manifested by threats of or attempts at suicide or serious bodily harm or other conduct demonstrating that he is dangerous to himself or a substantial risk of physical harm to other persons…”

None of this had been alleged against Montgomery, yet he and tens of thousands of others in a similar designation were reported to law enforcement and government databases, constituting a major breach of the doctor-patient relationship and a drastic change in policy both in the state of New York, and more broadly throughout the United States.

And the trend is continuing under the guise of gun safety and ‘common sense’ background checks.

Numerous passages in President Obama’s 23 executive orders concerning mental health and gun control issued in the wake of the Sandy Hook shooting sound eerily similar to what happened to Montgomery in New York State, with the White House effectively tapping doctors to amass data on gun owners during patient visits:

• “Address unnecessary legal barriers, particularly relating to the Health Insurance Portability and Accountability Act, that may prevent states from making information available to the background check system.”
• “Improve incentives for states to share information with the background check system.”
• “Direct the Attorney General to review categories of individuals prohibited from having a gun”
• “Clarify that the Affordable Care Act does not prohibit doctors asking their patients about guns in their homes.”
• “Release a letter to health care providers clarifying that no federal law prohibits them from reporting threats of violence to law enforcement authorities.”
• “Release a letter to state health officials clarifying the scope of mental health services that Medicaid plans must cover.”
• “Commit to finalizing mental health parity regulations.”

It was recently reported that a ‘National Database Warehouse’ is underway to store and manage the massive quantities of information being collected under ObamaCare:

The Department of Health and Human Services (HHS) is looking for vendors to run its “National Data Warehouse,” a database for “capturing, aggregating, and analyzing information” related to beneficiary and customer experiences with Medicare and the federal Obamacare marketplaces.

Despite what may be the best intentions on the part of the government, these policies are being misused through the use of massive databases that contain sweeping information, and amount to a pre-crime Stasi culture that encourages secret reporting and an atmosphere based upon suspicion rather than evidence, at the expense of one’s rights without even committing a crime.

And there have already been other abuses.

Police confiscated firearms from a man named David Lewis, before later admitting they had taken them from the wrong man:

“Erie County Clerk Chris Jacobs said that late today he received a call from the New York State Police informing him that they had provided information on the wrong person when they notified his office of someone whose permit should be suspended because of the new mental health provisions in New York’s SAFE Act,” the release begins.

“When you write a piece of legislation in a vacuum, without having hearings, without talking to people about how it’s going to implemented in the real world — without jeopardizing people’s rights, and putting an individual like this through a nightmarish experience, and infringe on their rights, you have to go back to the drawing board,” he said. “And I encourage the legislative leadership here and mostly our governor to take a step back and say ‘we didn’t get it right’ and let’s change this.”

Ultimately, it will discourage people with legitimate needs from seeking medical treatment due to fears that their records will result in a police visit or an official classification that irreparably misrepresents their status or intentions.

As the American Thinker noted:

In the old Soviet and East German police states of the Cold War, police kept secret files on scores of common people. Information was fed to the police by thousands of clandestine sources – and a seemingly banal or routine interaction with nearly anyone could lead to a surprise “knock on the door” by authorities. During the late Soviet era, communist leadership moved away from the executions and purges of the Stalin years and began to increasingly rely upon medical professionals to diagnose “enemies of the state” as insane – thus, a routine trip to your doctor could lead to a visit from police.

Does This Look Like A Housing Recovery To You?