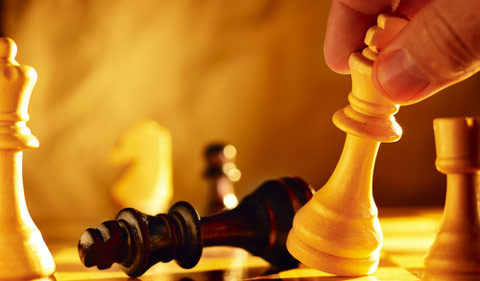 To say that the U.S. economy is in trouble would be an understatement. According to Shadow Stats economist John Williams, we may be on the very cusp of a crisis so severe that it promises to re-write the entire paradigm. Debt is out of control and foreign holders of U.S. Treasury bonds are getting antsy. Nowhere is this more obvious than in China and Russia, where leaders of the globe’s other super powers are feverishly working to distance themselves from the U.S. dollar by establishing new monetary relationships that completely bypass the world’s reserve currency.

A loss of confidence in America’s ability to manage its fiscal, economic and monetary policy coupled with a continued slowdown in growth could soon reveal what Williams calls “the end game.”

“I can’t give you good reason for why the stock market is as high as it is. The fact you are seeing this volatility means there are a lot of people who are very nervous about what is going on and where things are in the market. It is probably one of the great bubbles of all time. It most likely will collapse along the lines of the U.S. dollar in response to the reality of no economic recovery. . . . I can’t think of a more vulnerable market than what we are seeing here.”

You are getting a confluence of extraordinary factors that are coming together that will cause the dollar to break. You’ll have a panic flight from the dollar along with dumping of U.S. Treasury bonds by foreign owners. We are coming in on the end game here.”

“I have had a lot of calls from clients recently to that effect, yes. I can tell you what they are seeing in terms of their business, after adjusting for inflation, and that’s using the government’s inflation number; they are not seeing any sales growth. How can you have no sales growth in 80% of the economy and have a booming economy? It’s not happening.”

Since 2010 John Williams has repeatedly warned of a coming hyperinflationary event that will leave the United States decimated. With the loss of purchasing power of the U.S. dollar will also come disruptions to the normal flow of commerce, including domestic supply chains.

As the dollar breaks down, you’ll also likely see disruptions in supply chains, including shipments of food to grocery stores. People should consider maintaining stockpiles of basic goods needed for living, much as they would for a natural disaster.

I have a supply of goods and basic necessities in case something terrible happens-natural or man-made-that will carry me for a couple of months. It may take that long for a barter system to evolve, which I think is what you’re going to end up with; at least until a new currency system is reorganized and you get a government that’s able to bring its fiscal house into order.

It’s an effect we saw happen in Greece several years ago when debt levels got to such levels that no one was willing to lend the collapsing nation any money. This led to a widespread breakdown – people were fighting for food, life-saving medicines were unavailable, power regulators almost shut down electricity to the entire country, and barter networks sprung up because money was simply not available to the average person.

What became valuable in Greece is exactly what you might expect – physical assets.

The price of precious metals sky rocketed on the streets of Greece. Those with food were able to barter for other services. And those with specialized skills were able to trade their labor for essential goods.

The situation was dire, but with the U.S. and Europe eventually offering up billions of dollars in bailouts a complete collapse was averted.

This left many people with the impression that no matter how bad things get, there will always be a bailout.

But what happens when America experiences a similar crisis? Who will have enough money to bail us out? Which country will be willing to cough up trillions of dollars to support the U.S. financial system and economy?

Former Treasury Secretary Hank Paulson, who presided over the collapse of 2008, has said that the United States was on the brink of collapse. At the time Congress was warned that failure to pass the bank bailouts would have led to tanks on the streets of America.

Considering we have yet to resolve the fundamental issues that plagued our economy then, how bad will it get when the next crisis unfolds?

As Greece was falling apart one of our contributors contacted us to share how desperate things had gotten.

“My shotgun is full and well equipped. I hope i don’t need to use it.”

This is coming to America. Ayn Rand once said that we can ignore reality, but we cannot ignore the consequences of reality.

If you haven’t take steps to do so, it’s time to get prepared for the consequences.

Obama Harassing His Media ‘Enemies’? “Whoever is doing this has extremely advanced technical capabilities”