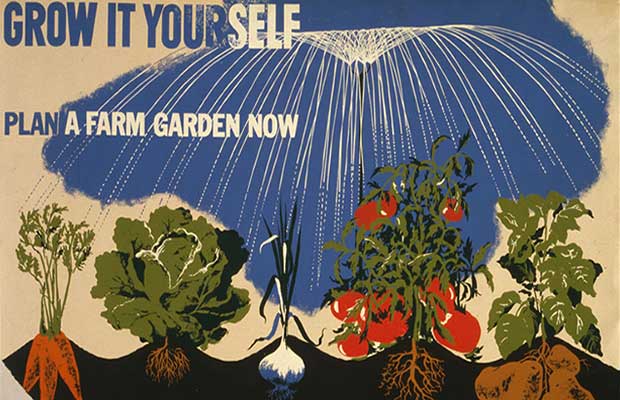 As the U.S. government begins scaling back its Food Stamp Program, I wonder how 48 million recipients (almost 1 of every 6 Americans) are being advised to make the transition to reduced or discontinued benefits. Cuts loom ahead, too, for Social Security and other programs.

Is home gardening ever encouraged as a way to offset the escalating cost of, well, just about everything?

Some say it would be cruel to ask people to grow some of their own food as Americans did during the first two world wars. Literature from those eras, however, indicates people felt good about contributing, they saved money, enjoyed better health and had fun gardening with their families and communities.

We can certainly attest to all those rewards. Also, we are assured our food is organic. How did gardens (and clotheslines!) ever become symbols of poverty anyway? We consider them icons of abundance, fitness and good stewardship.

One of my favorite gardening guides is a World War II booklet put out by International Harvester Company that covers everything from cold frames to compost, pest control and root cellars.

“Get at the garden in time. Make a plan for it. Hang it on the wall. Talk about it … Make up your mind when you will plant the different things — then plant them,” the booklet advises.

I found the 80-page booklet among some old cookbooks. It had obviously been referred to many times through the years, and even has a carefully mended front cover. Although the photos are tiny, Page 3 compares a bountiful garden in North Dakota to another where people have lived for years “and still no sign of growing anything to eat.”

“Grow Your Living,” the booklet warns. “It May Not Be Available for You to Buy.”

When International Harvester composed the booklet, the food stamp program was new, initiated as a temporary benefit that was discontinued two years before the war ended.

We hope last week’s Electronic Benefit Transfer system debacle in Louisiana does not reveal how people will behave if they fear their benefits might cease or food becomes scarce.

During a two-hour glitch that temporarily disabled EBT card limits in several states, Walmart shoppers in two Louisiana stores filled their carts to overflowing. Some customers reportedly pulled trains of 8 to 10 carts through the store or returned for more free groceries after bringing one load home, according to online reports.

When the system was restored, people abandoned their full carts in store aisles and checkout lines. One Springhill woman walked away from her $700 bill at the checkout as she had only 49 cents on her card.

Meanwhile, we wonder – what were people thinking? Did they fear the system was down for good and they needed to stockpile? (Hoarding food is never a sustainable solution.) Have people become utterly dependent on the system?

The U.S. Department of Agriculture’s Food Stamp Program has been reworked a few times since it was created in May 1939. It was discontinued from 1943 to 1961 “since the conditions that brought the program into being—unmarketable food surpluses and widespread unemployment—no longer existed,” according to the USDA website. So, it is not unthinkable the program could disappear again.

Originally, recipients bought stamps that came in two colors: orange for any food product and blue for surplus. For every dollar of orange stamps bought, the buyer received 50 cents of blue stamps for free, which were exchanged for agricultural surplus items, such as milk, eggs or cheese.

In 1961, President John F. Kennedy introduced a food stamp pilot program that no longer included surplus foods. The stamps still were purchased, although the cost was incrementally reduced. The USDA maintained that stamps should continue to be sold so as not to undermine the dignity of recipients. Three years later, Congress made the Food Stamp Program permanent.

The next major change came in 1977 when food stamps were no longer required to be purchased. The move to stop selling stamps disappointed many who had supported the program as a means to help the poor help themselves, not as a direct government handout.

Last month, the government announced a $4 billion food stamp budget cut that will affect everyone on the program now and for future applicants. An estimated 4 million people will be cut from the program in 2014. It is estimated that at least 1 to 3 million will be cut each consecutive year for the next decade.

FoodStamp.org posted some reconstruction solutions, which includes removing illegal immigrants from the program. Currently, children born to illegal immigrants in the United States are entitled to benefits, as are their illegal alien parents. Is it any wonder we can no longer support this program?

Proposed agricultural solutions include farmers markets, donations and co-ops where recipients work for their food. FoodStamp.org says these solutions “seem barbaric to some progressives and others.”

A few quick online searches revealed little practical preparation ideas for recipients to wean themselves from the program. FoodStamp.org suggests that single, able-bodied participants find work or create a nutrition plan such as vegetarianism or a sustainable and self-reliant food lifestyle.

Another option is to combine vegetables with meat, grains, dairy, or other foods to make them last longer throughout the week. FoodStamp.org goes on to recommend ways to make vegetables more interesting, especially for children, by smothering them in dips and sauces. Or, coat celery sticks with peanut butter and decorate with raisins. Also, exchange recipes with Facebook friends.

Some of this seems silly to me, but is actually more advice than I found on the USDA’s site. To its credit, FoodStamp.org also included a short blog about gardening as a suggestion. The food stamp program now allows recipients to buy seeds. Finally — an idea for sustainability.

The USDA was not initially keen on promoting home gardening. When First Lady Eleanor Roosevelt planted a vegetable garden on the White House grounds, USDA leaders worried her example would hurt industrial agriculture.

Eventually, however, the government endorsed household and community food plots and supplied gardening literature. The USDA also issued a 20-minute film to promote and train people how to plant victory gardens.

The call to plant a Victory Garden was answered by nearly 20 million Americans during World War II.  Those backyard plots produced up to 40 percent of all that was consumed. When prosperity resumed, however, many gardens were abandoned.

Today, as food prices continue to climb and more people are unable to feed their households as before, it is time to relearn those skills. As they did in Cuba when their economy collapsed, we should be planting food anywhere we can – on rooftops, in window boxes, along the sidewalk, next to the garage – anywhere there is dirt. Even without soil, a couple big jars of sprouts growing on the kitchen counter are an excellent source of nutrition.

Modern gardening experts such as Marjory Wildcraft and John Jeavons say we don’t need to plow up the whole back 40 to feed our families. Marjory laughs how she made the mistake of tilling an entire acre for her first garden and ended up with an acre of weeds. Instead, she says now, start small – and keep growing.

Perhaps it is time to bring back Victory Gardens.

Frequent contributor, Linda Holliday lives in the Missouri Ozarks where she and her husband formed Well WaterBoy Products, a company devoted to helping people live more self-sufficiently off grid, and invented the WaterBuck Pump. A former newspaper editor and reporter, Holliday blogs for Mother Earth News, sharing her skills in modern homesteading, organic gardening and human-powered devices.
If you found this article useful, please Vote for The Prepper Journal as a top prepper web site.