Last week the U.S. Supreme Court gave Texas the go-ahead to enforce voter identification laws at the polls. The court rejected an emergency request from the Justice Department and civil rights group to overturn the law with a majority of Justices on the court siding with Texas.

The move has liberals all over the country up in arms because the legislation opens the door for other states to move in lockstep with Texas.

Though the majority did not issue a statement, a dissenting opinion from liberal judges that included Justices Ruth Bader Ginsburg, Sonia Sotomayor and Elena Kagan, says that the law is purposefully discriminatory.

“The greatest threat to public confidence in elections in this case is the prospect of enforcing a purposefully discriminatory law, one that likely imposes an unconstitutional poll tax and risks denying the right to vote to hundreds of thousands of eligible voters.”

At the Huffington Post, a liberal hotbed of progressive ideas, readers took to their keyboards to show their outrage over the new law.

The law, which allows for seven (7) different methods of identification at the polls, has been attacked, among other things, as an attempt to instill white rule over minorities:

College ID cards are not considered legitimate identification, while a concealed carry handgun licenses have been approved. Apparently, some liberal commentators don’t realize that a non-citizen can acquire a college ID if they attend school in the United States. A concealed handgun license however, requires a detailed background check… and citizenship, though some (LEGAL) resident aliens can acquire a license under certain guidelines:

We agree, it’s certainly voter suppression if you are not a legal resident of the United States of America, and rightfully so.

And, of course, there’re those who claim this is a “poll tax” because it costs money to obtain an identification card to vote.

As it turns out, the aforementioned Texas Election Identification Certificate is free of charge, but yes, the poor and old do need to travel for it, just like they might have to travel to actually vote, go to the grocery store, seek health care or take money out of their bank.

And then there’s this guy, who suggests that this is about men versus women, because, well… we’re not really sure why:

And, of course, no liberal comment thread is complete without accusations of racism against those who want to ensure the legitimacy of the electoral process:

Now that you’ve read the blathering on about how this law is racist and disenfranchises poor people who apparently do not require identification to seek welfare, health care, food stamps or other government services, here are the facts.

These are the acceptable forms of identification at Texas polling stations. A precursory look at the list and you’ll realize that 99.9% of Americans of voting age have to have at least one of these to function on a daily basis:

And for those who complain of a polling tax, it turns out that the State of Texas has a web site page dedicated specifically for people who do not have the money to pay for an identification card.

In addition to the scores of comments claiming racism, poll taxing and other ridiculous arguments against the ID requirement, there were others who understood the purpose of the law, especially in a state that has seen illegal immigration skyrocket: 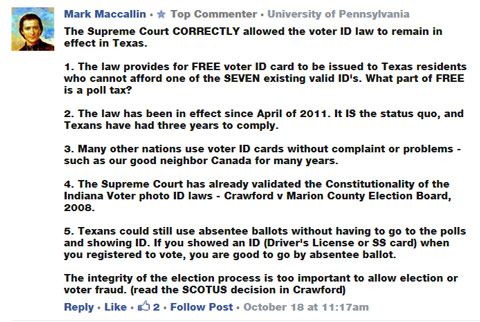 User Maggie Lin pretty much sums it up:

What do you think? Are voter ID laws designed to suppress the vote of poor people and minorities?

Or, is an identification requirement, given the millions of illegal immigrants making their way into the United States, a necessity in order to ensure the legitimacy of our elections?