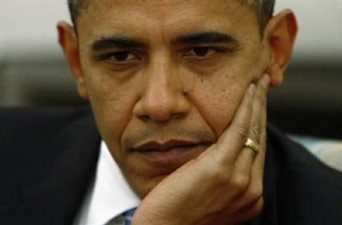 Liberal journalists are now claiming that Americans who use the term #Obola are racist and xenophobic, continuing the trend whereby any criticism of President Obama is hastily characterized as a racial slur.

In an article for the Verge entitled Ebola panic is getting pretty racist, feminist journalist Arielle Duhaime-Ross blames Dinesh D’Souza and Michael Savage for popularizing the hashtag #Obola as a “racist xenophobic….banner to rally around,” despite the fact that the meme patently represents a witty encapsulation of what many see as the federal government’s botched response to the Ebola outbreak and the failure to block flights from West Africa in the name of political correctness.

Duhaime-Ross argues that “white privilege….is floating to the surface” in the aftermath of the Ebola outbreak, a theme mimicked by Rev. Jesse Jackson who this week blamed “white privilege” for Ebola victim Thomas Duncan not getting the treatment he needed.

Vox’s Dylan Matthews also accuses Dinesh D’Souza of taking on a “conspiratorial, hyperbolic tone” after the conservative activist asked his Twitter followers, “Which is worse: EBOLA, the disease; or OBOLA, the dream from his father?”

Meanwhile, Salon.com ties together a grand Ebola conspiracy, alleging that the right is forging a “plan to sweep the midterms” by fanning the flames of racist fears over Ebola, ISIS and the porous southern border. The fact that it was National Border Patrol Council spokesman Chris Cabrera who earlier this week sounded the alarm over hundreds of illegal aliens from Ebola hot zones like Liberia crossing the border is not mentioned in the piece.

The attempt to diffuse any criticism of Obama by playing the race card is by no means a new phenomenon, and has been utilized innumerable times over the years to demonize opposing voices.

The situation bears some resemblance to a previous controversy when some denounced posters depicting Obama as the Joker out of Batman as racist despite the fact that an almost identical image was used to lampoon George W. Bush, in addition to the author of the Obama Joker posters being a politically independent Muslim-American.

MSNBC host Carlos Watson went further, wondering aloud whether the word “socialist” was “becoming a code word, whether or not socialist is becoming the new n-word for some angry upset birthers and others.”

Duhaime-Ross and her ilk will presumably be nonplussed by a new line of Infowars t-shirts which feature the Obama campaign logo embedded inside the word ‘Ebola’.