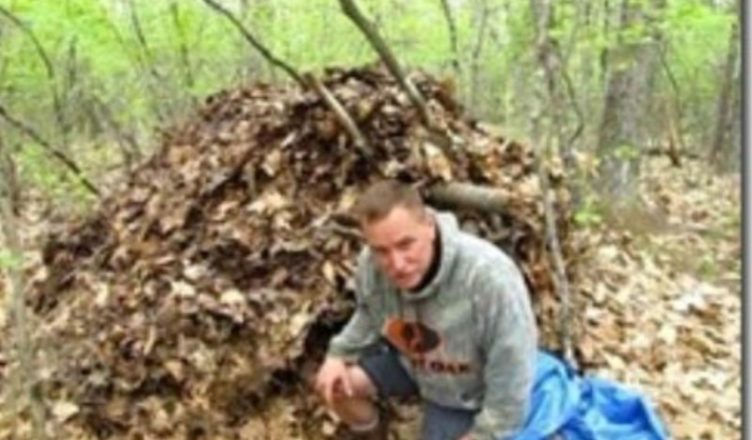 I was recently able to attend the Maine Primitive Skills School in Augusta, Maine.  Over the years I’ve spent a lot of time in the forests here in Maine and I’m very comfortable in that environment; however, I know what I don’t know.  Any woodsman will tell you they are always ready to learn more and that’s where I found myself. Jarhead getting ready to enter the shelter

Why take a wilderness survival course, or a primitive living class?  Everybody had their own reason for coming.  I wanted the experience and to fill in the gaps of knowledge that I knew existed in my own learning.  Joe lives roughly between New York and Boston and wanted to be able to survive in the wilderness in case of a bug-out situation.  Same for Brian.  Charley had never taken a class like this and when I told him I was going he said, “Cool!  Where do I sign up?” The only real downside to the class was the black flies.  If you live in the northeast you’re aware of these pesky swarms of little terrors.  In the video you can see them swarming around us.  Nothing that 100% Deet couldn’t handle though! I decided to take the three day Earth Living Class.  Here’s the class description:

Cultivate a relationship with the landscape that manifests bounty. Earth Living is an approach to thriving in the wilderness through developing awareness of cues in the landscape to find important resources and information.  Whether you feel the calling to have a deeper connection with nature, or you are a seasoned backpacker, camper, or sportsman, this course will bring you to the edge of your abilities and provide you with new tools to bring your outdoor experiences to the next level. Read the environment to determine your shelter location, water sources, fire making materials and wild foraged food and medicine.  Investigate the forest to decipher its history or find your way home.  Strengthen and utilize your innate ability to make meaningful connection to the landscape.

The part that resonated for me was taking me to the edge of my abilities and providing me with new tools to bring my outdoor experiences to the next level. Mike Douglas, the owner and chief instructor,  tells you straight up in the first class that whatever we learn over the weekend is only the beginning of the journey. What he teaches can be the basis of years of learning on how to exist in nature without the accouterments of modern civilization. Also Read: 8 Mistakes of Wilderness Survival The format to the class is about ten to thirty minutes of classroom instruction followed by an intense hands-on experience putting into practice what we just learned.  The hands-on can last anywhere from ten minutes to a morning or afternoon, but when you’re finished you know that you can perform the skills necessary to survive.

You need a minimum bit of gear for the class.  Knife, water bottle, sleeping bag, tent, and a few other odds and ends you can find on his website.  I used my new Tops BOB knife, which I’ll review in full later (hint:  it’s freakin’ awesome.) I used a military sleeping bag, which was perfectly fine for this class.  The tent was a two man tent that opens from the side, which I thought was a cool idea until it rained and I had to open the tent flap and water splashed into my bag.

Did The Class Deliver?

Promising someone they are going to be taken to the edge is a big commitment, but these guys deliver.  The class basically follows the Rule of 3’s of survival: View of the unfinished front of the shelter

You can survive: 3 minutes without air 3 hours without shelter 3 days without water 3 weeks without food. Mike maintains that the most important thing you can have is a positive attitude with the right focus in order to survive if you find yourself in that situation and that is the topic of the first two hours of class.  If you don’t have the will to live you probably won’t in an extended survival scenario. I arrived at 7:00 PM on Friday night and the first couple of hours of class were about attitude and centering yourself in nature.  The next morning Mike blew the conch shell at 6:30 am, which is the signal to get up and get ready for the day, and we got busy learning around 8:00 am.

https://www.youtube.com/watch?v=0-M58fkXk3k The first half of Saturday we talked about shelter and its importance in a survival situation.  One of the best shelters you can build in a survival situation is a debris hut.  The upside is you don’t need tools to build one, just the knowledge of how to make one and the gumption to do it.  See the video below for details on how to make it. Also Read: Easy Tarp Shelter The downside is that four of us worked a steady two hours to create this structure, which means it would take one person roughly eight hours to do the same amount of work.  It is a lot of work, but in a survival situation you do what you have to do.  One of my friends attended the class with me and volunteered to spend the night in the shelter.  It rained that night and I was in my tent wondering how he was doing.  The next day he said it was warmer and drier than sleeping in the hammock he’d brought with him!  Watch the video to see what happens when Mike poured five gallons of water directly on him.

Once you’ve secured shelter you work on creating fire.  We used a bow drill to do this and I was able to create my first friction fire, which paid for the class as far as I was concerned.  I’ve tried in the past and was very close to doing it; however, could never quite get the coal.  I’ve done a lot of swearing and throwing of perfectly good bow drill sets because I was missing one tiny little thing:  lubrication.  I wasn’t lubing up the spindle and the bearing block.  You wouldn’t think it would matter that much, but as soon as I did it I had a beautiful coal and that led to a fire within minutes.  Honestly, it was so easy I was embarrassed I hadn’t been able to do it before.  I actually came home and the next day went out in the woods at my house and made a set from materials out there.  I had a fire within minutes. Also Read: Wilderness Survival Part 1 One of the great things about the class is that everybody is recognized for their achievements.  When you get your first fire everybody in the class yells, “Fire!” and the cry is picked up around the school and anybody in hearing range yells it back.  There were four of us and we all made fire, so it was a great experience to be able to yell Fire! as my teammates created their own success.

The water portion of the class was taught by an apprentice named Colby.  Honestly, he looks a little like a wild man with long hair, but when he starts talking you’d be wise to listen.  He knows his stuff and has spent much time in different countries learning and practicing how to live off the land.  He was a bit stand-offish at first; however, as we all hung together he started in joking with us and I found him to be an engaging and experienced teacher. We studied water tables, how they come into existence and how they get polluted and the various ways to clean your water before drinking it.  It was a comprehensive class and afterwards we went for a walk around the MPSS (Maine Primitive Skills School) grounds and got to see examples of springs, how they appear and disappear, and other relevant water related items.

Saturday evening was a practical application on how to make tools with fire.  We were given the task of creating a spoon by burning a hole in the wood and then whittling around it.  It was after dinner by this time and this was an activity we did around the campfire.  You can create bowls, spoons, and other items this way and it was a laid-back activity with the class lounging around the fire and chatting.  At one point I got my guitar out and played a few songs, then handed the guitar off to one of Mike’s sons who had come to hang around the fire with us, before going to back to work on my spoon.

Sunday morning was about food.  In the first portion we went on a plant walk with Mike, who is like a wilderness encyclopedia when it comes to plants.  He understands the application Native Americans had for them, their scientific genome and uses, and just about anything you could ask him. The next portion of class centered around trapping including both modern trapping (taught by one of Dave Canterbury’s students) and traps made off the land such as a Figure 4 trap.  We also talked about throw sticks and got to practice on stationary and moving targets.

Mike is a smart guy and he believes passionately in living with the land, not off it.  He’s a very eloquent and compelling speaker and it’s easy to tell that he’s in his element when he’s in the woods showing someone how to do what he does.  Everybody at the class, Mike, the cadre of instructors, and the students, were all very pleasant and easy going.  There was no boot camp mentality to this class and no hardcore, “You can’t use that propane stove because it’s not primitive!” mentality.  Just a bunch of cool people all wanting to learn something from someone who could teach it to you. Jarhead peaking out from the shelter.

There are many different classes you can take at his school that you can see here.  As with anything, it’s best to pick and choose the things that fit your personal needs and ignore what you don’t need or what doesn’t interest you. Some classes go for five days and others go just for the weekend.  Mike is well aware of the time crunch people in today’s society are under and modified many of his classes into both five day and weekend classes.  Some day I’d like to go back and take a five day class.  As you progress they put you in the wilderness with less and less gear until you can survive comfortably with very little, if any, gear.  That’s the class I’d eventually like to get to! If you’ve never taken a wilderness survival class and it’s something that interests you I’d highly recommend this one.  If not Mike’s school then attend something nearby to you and hopefully you have as positive an experience as we did in our class.

In the near future I’ll be writing more about the things we learned at the school.  Primitive fire making, trapping, and other cool stuff, plus videos.  I shot a ton of raw footage while I was there with Mike’s blessing and I’ll try to make some comprehensive How-to videos based off what I have. Questions?  Comments? Sound off below!