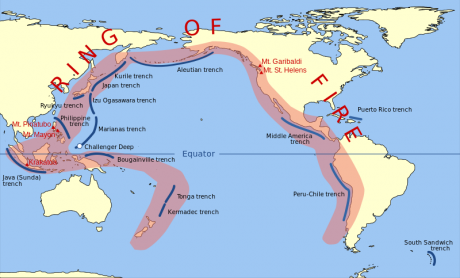 So far this week, we have seen the most dangerous volcano in Mexico erupt, and three major volcanoes in Indonesia all erupted within the space of just 72 hours.  Mexico and Indonesia are both considered to be part of “the Ring of Fire”, and all along the perimeter of the Pacific Ocean volcanoes are starting to go off like firecrackers right now.  According to Volcano Discovery, 25 volcanoes in areas that are considered to be within the Ring of Fire have erupted recently.  Our planet appears to have entered a time of increased seismic activity, and those the follow my work regularly know that this is a theme that I revisit repeatedly.  Sadly, most Americans are not paying too much attention to this increase in seismic activity, but the truth is that it has very serious implications for the west coast of the United States.

It didn’t make a big splash in the mainstream media in the United States, but this week Mt. Popocatepetl erupted and coated homes and vehicles in Mexico City with a thick layer of volcanic dust.  And now some scientists are becoming concerned that this recent activity may be building up to “a major disastrous eruption”…

Residents of Mexico City woke this morning to find ash coating cars and buildings after the Popocatepetl volcano belched out another toxic cloud.

The volcano is considered one of the world’s most dangerous due to its proximity to the city with more than nine million inhabitants.

Around 25 million people live within 62 miles of the crater of the 5,426-metre magma mount, who could also be affected.

There are fears the peak is building towards a major disastrous eruption after activity increased over the past few years, although, it has been periodically erupting since 1994.

There is a very good reason why Mt. Popocatepetl is considered to be the most dangerous volcano in Mexico.  If there ever is “a major disastrous eruption”, millions upon millions of people will be directly affected and it will bring Mexico’s economy to a screeching halt.  The following comes from one of my previous articles…

Popocatepetl is an Aztec word that can be translated as “smoking mountain”, and more than 25 million people live within range of this extraordinarily dangerous mountain. Experts tell us that during the time of the Aztecs, entire cities were completely buried in super-heated mud from this volcano. In fact, the super-heated mud was so deep that it buried entire pyramids. In the event of a full-blown eruption, Mexico City’s 18 million residents probably wouldn’t be buried in super-heated mud, but it would still be absolutely devastating for Mexico’s largest city.

Meanwhile, the nation of Indonesia has been rocked by three significant volcanic eruptions in just a three day period…

Giant clouds of ash engulfed the skies as Mount Sinabung became the third volcano to erupt in Indonesia, in the space of just three days.

Mount Rinjani on Lombok island near Bali erupted on Monday, with the Sinabung volcano on Sumatra island and Mount Gamalama in the Moluccas chain of islands following suit late yesterday.

There are approximately 130 active volcanoes in Indonesia, but this is still very unusual even for them.

But of even greater concern for Indonesia (and for the rest of the planet) is the magnitude 5.8 earthquake that shook Mount Tambora on July 31st.  Back in 1815, an eruption at Mount Tambora was the largest that has ever been recorded, and there are concerns that this recent very large earthquake may be a sign that another mega-eruption is on the way.

If you are not familiar with the 1815 eruption of Mount Tambora, it was truly a historic event.  More than 70,000 people died from the immediate blast, and the climate of the entire planet was cooled substantially for years afterwards.  The following description of that eruption comes from Wikipedia…

After a large magma chamber inside the mountain filled over the course of several decades, volcanic activity reached a historic climax in the eruption of 10 April 1815.[5] This eruption had a volcanic explosivity index (VEI) of 7, the only unambiguously confirmed VEI-7 eruption since the Lake Taupo eruption in about AD 180.[6] (The 946 eruption of Paektu Mountain might also have been VEI-7.)

With an estimated ejecta volume of 160 km3 (38 cu mi), Tambora’s 1815 outburst is the largest volcanic eruption in recorded history. The explosion was heard on Sumatra, more than 2,000 km (1,200 mi) away. Heavy volcanic ash falls were observed as far away as Borneo, Sulawesi, Java, and the Maluku Islands.

The following year became known as “the year without a summer” because the global climate cooled down so dramatically.  There were crop failures all across the northern hemisphere, and as a result the world experienced the worst famine of the 19th century.

Someday, there will be another eruption of that magnitude at Mount Tambora or elsewhere along the Ring of Fire, and the world will experience another horrifying famine.

It is just a matter of time.

And let us not forget that the entire west coast of the United States also sits along the Ring of Fire.  In my novel and in my new book I warn about the coming eruption of Mt. Rainier.  But that is certainly not the only volcano on the west coast that we need to be concerned about.  In recent months there has also been increased seismic activity at Mt. Hood and at Mt. St. Helens.

We have been very fortunate not to have had any major volcanic eruptions in the continental United States since the eruption of Mt. St. Helens in 1980, but scientists assure us that we are well overdue for the next one.

In addition, the Yellowstone supervolcano may not be considered to be directly along the Ring of Fire, but it has also been exhibiting very strange behavior this year as well.  When it finally erupts, all of our lives are going to change in a single moment.

So there are definitely some big reasons why we should be concerned about all of these volcanoes that are currently erupting around the world.  It may not be tomorrow, but eventually Americans are going to see firsthand how a major volcanic eruption can permanently alter their lives.

Have you imagined of a situation with no electrical power,computers,internet,TV and Walmart?Have you thought of how our forefathers survived during their days without all those?Are you aware of what tomorrow holds for you?Well,the truth is,you cannot predict tomorrow,but you can prepare for it,relying on survival skills from The Lost Ways.It is the basic things that our forefathers applied to survive during conflicts,starvations,death,wars and natural calamities,that are reinvented in The Lost Ways program so that we learn from them and not discard such knowledge and wisdom.The Lost Ways offers survival skills for self-sufficiency without investing any money.Click on the video below to learn more: