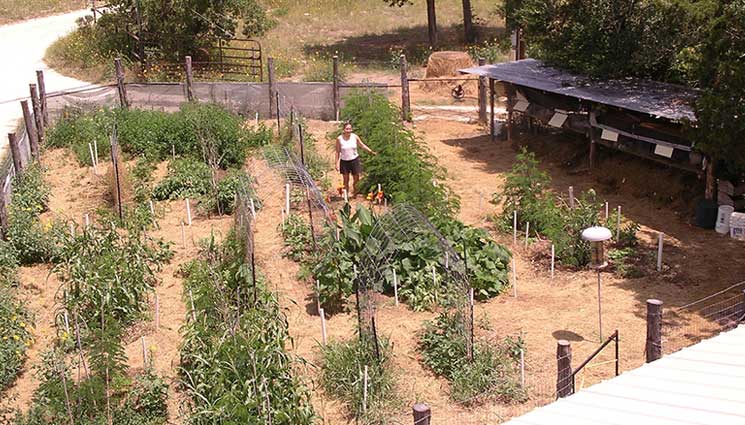 Last summer, when a friend presented me with a set of author Marjory Wildcraft’s gardening DVDs, I thought I already knew everything about growing vegetables. This winter, I finally started watching “Grow Your Own Groceries” and was amazed at how much I didn’t know about rabbits, chickens, compost and bugs.

The home video of Marjory, husband Dave and their kids demonstrates how the family created their self-sufficient homestead. Marjory shows how they made soil from Texas sand and clay, set up rainwater catchment systems, began raising livestock and how more than half their diet now is organic food they grow.

Ninety-five percent of food in mainstream grocery stores is toxic, says Marjory, adding that the United States is no longer food self-reliant as it imports 65 percent of its fuel to grow the major crops of corn, wheat and soy.

“Americans are incredibly under-nourished people,” Marjory said. “I believe it is why so many are so ill.”

After watching the video, I had to learn more about the plucky, humorous, down-to-earth woman who readily admitted her early gardening blunders and showed how to slaughter a rabbit with compassion. Incidentally, Marjory recommends fasting for 24 hours before butchering your first home-raised rabbit – not to combat nausea, but to appreciate why we cultivate animals for food.

Originally a Florida city girl, Marjory didn’t grow up plucking geese, composting grass, gathering wild herbs, harvesting turnips or eating bugs. None of that started until decades later when she “freaked out and panicked” over fear of potential U.S. economic collapse.

In the 1990s when Marjory was an ex-pat electrical engineer working for Motorola in China, an Australian couple mentioned their ideas of permaculture and self-reliance. Looking out from the 46th floor of her Hong Kong apartment, Marjory wondered, “Why would I ever need to know about that?”

Years passed and Marjory left Motorola to become an engineering consultant with clients all over Southeast Asia. She loved the travel, her work and enviable income.  Fascinated by money, she later created a successful real estate investing firm where she managed tremendous amounts of debt for millionaire real-estate investors.  Marjory did well for her investors and immersed herself in everything related to money, the world economy and markets.

Curious where all the money she was managing was coming from, Marjory traced it back to analyze the business models of U.S. government-backed mortgage companies, Fannie Mae and Freddie Mac.

Her research alarmed her. She saw a vulnerable interconnection of mortgage companies, banks, insurance giants and brokers in dire financial and legal trouble.  From her research, Marjory saw global economic collapse as inevitable.

“I said, ‘If they go under, we’ll all be in trouble.’ The dominoes would topple,” Marjory explained when I called to ask about her video inspiration.

In 2001-2002, Marjory began dismantling her consulting business, urging clients to get out of real estate investing before the bubble burst. Although skeptical, they trusted her instincts and later thanked her.

Meanwhile, Marjory continued traveling, this time talking with people who had survived disaster, whether caused by national economic collapse, weather or war. Their common message was that the ability to grow food was crucial to survival.

Dave and Marjory began searching for a homestead, a place where they could grow food year-round and work toward self-reliance. They settled in Dave’s native Texas, an hour’s drive from Austin. They attended forestry, permaculture, rainwater collection and gardening classes as they set up their own systems.

“Grow Your Own Groceries” chronicles what they learned along the way. I was particularly interested in their rainwater systems, intended to be their main water source, until persistent drought forced them to drill a well. Still, if you’ve got it, rainwater is best for growing plants, followed by pond water and well water, Marjory says.

On their journey to self-sufficiency, Marjory and Dave saw how important it is to share skills and knowledge. “I realized that community is absolutely vital to survival,” she said.

Not only can neighbors trade vegetables and labor, they can pool resources to buy in bulk. Also, if one is especially gifted at cultivating bees, another might make cheese or build wooden barrels. As Marjory sought ways to strengthen her local community, she found herself being a teacher, bringing people to the farm for hands-on lessons.

“The demand got so big, we couldn’t keep up,” Marjory said.

In 2009, Marjory’s video, “Grow Your Own Groceries,” became a way to show people everywhere how to grow food anywhere, with special emphasis on backyard gardening and small livestock rearing. Today, 300,000 copies are used worldwide – by homesteaders, survivalists, missionary organizations and universities.

“Diversity is key,” Marjory said, explaining that perennial plants should be mixed with annuals, wild edibles, livestock, wild game and insects (an excellent source of Omega 3 fatty acids). If one crop fails one year, another may flourish. Seeing a need for urban and suburban solutions, Marjory is now experimenting with aquaponics.

“We have got to shift and change and evolve,” she said.

Marjory loves the whole homesteading way of life. Her dream is for every family to enjoy the satisfaction and good health gained from eating food they grew themselves. The catalyzing statement for her organization is “Homegrown Food on Every Table.”

“In my journey, I’ve found that returning to a life where I produce most of my own basic needs has been the most fulfilling thing I’ve ever done,” Marjory said. “The inner strength that comes from eating deeply nutritious food that I’ve grown myself, the confidence from knowing I can provide for my family no matter what, and the joy of independence from tyrannical systems, are all so worth it.”

To learn more about Marjory Wildcraft and “Grow Your Own Groceries,” visit growyourowngroceries.org and our blog with more photos and information.

Photos courtesy of Marjory Wildcraft in her Texas garden.

How to Stock a Prepper Pantry