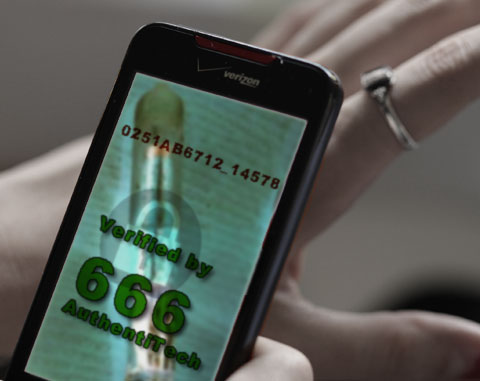 “And he causes all, the small and the great, and the rich and the poor, and the free men and the slaves, to be given a mark on their right hand or on their forehead, and he provides that no one will be able to buy or to sell, except the one who has the mark, either the name of the beast or the number of his name.…” -Revelation 13:16-17

Today, mandatory RFID microchips for humans are still a distant and creepy possible future, with a handful of tech-trendy volunteers trying to revolutionize use of the icon of the tracked and traced society.

Many see microchips becoming not only mandatory under an Orwellian super-surveillance state – but utterly indispensable to modern life, as dozens of hard to remember passwords, payments and transactions for online business and leisure become not just commonplace but overwhelming and pervasive. The chip might become too necessary not to take.

How will you keep track of all your online keys, and how will they know you are who you say you are?

It may someday soon become so essential to online, data-driven life – filled with authentications and location-based and secure user-specific applications – that few will resist taking the chip… despite the warnings in prophecy and by modern day privacy advocates.

A number of brave new technerds are chipping themselves to go boldly into the biometric future. And the trend is becoming more popular:

Worldwide some 2,000 people have been ‘chipped’ and their number is growing. Oudennarden expects their number to grow considerably next year, particularly among what he calls ‘technerds’.

Martijn Wismeijer, who has had two chips in his hand for a couple of weeks, says the pain was over after a couple of days. ‘You can still feel them, but you forget they are there,’ he said. He uses one chip as a savings account for bitcoins – which he says is the safest way to keep them. The chip on his other hand stores the passwords for 900 websites. ‘Many people use the same password for everything but I think that is a bad habit,’ he says.

The Dutch entrepreneur Martijn Wismeijer, who has been profiled by CBS News and other media outlets, has been dubbed “Mr. Bitcoin,” and is on the cutting edge of consumer orientied NFC, or near-field communication, which uses to microchips or wearable devices to communicate with mobile and tablet devices to unlock and initiate:

“Mr. Bitcoin” will never forget where he left his wallet. It’s implanted under his skin.

Wismeijer and his compatriots got tiny NFC chips injected into their hands. NFC, which stands for near-field communications, is the same type of technology built into the Apple Pay digital payment system and numerous Android devices.

“It is compatible with all NFC compliant devices such as mobile phones, tablets, etc. and can be used to launch URLs, share contact details, unlock phones, etc.” It says the chip “can also be used with several types of commercial readers to unlock doors, start cars, log into computers.”

Never mind that these chips can be easily hacked, and are vulnerable unless further steps are taken to secure the data. These technerds have cool haircuts, handlebar mustaches and techno beats.

Just watch the video Wismeijer posted of receiving his implant:

Maybe it is just a handful of ‘technerds’ right now, but the transition is happening faster than most of us realize.

Right now, “wearables” are quickly on their way to becoming consumer must-haves, and the latest Christmas gadget crazes: Google Glass has made its mark, now smart watches, bracelets and fitness monitors are coming to the fore under a variety of brand names. Many are mini-computers and all can share data with a wide range of digital systems.

Soon, wearables are supposed to integrate with clothing, shoes, etc. as well, as the Daily Mail reported: 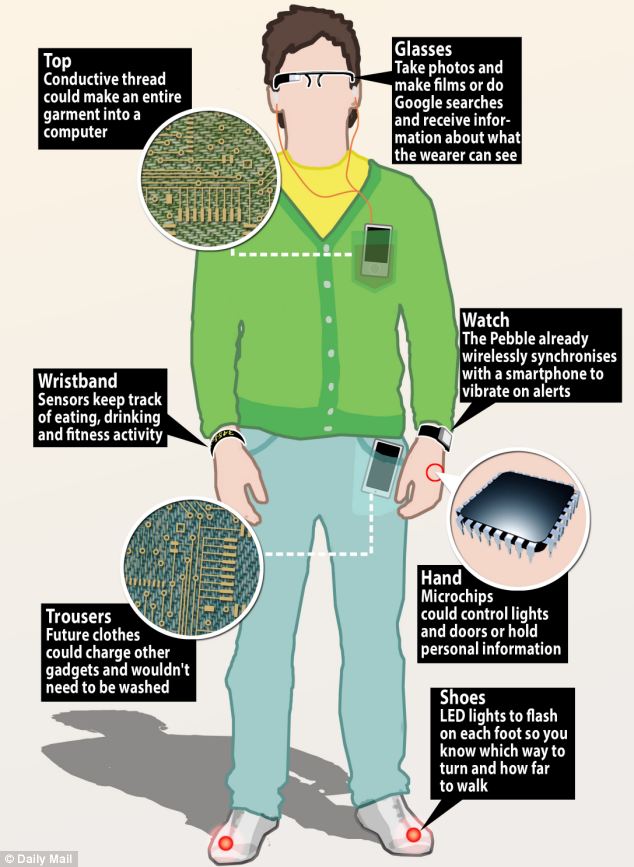 But it won’t be long before “wearables” become implantables…

Regina Dugan, the former director of DARPA is currently Google’s Vice President of Engineering, Advanced Technology and Projects and in charge of special projects for the Google-owned Motorola Mobility. In 2013, Dugan presented a vision for the near-future that is sure to make your skin crawl:

“We got to do a lot of epic shit when I was at DARPA,” Dugan said onstage at D11. But the stuff she is working on at Motorola is pretty cool (and totally creepy!) too:

• An electronic tattoo that can be used to authenticate a user instead of some flimsy password. It’s made by a company called MC10 that Motorola is partnering with, and Dugan is wearing it on her own arm.
• Another option in a similar vein: Vitamin authentication. Dugan shows a pill that can be ingested and then battery-powered with stomach acid to produce an 18-bit internal signal. After that, the swallower’s whole body becomes a password. 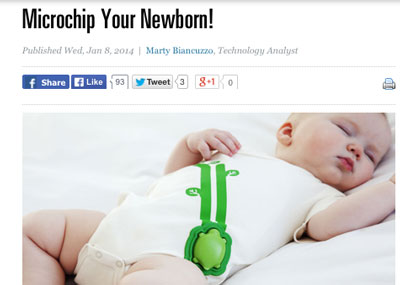 January 2014 saw the trade show roll out of the smart baby – where newborns can be outfitted with an RFID-embedded techno-onesie that monitors and tracks vital stats via Intel’s Edison micro-computer… and even predicts when babies will fall asleep, lulling parents into buying once again into the promise of technology:

When I chatted with Rest Devices, I was shown a demo baby, outfitted in a high-tech onesie called Mimo. Those green stripes and attached device you can see lying across the baby are fully equipped with sensors that monitor a baby’s breathing, temperature and activity level.

But that’s not all…

Mimo also has an algorithm that can work out when your baby is about to fall asleep. Valuable information for parents that allows them to optimize their sleep time, too!

As you can see, RFID microchips are not only ominous and foreboding, they are likely just the beginning of a future so technologically driven that humanity could be easily put in the backseat, dwarfed, diminished, disposed of and transcended.

Today it is trendy, new and surely useful. And they are much more likely to enter everyday life through the convenience of online life than through draconian, mandatory compliance with something like Obamacare, thought that could conceivably come to pass as well.

But, for tomorrow, the writing is on the wall, and you have been warned. Before the microchip becomes a ‘red line’ requirement with consequences for resisting, it will be a ‘don’t be left behind’ staple of consumer life that will be integrated with everyday life, perhaps with little notice.