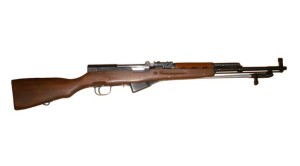 Yeah, they’re ugly. Yeah, they’re generally old. Yeah, they’re sometimes pretty beat up. But the fact is that the military surplus and law-enforcement trade-in market is a great place to source badass SHTF guns. (Relatively) cheap, reliable, and useful, military and LE guns are available in huge quantity, and they’re not super-sexy to most people, but they’re perfect for stow-away guns for you and me. How does that work? Well, let’s look into it. 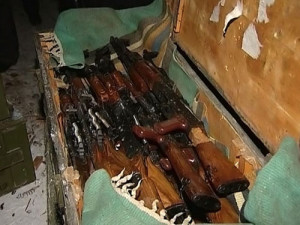 When military gear gets a little long in the tooth, or obsolete, or just basically replaced with new gear, most militaries store their hundreds of thousands of surplus guns, just to hedge their bets a little in case the new gear doesn’t work, or they need to supply other secondary armies, or maybe send them to Mexico to try to track drug cartels. They get covered in a preserving grease (usually a form of Cosmoline) and stowed away for a rainy day. Well, when that rainy day never comes, and the supply officer realizes they have crates and crates of 50-year-old Korean-war era rifles kicking around, they will often sell them off in huge auctions or to the highest bidder for huge volume prices, usually to firearms importers such as Century International Arms or Classic Firearms. These importers mark them with an import stamp (required by law) and then sell them first come, first serve to the public.

Police departments will also likewise trade in their old, holster-worn guns for a discount against new, updated guns. When they do, those ex-PD guns get dumped on the market for cheap.

For instance, this Gen-3 Glock 22 is a PD trade-in, available through Kiesler Police Supply. It can be had for $359, and like PD trade-in cars, they are generally very well maintained, as police departments want their gear running when they need it. Also, they want their guns to be supported by the factory warranty, so they are subjected to by-the-letter maintenance schedules. If the manufacturer says to replace the recoil spring every 5,000 rounds, by God, it’s getting replaced. The finish might be worn, but the internal parts are up to spec and in good working order. As a bonus, to get a tactical edge, most PD guns will have night sights, and light-mounting rails. Sometimes they’ll come with holsters and mag pouches too, making a complete deal hard to refuse. Ex-law enforcement AR-15s and Remington 870s or Mossberg 500s are easy to find, too. They might be a tad worn, but they’ll work great and give you fantastic service, making dredging the surplus market a great way to get top-end gear for low-ball prices.

What are great guns to look for? The SKS pictured at the top of this post is a mainstay battle carbine of Russian, Chinese, Korean, Vietnamese, and many other forces, from the Korean war era well through the Vietnam war era. They are ridiculously simple to use, very easy to maintain, and the aftermarket provides you with all the latest and greatest to make your blah ’50s-era SKS into an accurate, ergonomic, effective black rifle. The 7.62x39mm ammo is dirt cheap and available in huge quantity over the surplus market, and it is roughly as powerful as a .30-30. Average price? Expect to walk out the door with one in the $300 range, depending on condition. Classic Firearms lists Chinese milled-reciever SKSs from $279-$319, with a suggested retail of $399. A 1000-round case of ammo goes for $249 from the same retailer. For less than the price of a new low-end AR-15, you can have a 100% reliable battle rifle with 1000 rounds of ammo, ready to stow away. Ain’t nothing wrong with that.

Classic Firearms also lists Russian 91/30 Mosin Nagants for dirt prices: A nice one with a tough-as-hell laminated stock only fetches $159. Buy a few with your buddies and the price drops for bulk buys, too. These rifles are the essence of tough-as-hell Russian battle gear, and will always work. As a bonus, you can probably use them as a jack handle or a tent pole and the rifles will be fine with it. The 7.62×54 ammo is roughly as powerful as a .30-06 round, and an 880-round case will go about $175. The still-in-cosmoline feature is nice for long-term storage.

For handguns, the police market is the way to go. revolvers, semi-autos, they’re all there. And PDs generally get the best gear they can afford for their boys in blue, so you can be sure you’re getting top-notch stuff. The aforementioned Glock is a great deal, but what if you’re not a Glock guy? How about a Sig-Sauer P229? (Man I LOVE Sigs!)

Kiesler lists this P229 in .357 Sig (not the easiest caliber to obtain, but can be converted to .40 for a song) with night sights and the DAK trigger system (a light, smooth double-action-only pull) for $469. Folks, that’s a hell of a lot of gun for under $500. This pistol new would retail for well over $800.

The milsurp/LE trade-in market is a great place to get good gear cheap. A lot of gun show tables will feature this stuff, but your local FFL dealer will be able to order this stuff for you with little hassle. Downsides? A PD may only have 10 officers, so if that slick trade-in P229 lights your fire, you’d better jump on it if you see it on an ad, because those 10 pistols will go fast. But, if you’re hot to trot for a Glock, say, they will be much more common than a Sig in the trade-in market, so you’ll just have to wait a bit and another will come along. As for Military Surplus, well, other preppers like you and me are jumping on this bandwagon, and hoarding them. Also, military collectors are starting to collect these guns, especially the rare variants, and that’s starting to drive the price up, little by little. So now is the best time to grab a few of those bucks you’ve been saving and obtain a good, old, military gun that will serve you well…even after 20 years in a PVC tube in the ground. Just sayin’.

Any of you guys seen good deals? Do you have any milsurp/LE guns? How have they worked for you?

Selecting Guns For Your Bug Out Bag