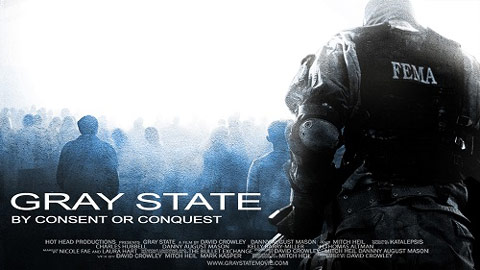 I woke up this morning to the very disturbing and saddening news that a Liberty Movement colleague, David Crowley, had been found dead in his Minnesota home along with his wife and 5-year-old daughter. Mainstream media outlets, without any apparent evidence or backing from local police and coroner reports, have immediately injected the notion of “murder-suicide”, suggesting that Crowley was somehow unstable, and that he had murdered his own family and then took his own life. MSM articles showcase Crowley in tactical attire and holding firearms (most of which were props for his upcoming film ‘Gray State’, which depicts the collapse of America and the rise of a totalitarian society very close to what we are actually facing today). Ostensibly these photos, along with the fact that Crowley owned “many guns”, are being used to convince the public that the murder-suicide theory is plausible. The police, on the other hand, are treating the deaths as “suspicious”.

I met David Crowley myself in Tampa, Florida during the Paulfest rally and RNC in 2012. We had bunked in the same house with multiple other liberty activists and movement voices. We hung out around the pool, drank beer, discussed the growing troubles of the day, and joked about the absurdity of it all to make ourselves feel better. From what I remember of Crowley, he was a level headed and dedicated military veteran, with absolutely NO signs of mental instability, anger, or depression. I happen to be very familiar with the signals of post traumatic stress disorder, and Crowley had none of them. He knew his path in life, his film concept was gaining momentum and funding, and his mission was clear. None of the psychologically debilitating elements of bewilderment, lack of focus, and lack of self-value common to suicide victims were present in Crowley’s attitude or life.

Like everyone else, I am not privy to the physical evidence available to police in the case of Crowley’s death and the death of his family. I can only speak on what I know of the man personally, as well as my intuition on the situation. My intuition tells me that there is NOT A CHANCE IN HELL that Crowley had a breakdown, let alone murdered his wife and daughter. Nothing in the mainstream narrative adds up. Which leaves me only one other conclusion: David Crowley and his family were murdered.

We can only theorize on the ‘Who’ behind such a crime; I would suggest that people ask themselves who it is that benefits most from the death of David Crowley, or any liberty movement activist, for that matter. Who, exactly, benefits from the possible fear such a vicious death might cause. Who benefits by inserting into the public consciousness the notion that liberty activists, especially activist veterans, are all “time bombs” just waiting to snap?

Many in the alternative economic field are well aware of the strange trend of dozens of mid-to-high level banking officials and people tied to them dying off over the course of the past year.

Most of these strange fatalities have been attributed to “suicide” without any substantial investigation. And in some cases, details of the deaths have been hidden from the public.

My concern is that such an unfortunate and unexplainable suicide frenzy may strike prominent figures in the Liberty Movement as well. So, to head off such a scenario before it begins, I am writing the following pledge to secure myself from “suicided” status, and I hope that all other liberty movement activists and prominent personalities will make similar statements in order to provide at least some insurance and public reference against a possibly insidious purge.

My Pledge, if it turns out I happen to be important enough to kill…

I, Brandon Smith, founder of Alt-Market.com, will NEVER bring deliberate harm to myself or other innocent people. I will NEVER commit suicide, nor will I ever hurt other people, including family, friends, or colleagues. I will NEVER use a weapon against another human being unless in self defense. I also will NEVER disappear from public view of my own volition, nor will I ever abruptly quit my work within the liberty movement. I am dedicated to the cause of freedom, I am proud of the path my life has taken, I am of excellent health, and am sound of mind (though such a thing may be treated as “subjective” by many).

I will NEVER jump from a bridge, jump from a tall building, hang myself with my underwear in a case of auto-erotic asphyxiation (I’m not into that), drown myself in a lake, or drive my car into a tree after packing it with explosives. I have no drug addictions and NEVER take psychotropic medications. And to be clear, I will NEVER fly in a prop airplane, so it is impossible for me to die in a prop-plane crash. I also will NEVER pull a firearm on a police officer or federal agent unless they arrive without a warrant and exhibit clear intent to harm me or those I care about.

If I am found dead, regardless of the supposed circumstances or motives given by the mainstream press or state officials, IT WAS MURDER, not suicide. If I go missing, it is because of foul play, not because I have quit the movement, or gone off to Alaska to commune with the damn trees. Character attacks will not deter me from my work, nor cause me to walk away from my activism.

If I or any other liberty movement activist end up dead or missing under strange circumstances in the near future, I highly recommend that others in the movement consider this a serious threat and go “operational” to secure themselves and their loved ones.

I have no fear of covert programs against the movement or myself. I will continue to pursue my work, and all possible dangers are ultimately irrelevant. It is my hope that other activists will adopt the same attitude and not be dismayed, no matter what we witness in the days to come.

All of this might sound a bit “over the edge” to some people. Frankly, I couldn’t care less. These are the times we live in, whether one accepts it or not.

One lesson from the Crowley tragedy is the lesson of community. Crowley and his family had apparently been dead for around a month before anyone decided to check on them. Their neighbors barely knew them.

Where were their friends? Where were their relatives? Neighbors heard no gunshots? Why was there no community of people around them to question their disappearance? ALL liberty movement activists should be building community and organizing in groups which meet regularly, and they should be doing this NOW. This organization might be in the form of a neighborhood watch, a weekly prepper group, an Oath Keeper CPT group, etc. We cannot be isolated from each other any longer.

This pledge is a precaution, not a shield against violence aimed at us. Preparation must continue, for only when organized and prepared will we find any kind of legitimate security