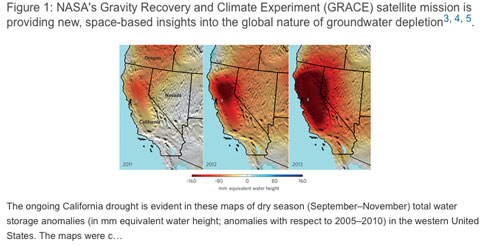 And with California as the United States’ most valuable agricultural state, and thus key to America’s food supply (and much of the world’s as well) that could mean drastic consequences for food commodity prices and potential shortages.

The groundwater at some of the world’s largest aquifers — in the U.S. High Plains, California’s Central Valley, China, India, and elsewhere — is being pumped out “at far greater rates than it can be naturally replenished.”

NASA’s sattelite map shows the loss of weight height just in the past three years:

“California’s Sacramento and San Joaquin river basins have lost roughly 15 km3 of total water per year since 2011 — more water than all 38 million Californians use for domestic and municipal supplies annually — over half of which is due to groundwater pumping in the Central Valley.”

Yes, of course, California is a desert. So, that isn’t helping things. But it was reformed into a thriving economy by controversial and historically corrupt irrigation scheme, and is now vital to U.S. food security.

The result of these dangerous conditions is, not surprisingly, higher commodity prices – including food and water – creating higher profits for the companies that provide these services. Privatized water could drive prices even higher.

There are storm clouds gathering, so to speak, but they aren’t bringing rain.

In July, California’s state government economic report was already warning of losses in the billions for farmers feeling the weight of drought conditions, though it claimed the national food system would be little impacted.

However, time has made that claim ring hollow. In August, Bloomberg reported on the “global reverberations” occurring because of the drought in California:

“It’s a really big deal,” Sumner said. “Some crops simply grow better here than anyplace else, and our location gives us access to markets you don’t have elsewhere.”

The success of California agriculture was built in large part on advances in irrigation that allowed the state to expand beyond wheat, which flourishes in dry climates. It’s now the U.S.’s top dairy producer and grows half the country’s fruits, vegetables and nuts.

“Water has allowed us to grow more valuable crops,” Sumner said. “Now, we have fruits and vegetables and North Dakota grows our wheat. Without irrigation, we’d be North Dakota.”

“There will be some definite changes, probably structural changes, to the entire industry” as drought persists, said American Farm Bureau Federation President Bob Stallman. “Farmers have made changes. They’ve shifted. This is what farmers do.”

Locals in California are now reporting everything from reduced availability of produce, to higher prices in restaurants and reduced hours and activity at farmer’s markets and local stores.

Most farmers have cutback on what they are growing. In many cases, that means chopping down trees, orchards and not planting as many fields:

“I was just talking to a farmer today who grows olives and almonds. Expect prices of almonds to skyrocket because they’re cutting the trees down because they don’t have enough water to keep them alive,” said Helstrom.

California is by no means the only place facing life threatening shortages. There are similarly alarming trends having all across the globe, particularly in arid and semi-arid places.

Texas ranchers and farmers have been dealing with returning dust bowl conditions in the panhandle and surrounding regions, with very difficult drought conditions and conflicting urban competition for water which strain supply.

The 20 million people in Brazil’s Sao Paulo are facing a stark 5 percent reserves in their municipal water reservoir, with Brazil’s Public Ministry recently acknowledging that the Sao Paulo water supply might last only another 100 days.

Further shortages in rain could easily be the makings of a disaster that could deprive its residents of the basic necessities of life, particularly the swelling poor populations. Already, rationing has crept in, and water used for cooking, bathing and cleaning has been restricted.

“Suffering from its worst drought in over 84 years, the city of Sao Paulo is in the midst of a crisis. For as of this weekend the city’s primary reservoir — the Cantareira — had dropped to just 5 percent capacity putting millions at risk of losing access to water.”

“The fall prompted the city’s governor — Geraldo Alckmin — to again ask for permission to draw emergency water supplies from below flood gates to alleviate catastrophic losses from the Cantareira and ensure water supplies to the region’s 20 million residents. The move would tap a river system that feeds two other states also facing water shortages — Rio de Janeiro and Minas Gerais. But the draw is only a temporary stop gap and, without rain, the Cantareira will continue to fall — bottoming out sometime this November.”

Large swaths of the immense Amazon region are enduring drought, while various hotspots across South America are also drastically below average precipitation levels. 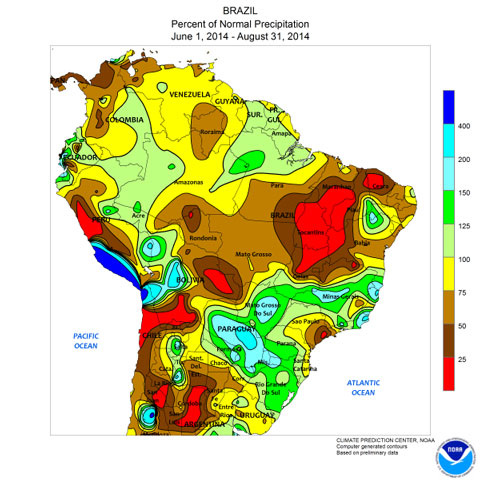 NASA has also tracked serious aquifer depletion in “the North China Plain, Australia’s Canning Basin, the Northwest Sahara Aquifer System, the Guarani Aquifer in South America … and the aquifers beneath northwestern India and the Middle East,” as Think Progress notes. Parts of Northern China are also seeing their worst drought in 60 years. 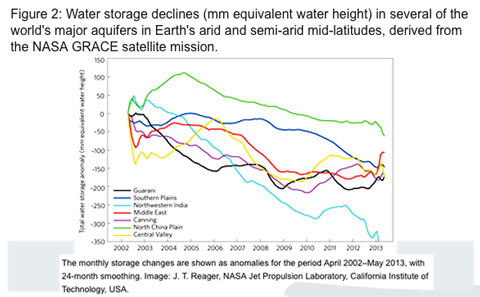