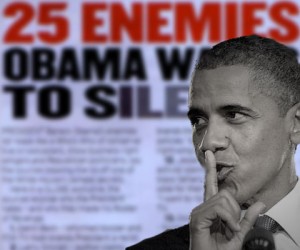 This piece of investigative journalism was conducted by Michael Snyder and original published at his End of the American Dream blog.

Someone is attempting to harass and intimidate media personalities that are very critical of Barack Obama and his administration. Whoever is doing this has extremely advanced technical capabilities.

As you will see below, there is very strong anecdotal evidence that federal agents are involved. But these agents would never commit such actions on their own. It seems clear that they are getting orders from someone above them.

Of course Barack Obama (or any of his top lieutenants) would never come out and publicly admit that Gestapo tactics are being used against media personalities on Obama’s rumored “enemies list”, but that appears to be precisely what is happening. Hopefully by shining a light on these activities it will cause those that are doing these things to cease and desist. And it is very important to point out that what is being done to these media personalities is illegal. Anyone that is involved in harassing media personalities because of what they are saying is violating federal law and is in danger of going to prison for a very, very long time.

Later in this article, I want to share with you the shocking harassment and intimidation that Rick Wiles of TruNews has been enduring lately. But first, let’s review what has happened to former CBS News reporter Sharyl Attkisson. She was an award-winning journalist for more than thirty years, but that didn’t stop the Obama administration from systematically harassing her. In her new book entitled Stonewalled: My Fight for Truth Against the Forces of Obstruction, Intimidation, and Harassment in Obama’s Washington, she makes some extremely startling claims. She believes that the harassment and intimidation that she experienced were the direct result of her determination to get to the truth about Benghazi, Fast and Furious, the green energy scandals and Obamacare. The following are some of the main points that she has been sharing with the media in recent weeks…

-While she was working at CBS News her computers were hacked by the government, her keystrokes were monitored and potentially incriminating classified material was planted on her hard drive.

-She says that her computers would “turn themselves on in the night, make strange noises, then shut themselves down”.

-An exhaustive examination of one of her computers found that it had been hacked by “a sophisticated entity that used commercial, nonattributable spyware that’s proprietary to a government agency: either the CIA, FBI, the Defense Intelligence Agency or the National Security Agency.”

-The expert that examined her system told her that three classified documents were “buried deep in your operating system. In a place that, unless you’re a some kind of computer whiz specialist, you wouldn’t even know exists.”

-She claims that the feds even had the ability to remotely activate Skype on her computer and listen to any private conversations that she was having: “It’s pretty chilling when you consider the extent of the abilities they had, according to the forensics reports, to monitor my every keystroke, to activate Skype by getting the password to my account, and listen through Skype on to audio if I was talking in the room or talking on the phone. Being able to exfiltrate files using Skype, downloading and refreshing these surveillance methods periodically using something called a BGAN satellite terminal, using WiFi when I was at a Ritz Carlton at one point.”

-She has been told that Barack Obama has an “enemies list” similar to what Richard Nixon once had.

-She claims that important stories about Obama administration scandals such as Benghazi and Fast and Furious were routinely blocked by gatekeepers while she was at CBS News.

-She says that reporters have essentially been turned into “casting agents” and are told to find people that will express a particular point of view.

So who ultimately ordered federal agents to go after Sharyl Attkisson?

If it was Barack Obama, that is grounds for immediate impeachment.

If it was someone else in his administration, that individual is in danger of going to prison for a very, very long time.

Sadly, Attkisson is far from alone. A whole host of other media personalities that have also been very critical of Barack Obama have been targeted. As we have seen, sometimes the IRS is the vehicle used to go after them. Other times, more direct action is taken.

For example, there have been very few media personalities that have been more critical of Barack Obama than Rick Wiles of TruNews. And what he has been going through in recent months is more than just a little bit alarming.

How would you feel if strange vehicles sat outside your home and the men sitting inside the vehicles stared at you for hours? Well, that is exactly what is happening at TruNews headquarters. The following is an excerpt from what Rick shared with his listeners just the other day…

Friday was an unusually busy day. A total of four vehicles parked in the same spot throughout the day. The moment one vehicle departed it was immediately replaced by another vehicle. If I were a paranoid conspiracy theorist, I’d think we were under surveillance! What a crazy idea. This is America. That kind of stuff doesn’t happen here, right?

Friday morning started out with the first car. Soon after, another vehicle joined. Both vehicles sat next to each other for several hours. I can turn around in my office and look out the window and see them. I walked outside and took photos of the vehicles. I wanted them to see me watching them.

Shortly after taking the photographs, both vehicles drove away. Immediately, they were replaced by a third vehicle.

I walked outside and took a photo of the third vehicle too. He started his engine and very slowly drove toward me. He had his window down and stared at me as he slowly drove by the office. I waved at him to let him know I was aware of his presence and wasn’t intimidated.

But even more troubling have been the repeated break-ins at night. Nothing has ever been stolen during these break-ins, and whoever was conducting them had the ability to turn off the security cameras…

The good news is that the mysterious breaking and entering intrusions into our offices appear to have stopped. For months there were clear signs that somebody was entering the building. We found ceiling tiles moved, ceiling attic doors hanging open, and some doors unlocked. Nothing was ever stolen or moved.

I changed the locks and security access codes multiple times throughout the summer. They continued to enter as though they walked through the walls. Furthermore, our security cameras stopped recording at certain hours during the night. Obviously, the intruders were people with advanced skills and technologies to enable them to evade detection.

Most disturbing of all is what has been going on at Rick’s private residence.

Someone has been breaking into his home every day and turning on music with the volume dialed up to the highest level. Clearly, someone is trying to mess with his head…

An unusual thing has happened every night this week. When I arrive home and get out of my vehicle, I can hear loud music in my house. Each night I have discovered that our in-house stereo system was turned on with the volume at the maximum level. The music was so loud each night I could hear it when I got out of my vehicle in the driveway. My neighbors must think I’m losing my hearing….or my mind!

I have gone to the Indian River County Sheriff’s Office twice to tell deputies that I’m under surveillance.

Next week I will request a private meeting with Indian River County Sheriff Deryl Loar. I will tell him that I am being stalked. I am under surveillance. I believe that my life is in danger.

This is one of the most chilling things that I have read in a very long time.

To do this kind of thing, you have to be very twisted.

And to order that this kind of thing be done, you have to be even more twisted.

This is the kind of thing that the Nazis did.

Sadly, the truth is that we are becoming more like Nazi Germany with each passing day.

What in the world is happening to this country?

Officials in the federal government cannot harass and intimidate media personalities just because they do not like what they are saying.

By doing so, they are breaking the law. And if the full truth about this ever came out, it could prove to be one of the greatest scandals in American political history.

So do you know of any other media personalities that are being subjected to this kind of harassment? Please feel free to add to the discussion by posting a comment below…

Michael T. Snyder is a graduate of the University of Florida law school and he worked as an attorney in the heart of Washington D.C. for a number of years. Today, Michael is best known for his work as the publisher of The Economic Collapse Blog (http://theeconomiccollapseblog.com/). Michael and his wife, Meranda, believe that a great awakening is coming and they are working hard to help bring renewal to America.

I would love to hear feedback from all of you about the book. If you would like to tell me what you thought about the novel, please email me at TheEconomicCollapseBlog @ hotmail.com

You can find the paperback version of the book right here, and the Kindle version right here. Thank you for supporting my work, and I hope that you really enjoy the story that I have created.