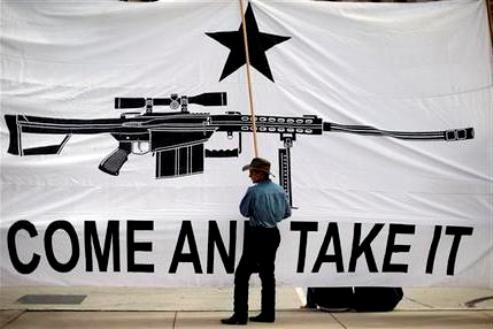 If nothing else can be said about President Obama, he has adamantly stuck to one key promise – the one he made to the Brady Center to pursue gun control ‘under the radar.‘

The AR-15 is America’s most popular sporting rifle, and it has been falsely mischaracterized as an “automatic” firearm and an “assault” weapon. It has been demonized as a monstrosity via the Sandy Hook shootings. Bans on it and other so-called “assault weapons” have been attempted from every possible angle.

And now that those measures have failed to accomplish total gun control, the Obama Administration, hungry to undermine the 2nd Amendment and restrict gun ownership, is using backdoor regulations through the BATFE to ban the sale, import and manufacture of the most affordable ammunition for the AR-15. Melissa Melton writes:

“The Obama administration was unable to ban America’s most popular sporting rifle through the legislative process, so now it’s trying to ban commonly owned and used ammunition through regulation.”

Chris Cox, executive director of the NRA’s Institute for Legislative Action, has hit the nail on the head.

Following the Sandy Hook shooting, the Obama administration tried to ban several kinds of firearms, including the AR-15.

Now it seems that he may have actually found a way to do it, albeit slowly. He isn’t going to outright ban the gun itself; the Bureau of Alcohol, Tobacco, Firearms and Explosives (BATFE) is just going to ban the most commonly sold bullets for the gun instead.

This is being sold on the dubious pretext that it is “armor piercing” and a threat to law enforcement, while the AR-15 its common 5.56 mm ammo (.223 is also used) are not even remotely the most deadly weapons in the hands of citizen gun owners. Yet the bans and restrictions are centered around the perception that is a ‘military weapon best used in war, not on the streets of America…’

Even the New York Times conceded this is the wrong focus for gun control advocates:

It turns out that big, scary military rifles don’t kill the vast majority of the 11,000 Americans murdered with guns each year. Little handguns do.

The continuing focus on assault weapons stems from the media’s obsessive focus on mass shootings, which disproportionately involve weapons like the AR-15, a civilian version of the military M16 rifle. This, in turn, obscures some grim truths about who is really dying from gunshots.

Annually, 5,000 to 6,000 black men are murdered with guns. Black men amount to only 6 percent of the population. Yet of the 30 Americans on average shot to death each day, half are black males.

Moreover, justifying 5.56 mm ammo for a ban has proven to be a ridiculous game of semantics, with the technical rationale a paper-thin see-through farce. Forbes writes:

Now, to be as nitpicky as the law, the M855 ball ammunition the ATF wants to ban as “armor piercing” doesn’t have a core made of the metals listed in what legally makes a bullet “armor piercing.” The M855 actually has a lead core with a steel tip. Also, the M855 is traditionally a rifle cartridge and the ban only covers handgun ammunition. The DOJ argues this doesn’t stop them because the law stipulates they can ban a bullet that “may be used in a handgun.” And, after all, any cartridge may be used in a handgun.

The ban isn’t absolute, but it puts serious pressure on gun owners and definitely infringes on the right to keep and bear arms. Melton writes:

So you can still legally own it if you already have it… but no one can import it, sell it, or even produce it.

That’s of course if you can find and it and buy it before the ban takes effect. Prices have already been soaring on this ammo, and ammo in general, given the unrelenting assault on the 2nd Amendment by Obama and his allies, including former New York Mayor Michael Bloomberg, who ironically was caught on tape admitted that his gun ban really targets racial minorities in inner cities. That focus, of course, won’t spare the rest of America’s millions of law abiding gun owners.

It is clear that Obama’s “lame duck” years aren’t toothless soft power, but an opportunity for stealth attacks. Defied by Congress and much of the public, Obama has been emboldened in his actions knowing that there is little that can or will hold him accountable.

We have a man occupying the White House that seems absolutely determined to stretch the limits of presidential power as far as they can possibly go.

And at this point he has become so arrogant that he doesn’t even care if Congress believes that what he is doing is legal. Just consider what he said during one recent speech…

“So in the short term, if Mr. McConnell, the leader of the Senate, and the Speaker of the House, John Boehner, want to have a vote on whether what I’m doing is legal or not, they can have that vote. I will veto that vote, because I’m absolutely confident that what we’re doing is the right thing to do.” (source)

A president that is willing to use executive actions, executive orders and his trusty ‘pen and phone’ to make unilateral legislation is even more dangerous in making quiet actions little covered by the media and mostly noticed only by niche groups of citizens.

Author Michael Snyder dubbed it a ‘War on Preppers,’ targeting the 1% who have the foresight to stock up on ammo and supplies in order to remain prepared for all contingencies, including being appropriately armed for self-defense:

Previously, the Obama administration attempted unsuccessfully to ban the AR-15. That didn’t work, so now Obama is going after the ammunition. This is yet another example of the war on preppers that is going on all over the nation. Whether you are a gun owner or not, this assault on our constitutional rights should disturb you greatly.

Banning the right to keep and bear arms has been on the federal agenda for years now. It would appear that since the government knows it can’t just outright ban the Second Amendment, they’ll just inch it up incrementally and undermine it into oblivion.

The lesson here remains eternal vigilance, and a reminder never to turn your back on a “lame duck” president in the age of executive actions and rule by agency.