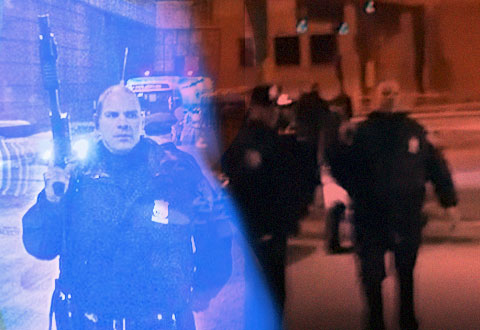 As the post-Ferguson world continues forward dividing people against the police, escalations are occurring on all sides.

In an incident recorded from February 27, a Port Authority officer in New York was caught on camera using chambering a round in a shotgun to intimidate a group of protesters attempting to block off an intersecting during a demonstration against police abuse.

A dozen or two protesters were on scene peaceably shutting carrying signs and banners, one with the meme “Black Lives Matter,” while singing at a street intersection, before the officer approach with the weapon in hand.

“Whoa, there is an officer coming out with a massive gun,” the cameraman in the video is heard stating. “The guy has a massive gun here.”

The officer, identified as M. Fusco, directs the man with the camera to ‘go over there’ before approaching the other protesters with a tactical shotgun held straight up into the air for effect.

While directing protesters to the other side, Fusco is heard stating “Guys, this is the Lincoln Tunnel. This isn’t about the protest, I’m worried about terrorists.”

Recently, the NYPD pledged to stop policing protests with machine guns. But the Port Authority has decided that tactical shotguns are still a must to keep peaceful demonstrators in line. Not only that, but Friday night, as protesters converged on Penn Station, armed only with banners and pictures as they recited the names of people who have been killed at the hands of the NYPD, one cop decided to pull a shotgun on them.

The protesters were non-violent throughout the demonstration, but the officer taunted them, saying “are you scared? Are you scared?” as he brandished the tactical shotgun, trying to intimidate them.

[…] Activist Patrick Waldo [recounted] “the officer with the gun was one of the first that I noticed. He actually had [finger]-on-the trigger, shotgun up in the air. We were all like, whoa whoa whoa, take it easy!”

Here’s two of the videos showing the incident from different angles: