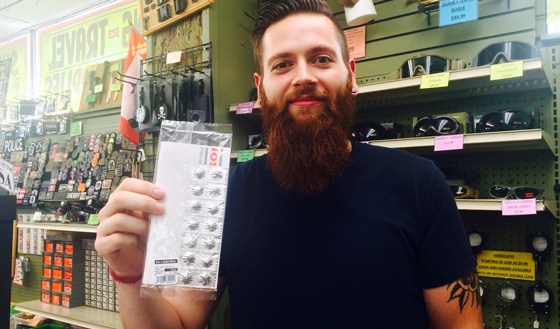 As is often the case, most people wait until the last minute to prepare for the worst.

As reported by CBS Detroit, one Army Surplus store owner reports that preparedness equipment is flying off the shelves:

And there’s been a substantial increase in the sale of a particular item they don’t sell much of — a so-called radiation antidote called potassium iodide.

“It actually stops your thyroid from absorbing any radiation. So, it fills your thyroid with iodine, which it normally does anyways,” said Orr.

Another popular request: gas masks. But most people looking for those will be out of luck.

“Gas masks are a big thing too, but we only sell them as novelty,” said Orr.

Ed Thomas, a spokesperson for TopTierGearUSA.com, which distributes high-end protective equipment for Nuclear, Biological and Chemical emergencies, says that their web site has seen a 1200% spike in orders in the last week.

We’re barely keeping up with the inflow of orders and our staff is working double shifts just to get everything shipped. People are concerned with North Korea, World War III and what President Trump might do.

I’ve never seen it at these levels.

Everything… Anti radiation pills, gas masks, body suits and respiratory filters… people are trying to get their hands on these critical supplies in case this really happens.

Our biggest concern is that our manufacturers won’t be able to keep up with demand.

And it’s not just preparedness supplies. As Zero Hedge reports, bunker sales in California have skyrocket:

While a global nuclear confrontation is generally viewed as a bad thing, for Ron Hubbard, President of Atlas Survival Shelters in Los Angeles, it has resulted in an economic windfall.  Here’s more from The Sacramento Bee:

As we’ve reported previously, the situation has gotten so serious that the island nation of Guam, recently threatened for annihilation by North Korea, has issued a nuclear emergency guide warning residents to not look at the flash or fireball following a nuclear detonation.

President Trump announced Friday that the U.S. military is “locked and loaded,” ready to respond to North Korean aggression.

With panic buying taking hold, it’s only a matter of time before prices for items like gas masks anti-radiation pills go through the roof. Following the Fukushima nuclear disaster in Japan, panicked U.S. West coast residents pushed prices for a single package to $200 on auction sites. Under normal circumstances, a package of the FDA approved pills sells for about $20.