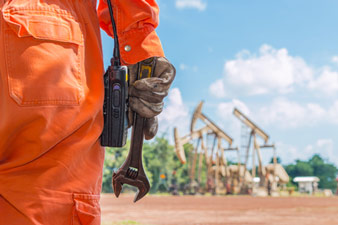 Low oil prices are good for America according to President Obama. In fact, he has personally taken credit for the savings you’re experiencing.

In a normal economy lower prices at the pump would certainly help to spur growth in other sectors. The problem, of course, is that the new normal means that oil companies and banks leveraged heavily as prices rose. They assumed, like real estate speculators ahead of the 2008 crash, that the price of oil could only go in one direction. As we’ve seen in recent months, however, oil speculation is exactly that and despite our dependency on black gold the energy industry is not immune from massive price swings.

The consequences will be two-fold and the cracks are already starting to appear.

First, according to a new report from Zero Hedge, over 100,000 jobs have been lost globally as a result of lower oil prices and more are pink slips are coming:

The bloodletting among the oil majors and their vast web of ancillary services has of course extended to the United States – which appears to be taking far more casualties than Saudi Arabia in the battle for marketshare. In January oilfield services giant Baker Hughes said it will lay off 7,000 employees, about 11 percent of its workforce; that number was rivalled only by its competitor, Schlumberger, which let go 9,000 workers. Shell, Apache, Pemex and Halliburton are among major oil companies to issue recent pink slips to the growing army of unemployed oil workers. In the U.S., the worst pain is, not shockingly, expected to be felt in Houston. Assuming a one-third reduction in oil company capital expenditures this year and 5 percent in 2016, the hydrocarbon capital of the world could lose 75,000 jobs, in a city that has added 100,000 new positions every year since 2011, said a professor at the University of Houston.

The oil jobs nightmare is in fact spreading like a cancer. According to Swift Worldwide Resources, “the number of energy jobs cut globally has climbed well above 100,000 as once-bustling oil hubs in Scotland, Australia and Brazil, among other countries, empty out,”Bloomberg reported recently.

Keeping in mind that the job growth seen in America since the 2009 recession came primarily from the oil and gas industry, the fact that tens of thousands of high paying jobs are being eliminated does not bode well for the economy.

The American economy typically benefits from lower oil prices as consumers keep more change in their pockets when visiting the gas pump. But these days those paltry savings don’t go very far considering that prices for food are rising and health care costs are through the roof.

But job losses are only part of the story.

Earlier this year we warned that the rapid drop in prices could cause the most destructive economic situation since the Great Depression, an argument explained in detail by Michael Snyder at The Economic Collapse Blog:

The big Wall Street banks did not expect plunging home prices to cause a mortgage-backed securities implosion back in 2008, and their models did not anticipate a decline in the price of oil by more than 40 dollars in less than six months this time either. If the price of oil stays at this level or goes down even more, someone out there is going to have to absorb some absolutely massive losses.

Should the price of oil not rise in coming months it could well be the trigger for the next big collapse of the economy and stock markets.

As we saw in 2008/2009, such a collapse could very quickly spiral out of control and create a negative feedback loop with more job losses, panic in credit markets, significant drops in real estate, and more emergency measures from the government.

Even jobs that many consider to be recession- or depression-proof are at risk. That’s why unemployment preparedness ahead of a personal disaster is absolutely necessary in the current economic climate.

Job loss is one of those personal emergencies that can strike without warning. Those who have been affected by unemployment know all too well of the stress involved in this “personal economic collapse”. That said, steps can be taken beforehand to buffer and prepare your household for this unexpected and unwelcoming disaster.

Via: Unemployment Prepping: What You Can Do Beforehand

Even if oil does recover we’re still in a heap of trouble from an economic, fiscal and monetary standpoint. Start making preparations today, because once disaster strikes it’ll be too late.