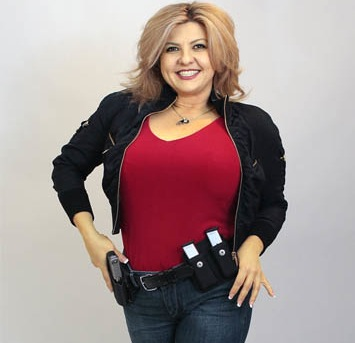 Second Amendment opponents are in an uproar after Nevada Assemblywoman Michele Fiore proposed a radical new concept to help curb the rise in rapes on college campuses.

Her off-the-wall idea, which is as old as the United States itself, is that women on college campuses be allowed to carry firearms.

If these young, hot little girls on campus have a firearm, I wonder how many men will want to assault them.

The sexual assaults that are occurring would go down once these sexual predators get a bullet in their head. As you might expect, left-leaning anti-gun groups immediately jumped on the comments, claiming that Fiore is exploiting one of the country’s hottest issues.

Andy Pelosi (no relation to California democrat and staunch anti-gunnner Nancy Pelosi) heads the Campaign to Keeps Guns Off Campus. “The gun lobby has seized on this tactic, this subject of sexual assault,” he said in response to Fiore’s proposal.

But is it really a political tactic to suggest that adults attending college classes in America should be able to defend themselves if they are confronted by a sexual predator?

Or do Pelosi and others who refuse to even consider this possibility assume that all potential predators will abide by campus guidelines that require a woman’s consent before any sexual contact?

The overwhelming majority of college administrators and faculty members oppose guns on college campuses according to the New York Times, but several student organizations pushing for concealed-carry have cropped up in recent years:

Many students who support current legislation have joined the lobbying group Students for Concealed Carry. Crayle Vanest, an Indiana University senior who recently became the first woman on the group’s national board, said she should be able to carry her licensed .38-caliber Bersa Thunder pistol on campus, where she said she had walked unarmed after her late-night shifts at a library food court.

“Universities are under a ton of investigation for how they handle sexual assaults — that shows how safe campus maybe isn’t,” said Ms. Vanest, who is lobbying Indiana lawmakers.

“Our female membership has increased massively. People who weren’t listening before are listening now.”

Women are starting to realize that no campaign poster, web site or campus pledge is going to protect them from a sexual predator who means to do them harm.

What will protect them from these animals, as Assemblyman Fiore so eloquently stated, is a bullet to the head.