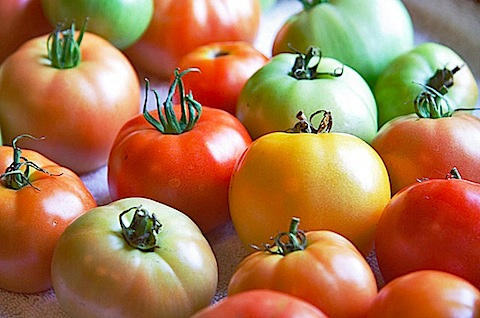 The tomatoes originated in South America and is now grown around the world . More than 15 million tons are harvested in the United States alone each year . Tomatoes are America’s favorite garden vegetable. While it is commonly referred to as a vegetable in culinary literature, tomato is actually a fruit. Tomatoes are usually easy to grow and a few plants provide an adequate harvest for most families .This vine plant is fairly easy to grow and will produce a bumper crop with proper care.

The tomato plant is a tender, warm-season perennial that is grown as an annual in summer gardens all over the continental United States .They are usually red when mature  but can come in a variety of colors, including yellow, orange and green .The water content of tomatoes is around 95%. The other 5% consist mainly carbohydrates and fiber .It is an excellent source of vitamin A, C , K  and other antioxidants .

Tomatoes should be firm and fully colored. They are of highest quality when they ripen on healthy vines and daily summer temperatures average about 75°F. When temperatures are high  the softening process is accelerated and color development is retarded  reducing quality . For this reason, during hot summer weather, pick your tomatoes every day or two, harvest the fruits when color has started to develop and ripen them further indoors.Tomatoes produced by traditional methods are harvested and transported while still green and immature. To make them red before selling artificial ethylene gas is used .The disadvantage of this is that it does not lead to the development of natural flavor and may result in tasteless tomatoes .

“It is all about money. The growers simply are not paid for good flavor. . . . The grower is paid for producing pounds of product.” 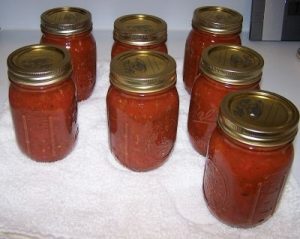 Bring a large Dutch oven or stockpot of water to a boil over high heat.

Core out the stems from the tomatoes . Drop several tomatoes into the boiling water. Cook until you see the skin starting to wrinkle and split 45 to 60 seconds, then lift the tomatoes out with the slotted spoon and plunge them into the ice water.

When finished blanching, use  a paring knife to strip the skins from the tomatoes. Working in batches pulse the tomatoes in the food processor. Pulse a few times for chunkier sauce until smooth for a pureed sauce. Transfer each batch into the Dutch oven or stockpot. Process through a food mill for a smoother sauce. For a very chunky sauce, skip this step entirely and let the tomatoes break down into large pieces as they cook.

Transfer the hot sauce into sterilized canning jars. Top with new, sterilized lids, and screw on the rings until finger tight. Process in a pot of boiling water for 30 minutes. Let cool completely on the counter ,refrigerate that sauce and use it within a week . Canned tomato sauce can be stored in the pantry for at least a year.

Whether you refer to a tomato as a fruit or a vegetable, there is no doubt that a tomato is a super-food that most people should be eating more of .Tomato is consumed in diverse ways, including raw, as an ingredient in many dishes, sauces, salads and drinks .It is an excellent source of vitamin C , K  and other antioxidants .Tomatoes are juicy ,sweet and may help fight several diseases.

When an early frost forces farmers to harvest tomato plants  they may find themselves with an abundance of green tomatoes.Green tomatoes are unripe tomatoes that have not yet turned red . They are less sweet than ripe red tomatoes .Green tomatoes may have initially been an unwelcome discovery but many people enjoy eating them fried, in stews  or even pickled to this day .

Plain green tomatoes are low in calories and nutritious on their own, but many recipes using them are less healthy .Modifying your recipes can make them healthier .Green tomatoes contain an alkaloid called tomatine, which may effectively fight cancer cells  and are good sources of potassium, a mineral that regulates blood pressure, contraction of muscles and fluid balance. 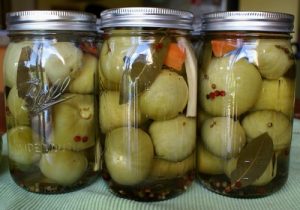 2. Wash the jars and lids with soap and water, rinse. Fill a stock pot with water and let it boil. Submerge jars and lids into boiling water for 5 minutes to sterilize. Grab them with tongs, drain the water and set upside down on paper towels

3. When all the jars a dry, turn them up, set them onto a large sheet pan. Pre-heat the oven to 350 F and place the jars in the oven for about 10 minutes to heat them.

4. In a large stock pot, combine water, vinegar, salt and sugar. Let it boil until sugar and salt dissolves.

5. Take the jars out of the oven. Fill them tightly with the small green tomatoes. If your tomatoes are big, quarter them before putting into jars. Don’t overfill! Also place 2 bay or cherry leaves, 1 stick of horseradish and 1.5 tsp of peppercorn into each jar. Take 2 carrot sticks and place them cross-wise on the top of the jar (to press the tomatoes).

6. Pour the water-vinegar mixture into jars to cover the tomatoes. Jars and liquid both, need to be hot. Cover with plastic wrap for a while. When they have cooled down, put the lids on.

7. Store in a cool, dark place. It takes about 6 weeks for green tomatoes to pickle. Use them just as you would use pickles.

The Case for Hybrid Seeds

What You Need to Know to Start a Fall Garden