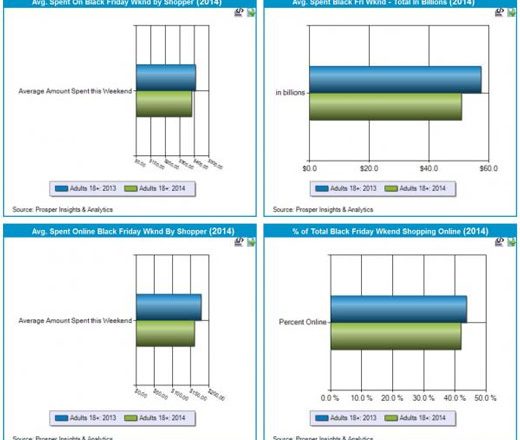 This report was originally published at Zero Hedge.

Last year was bad. This year is an outright disaster.

As we reported earlier using ShopperTrak data, the first two days of the holiday shopping season were already showing a -0.5% decline across bricks-and-mortar stores, following a “cash for clunkers”-like jump in early promotions which pulled demand forward with little follow through in the remaining shopping days. However, not even we predicted the shocker just released from the National Retail Federation, the traditionally cheery industry organization, which just reported absolutely abysmal numbers: sales during the four-day Thanksgiving holiday period crashed by a whopping 11% from $57.4 billion to $50.9 billion, confirming what everyone but the Fed knows by now: the US middle class is being obliterated, and that key driver of 70% of US economic growth is in the worst shape it has been since the Lehman collapse, courtesy of 6 years of Fed’s ruinous central planning.

Demonstrating the sad state of America’s “economic dynamo”, shoppers spent an average only $380.95, down 6.4% from $407.02 a year earlier. In fact, as the NRF charts below demonstrate, there was a decline across virtually every tracked spending category (source):

As the WSJ reports, NRF’s CEO Matt Shay attributed the drop to a combination of factors, including the fact that retailers moved promotions earlier this year in attempt to get people out sooner and avoid what happened last year when people didn’t finish their shopping because of bad weather.

Also did we mention the NRF is perpetually cheery and always desperate to put a metric ton of lipstick on a pig? Well, hold on to your hats folks:

He also attributed the declines to better online offerings and an improving economy where “people don’t feel the same psychological need to rush out and get the great deal that weekend, particularly if they expected to be more deals,” he said.

And of course the sprint vs marathon comparisons, such as this one: “The holiday season and the weekend are a marathon not a sprint,” NRF Chief Executive Officer Matthew Shay said on a conference call. Odd how that metaphor is never used when the (seasonally-adjusted) sprint beats the marathoners.

So there you have it: a 11% collapse in retail spending has just been spun as super bullish for the US economy, whereby US consumers aren’t spending because the economy is simply too strong, and the only reason they don’t spend is because they will spend much more later. Or something.

Apparently the plunge in Americans who even care about bargains is also an indication of an economic resurgence:

The retail trade group said the number of people who went shopping over the four-day weekend declined by 5.2% to 134 million, from 141 million last year.

Finally, what we said earlier about a surge in online sales, well forget it – it was a lie based on the now traditional skewed perspectives from a few self-servcing industry organizations:

Despite many retailers offering the same discounts on the Web as they offered in stores, the Internet didn’t attract more shoppers or more spending than last year. Online sales accounted for 42% of sales racked up over the four-day period, the same percentage as last year, though up from 26% in 2006, the trade group said.

But the propaganda piece de resistance is without doubt the following:

“A highly competitive environment, early promotions and the ability to shop 24/7 online all contributed to the shift witnessed this weekend,” Mr. Shay said.

So to summarize: holiday sales plunged, and Americans refused to shop because the economy is “stronger than ever” and because Americans have the option of shopping whenever, which is why they didn’t shop in the first place. That, and of course plunging gasoline prices leading to… plunging retail sales, just as all the economists “correctly” predicted.