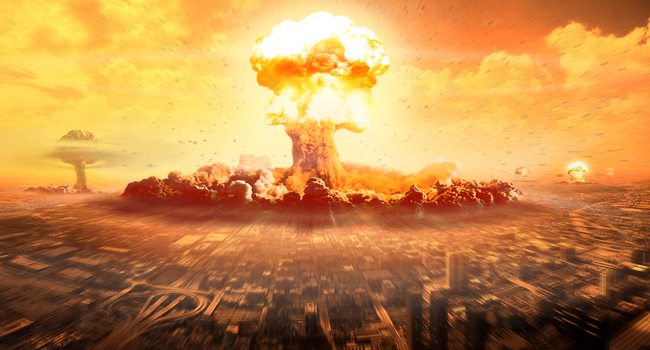 Amid collapsed diplomatic efforts over Syria and increasing tensions with the United States, the Russian government is beginning emergency response exercises on Tuesday that will include the participation of thousands of government officials and many millions of citizens who will respond to a mock nuclear attack or other large-scale catastrophe.

The four-day drill will reportedly include 200,000 rescue professionals, tens of thousands of emergency vehicles, and an estimated 40 million civilians from around the country.

The exercise, versions of which have been held in the country since 2012, take place following an announcement by Russia that it will pull out of a long-term plutonium disposal agreement if the U.S. and its NATO allies do not reverse a recent military build-up in eastern Europe and the Baltic countries.

The emergency drills also comes on the heels of the announcement by the U.S. State Department on Monday it was severing diplomatic communications with Russian over the deteriorating situation in Syria following the collapse of a cease-fire agreement and an intensifying assault by Syrian and Russian armed forces against the rebel-held city of Aleppo.

“The United States is suspending its participation in bilateral channels with Russia that were established to sustain the cessation of hostilities,” announced State Department spokesperson John Kirby on Monday. Kirby said it was “not a decision that was taken lightly” as he blamed Russia for failing to “live up to its own commitments” on the joint effort.

Countering the narrative put forth by Kirby at the State Department, Russian Foreign Minister Sergei Lavrov argued that many U.S. officials had sought to ruin the Syria deal with Russia from the very beginning.

“Regrettably, from the very beginning there have been many of those, including in the US administration, seeking to break down these agreements,” Lavrov said Tuesday. “And it is still more regrettable that those who are against political settlement of the Syrian crisis, against the implementation of the relevant resolutions of the United Nations Security Council and who are openly seeking to employ a force scenario ultimately managed to do that yesterday.”

Lavrov called the current situation “regrettable and deplorable,” and criticized the U.S. for its failure (or inability) to separate rebel factions from extremist militias allied with Al Qaeda or to help secure a key route, including what’s known as Castello Road, heading into besieged sections of Aleppo—both key parts of the brokered cease-fire deal.

“Due to internal contradictions,” Lavrov explained, “the United States has turned to be unable to implement its liabilities under out agreements not only in what concerns separation of the so-called moderate opposition from Jabhat al-Nusra [an Al Qaeda-affiliated militant group recently renamed Jabhat Fateh al-Sham] but also in what concerns the extremely clear, concrete liabilities on unblocking Castello Road as a major route to solve Aleppo’s humanitarian problems.”

And as Maria Zakharova, a spokesperson for the foreign ministry, explained to Al Jazeera, “Washington simply did not fulfill the key condition of the agreement to improve the humanitarian condition around Aleppo.” Now, she added, “After failing to fulfill the agreements that they themselves worked out, they are trying to shift responsibility on to someone else.”

In the end, said Zakharova, “It all essentially came down to a simple question – who are Jabhat al-Nusra, who is behind them, and why can’t Washington fulfill its promise to divide the terrorists from the so-called moderate opposition?”

As the U.S. and Russian officials traded blame, outside critics of the White House called the suspension of diplomatic channels by the U.S. troubling.

James Carden, writing for The Nation, said the “collapse of talks takes the United States one step closer to an unnecessarily deadly ‘military solution’ to the Syria crisis” as he called it the “most dangerous development in a New Cold War.” Such a development deserves fierce rebuke, Carden indicated, especially when it comes amid growing calls among influential members of the national security apparatus to impose a “no-fly zone” in Syria as a way to counter Russian and Syrian targeting of jihadist rebel forces aligned against the government of President Bashar al-Assad.

“A military solution, and facile promises of easy answers like the imposition of no-fly and/or safe zones (which are neither easy nor answers) is not the way forward,” warned Carden. “Obama and his advisers have made a potentially grave error in cutting off talks with the Russians, and even a cursory glance back through the history of recent American military interventions should steer them back to, not away from, the negotiating table.”

According to Parry, a “propaganda war against Russia” in the U.S. and western mainstream press “is spinning out of control, rolling ever faster downhill with a dangerous momentum that threatens to drive the world into a nuclear showdown.” Though he acknowledges the Syria-Russia situation is deeply complex, Parry argues that a misinformation campaign is putting the United States on a worrisome, yet familiar, path:

“This propaganda apparatus now has so many specialized features that you get supposedly ‘progressive’ and ‘anti-war’ organizations promoting a major U.S. invasion of Syria under the guise of sweet-sounding policies like ‘no-fly zones’ and ‘safe zones,’ the same euphemisms that were used as the gateway to bloody ‘regime change’ wars in Iraq and Libya.

“There exists what intelligence veterans call a Mighty Wurlitzer, an organ with so many keys and pedals that it’s hard to know where all the sounds come from that make up the powerful harmony, all building to the same crescendo. But that crescendo may now be war with nuclear-armed Russia, which finds in all this demonizing the prelude to either a destabilization campaign aimed at ‘regime change’ in Moscow or outright war.

“Yet, the West can’t seem to muster the sanity or the honesty to begin toning down or even showing skepticism toward the escalating charges aimed at Russia. We saw similar patterns in the run-up to war in Iraq in 2002-2003 and in justifying the ouster, torture and murder of Libya’s Muammar Gaddafi in 2011.

“Western propaganda also has enveloped the conflict in Syria to such an extent that the American people don’t understand that the U.S. government and its regional ‘allies’ have been supporting and arming jihadist groups fighting under the command of Al Qaeda and even the Islamic State. The propaganda has focused on demonizing Syrian President Bashar al-Assad, while downplaying or ignoring the real nature of the ‘moderate’ opposition.”

Carden also summoned Iraq and Libya as cautionary tales for the Obama administration, but said the stakes are perhaps even more elevated given the numerous military interests now operating inside Syria. Unlike Iraq and Libya, he explained, “both the Russians and Iranians have personnel on the ground in Syria, while the Russian and the Syrian Arab Air Forces are executing an air campaign over rebel-held (or more accurately, jihadi-held) east Aleppo. The mainstream media continue to gloss over the rather salient fact that civilians who are trying to flee the Russian-Syrian bombardment are often blocked from doing so by US- and Gulf State–funded ‘rebels.’”

Also raising concerns, a group of veteran officials from the U.S. intelligence community on Monday issued an open memo to President Obama warning him against the continued erosion of U.S.-Russian relations. As opposed to cutting ties, the former intelligence officers called on Obama to increase cooperation by holding direct one-on-one talks with Russian President Vladimir Putin as a way to avert deeper divisions and a more protracted war inside Syria.

“We strongly recommend that you invite President Putin to meet with you in a mutually convenient place,” the memo asserts, “in order to try to sort things out and prevent still worse for the people of Syria.”

It remains unclear as of this writing whether or not Obama received, or has read, the memo’s warning.