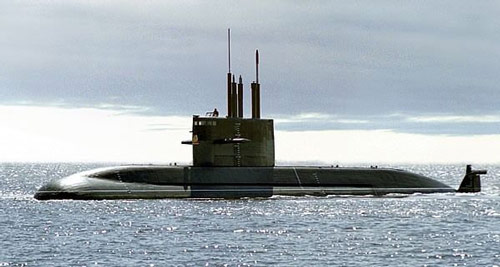 This article examines the roots of Russia’s eleventh-hour posturing for an offensive and outlines the possible actions they may pursue.

(Pictured: Dubbed “The Black Hole Of The Ocean” this Russian Kilo Class Submarine is built with advanced stealth technology and sound dampening tiles. It has a range of 4800 nautical miles.)

As of this writing, the hotbed is the Ukraine; however, this is the opener, as the main event in all probability is the defeat of NATO and the U.S. in Europe. The prize: reclamation of all former Com-Bloc satellites previously held by the Soviet Union and the possible conquest of the United States of America.

Yes, the Soviet Union. The Russian Federation, if you prefer. They face a paper tiger: a hollowed-out, command-decimated United States military that is but a shadow of its former self. We have been weakened from within. SHTFplan reported in January of 2013 of how our TARS (Tethered Aerostat Radar System) lining the Gulf of Mexico was mothballed on 3/15/2013, dropping our response time for incoming missiles from 1-2 minutes to 10 or more. After concessions, command-purges, and downsizing, our fighting forces, once the greatest in the world, are now a skeleton.

Enter Vladimir Putin. He vigorously conquered and dominated the Crimea. The contested point was Sevastopol, a critical Russian naval base that enabled her to have access to the Mediterranean. February 28, 2014 the Russian military was sent into Sevastopol. In that time frame, a larger event went unnoticed by most of the world: a blockade by Russian destroyers of Sevastopol harbor. The blockade kept in Ukraine’s only submarine detecting vessel and a command vessel. Indeed, it was the only non-Russian ASW vessel in the Black Sea.

By sheer coincidence, no doubt, the Russians had just rolled two Varshavyanka-class submarines (improved Kilo class boats, designated “project 636”) into the Black Sea. These Kilo-class subs have advanced stealth technology with the outer hulls covered in sound-damping tiles. The U.S. Navy has dubbed these the “black holes” of the ocean because they evade both sonar and AWACS. They have a cruising range of 400 miles and in their complement can hold 8 SAM’s or cruise missiles. Designed for shallow water operation, they have an extended combat range of 4800 nautical miles and can be refueled. These stealth boats can dive to 300 meters.

As you are well aware, the Russians have been running all of the Cold-War bomber routes along the U.S. West Coast, the Gulf, and the East Coast. On March 16, the Russians began extensive air force drills in Siberia, and communications exercises in the Eastern military district. The Russian Northern Fleet with 38,000 men, 41 ships, and more than a hundred planes are conducting Polar exercises in postures toward the U.S. and Europe. March 17 saw Russian Iskander missiles deployed in Kaliningrad for SNAP exercises; these can be nuke-capable. That day also saw a Latvian military report of two Russian “black hole” subs shadowing their territorial waters.

March 18 saw the Airborne units activated and sent from Ivanovo to the Arctic, as well as activation of Spetsnaz units and deployment to LD (Line of Departure) areas. All of these operations are slated to occur until March 21, a significant day, because it is Friday.

All of this is rooted in the plan formulated by Gen. Alexander Shelepin, KGB-Director under Kruschev; he originated a 40-year plan to disarm and eventually defeat the West via strategic deception. The West, followed by the “release” of the satellite nations, would swallow a “managed” collapse of the U.S.S.R. Then would come the march into democracy and false-capitalism. All of this would lead to arms reductions, demobilization, and investment into infrastructure and economic development. Gen. Shelepin’s pursued agenda was spurring Western hopes of democratization, and then ruthlessly exploiting the situation. His plan worked.

An excellent work outlining this plan and Russia’s true stance is J.R. Nyquist’s Origins of the Fourth World War. In addition to this, read Viktor Suvorov’s Inside the Soviet Army. Soviet military doctrine has not changed one iota. The Russian military revolves around one concept: the Strategic Offensive. The best defensive operation for them is an offensive. They also believe that the best method of protection is a massive preemptive attack. And when is the best time for the attack? Friday.

Suvorov (the pen name of Spetsnaz and GRU-agent Vladimir B. Rezun) wrote this (p 195 of his aforementioned work): “In practice, what happened in Czechoslovakia was an operation by a group of fronts carried out swiftly and without warning. Significantly this operation caught the Czechs off guard – profiting by the Friday evening relaxation of the State apparatus after a working week.”

The field of battle is before us. Now allow me to “prognosticate” the most probable course of actions. The Russians have been prepositioning the subs, and when the moment is right, they’ll pop cruise missiles out of them. The missiles can reach a speed of 550 mph in about a minute. Right at the mouth of the Potomac would be perfect for one sub to pop out half a dozen. One missile incinerates D.C.; one climbs to 300 miles altitude and detonates for an EMP to send the U.S. into the Dark Ages, four more for the East Coast Cities of New York, Baltimore, Norfolk, and Philadelphia.

The West Coast would see the loss of Seattle, Portland, Los Angeles, and San Francisco. The Russians (and their allies the Chinese and North Koreans) will cut off the pipeline and annex Alaska, driving southward into the country east of the Rockies and cutting the nation in half. They could then seize the Mississippi and all of the arable heartland of the Midwest. The invaders would also want the Imperial Valley in CA, and all of the oil of the Gulf States.

Nyquist on p 201 (of his previously mentioned book) listed two vital principles for Soviet War-waging: “The enemy must be destroyed or conquered; the ultimate Soviet objective is total victory and not mere survival.” The Russians are great chess-players. They play a conservative game with each move a calculated risk thought out many moves in advance until the time to strike. Then they attack openly and decisively in a skilled and ruthless manner. They are great fighters. I know this from personal experience, and not from fighting alongside them. We are in the eleventh hour; let’s hope it isn’t too late to riposte as the clock ticks toward midnight. Remember, my fellow countrymen, there’s a Friday at the end of every week.

Jeremiah Johnson is the Nom de plume of a retired Green Beret of the United States Army Special Forces (Airborne). Mr. Johnson is also a Gunsmith, a Certified Master Herbalist, a Montana Master Food Preserver, and a graduate of the U.S. Army’s SERE school (Survival Evasion Resistance Escape). He lives in a cabin in the mountains of Western Montana with his wife and three cats. You can follow Jeremiah’s regular writings at SHTFplan.com.

Watch: This Is Why Russia Can’t Attack America: New Weapon Has “Near-Instantaneous Lethality”

War With Russia? The Russians Announce Any U.S. Warplanes Flying Over Syria Will Be Treated As ‘Targets’