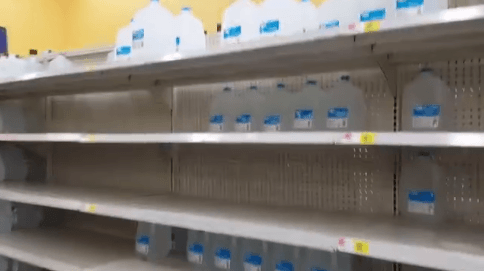 For those living in Florida, Georgia, South Carolina or North Carolina, and in the path, hopefully preparations have already been made – because store shelves are already running out of critical emergency supplies and the situation looks severe.

IF weather forecasts are worth anything in tracking and predicting the course of Hurricane Matthew, the Category 5 hurricane could make a dramatic double-dip around Florida, and batter the peninsula and the people on it twice over. Weird stuff, and it will very likely cause significant damage.

It is projected to be the most powerful hurricane to hit Florida in some 9 years, and may cause serious destruction to George, South Carolina and North Carolina as well. South Carolina is already in the process of forcibly evacuating over a million people.

According to the AP, evacuation has been urged for millions of coastal residents, and mandated for some low lying and poorly developed areas:

“I cannot emphasize enough that everyone in our state must prepare now for a direct hit,” Gov. Rick Scott said in a Wednesday press conference. “If Matthew directly impacts Florida, there will be massive destruction that we haven’t seen in years. This is a deadly storm approaching our state.”

“Failure to adequately shelter may result in serious injury, loss of life or immense human suffering.”

Voluntary evacuations are currently in place for parts of numerous other counties; the Florida Division of Emergency Management has a complete list. In total, about 1.5 million Floridians have been ordered or urged to move away from the coast…

For those not able or willing to flee, it may be necessary to have supplies to withstand several days or even weeks without power and essential services.

If you’re not in an area advised to evacuate, plan for adequate supplies in case you lose power & water for several days. #Matthew

As this video shows, bottled water is in short supply and other food staples are unavailable in some areas.

Very long lines of cars waiting for sandbags to hold back the floods, but in many areas including Orlando, the sandbags have long since run out.

Heads up anyone in Seminole County Florida heading to the Public Works Building in Sanford looking to fill sandbags. There is no sand and no bags. Spoke to city and they said it will be refilled tomorrow morning (10-06-2016). So the 24/7 sandbag operations there have stopped.

There is no doubt that the feds and state governments are coordinating for all emergency contingencies, and have martial law and the management of large numbers of people on the books and in the works, should it be deemed necessary. Some of these preparations are already in motion, though it remains to be seen how far things will go.

Southern Florida is particularly ripe for a major catastrophe because it has such a giant coastline, and because the peninsula has numerous major metro areas, and relatively few paths out of the state which will be clogged and immovable if enough people head for the exits.

Wherever you are, get ready.

The Lost Ways  is an iconic book of American history and is about early American pioneer survival skills. We as Americans, have lost our way. We depend on technology that can disappear in the blink of an eye. Imagine what it would be like without electricity, a car or not being able to buy food. Things that we take for granted on a daily basis. Our way of life can change in an instant. We are all vulnerable!
It doesn’t matter if you’re rich or poor, black or white. When a natural or man made disaster hits, you need to know how to survive!

We all remember the aftermath of Hurricane Katrina in New Orleans 2005. I hope we all remember! It was a catastrophe beyond words, RIGHT HERE IN AMERICA! Not in some other country half way around the world. It happened right here at home.Where was the government? It took 3 long days for them to respond! That’s a long time when you have no food or water. What will happen when the next disaster hits? I’ll tell you one thing, those people were lucky! They actually got help eventually. What if nobody came? We all saw the looting and heard about the crimes that went on. Society broke down and broke down quickly! Within a matter of days, some survivors started acting like desperate animals.

The point is, society broke down and these people did eventually receive help. The next time nobody may come. It will be up to you, if your family survives! Not the government, they don’t have the manpower for a nationwide CATASTROPHE. You need The Lost Ways book! You have to learn how to do for yourself and your family or you’re DEAD! There is only one person you can depend on. YOU!

5 Things the Bible Can Teach Us about Preparedness