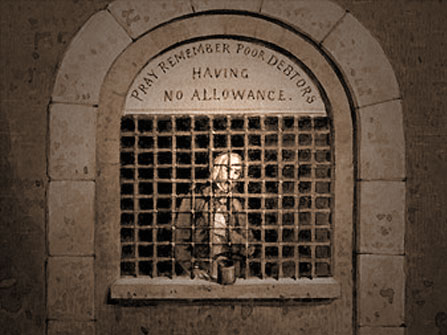 For ages, those who were too poverty-stricken to pay judgments and other outstanding debts were locked up, and forced to work it off under prison labor, along with the cost of incarceration.

But it fell out of fashion, and became an unlawful and unconstitutional form of punishment in the U.S. back in the 1830s, as well as in most other countries. The 14th Amendment strengthened equal protection under law, that is until recent decades. With new found economic pressures and plenty of new fines and offenses, debtors’ prisons are back.

And it is a harsh reality for thousands of struggling Americans. Many more could join them if they aren’t careful.

CBS Money Watch carried another in depth report on the growing trend of debtors’ prisons, a de facto result of thousands of Americans who are too poor to pay for heavy fines levied by private institutions contracted by municipal governments, or otherwise unable to keep up with the multiple demands of violations for traffic and other offenses:

For teenager Kevin Thompson, a traffic ticket ended up costing him not only his driver’s license, but also his freedom.

In his account of the experience, Thompson says he was ordered to pay $810 in fines by Georgia’s DeKalb Recorders Court, an amount that was out of reach for the low-income auto shop and tow truck worker. Instead of working with Thompson to find another way to pay, such as through community service, the court handed off Thompson to a for-profit probation company called Judicial Correction Services (JCS). JCS told Thompson he had 30 days to pay the fine, but also gave him erroneous legal information, such as overestimating the cost of a public defender.

Thompson notes that the court later took up a JCS officer’s recommendation to incarcerate him, resulting in a five-day stint in jail for failing to pay the fine.

Thompson, whose case was represented by the American Civil Liberties Union, is just one of the poor Americans ending up in a modern-day version of the debtors’ prison, an antiquated punishment that was eliminated by the U.S. in the 1830s.

The problem is exacerbated by the motive of private profit, and the collusion between public office and private contractors:

A rash of new cases are coming to light as municipal courts increasingly outsource probation to for-profit companies like JCS, which make their money by tacking on their own fees to traffic violations. They typically don’t charge the courts or municipalities for their services.

“Since 2009, we have been hearing increasing reports that people are being jailed for a failure to pay fines and fees,” Nusrat Choudhury, staff attorney in the ACLU Racial Justice Program, told CBS MoneyWatch. “We’ve observed that for-profit corrections companies are proliferating. They offer what appears to be a win-win to local governments because they offer to generate revenue from people who are too poor to pay on probation day.”

Thousands of courts across the country are using private companies to deal with individuals sentenced to probation and collect hundreds of millions of dollars in the process.

Added fees and monthly surcharges for probation periods create a “snowballing” effect where costs can quickly pile up into unmanageable sums of debt, making often petty infractions a road to endless entanglement with the criminal justice system, tacked with significant costs.

In the ACLU’s view, the relationship between municipalities and for-profit probation companies creates a financial incentive to generate profits at the expense of probationers’ rights.

“The profit incentive pushes the private probation companies away from identifying indigent people,” Choudhury said. “Because indigent people must by law have their fines waived, that cuts into company profit. The profit motive is distorting the proper functioning of the system.”

As SHTF previously reported, the specter of debtors’ prisons is a growing problem– officially outlawed in the 1830s in the United States, but back in unofficial form through a series of public-private criminal justice processes that can involve confusing fees and extra hoops to jump through.

In many states, simple traffic violations, failure to maintain auto insurance, as well as DUI, carry extra penalties known as “surcharges” paid to private collection agencies that can dwarf the amounts already demanded by courts for the initial offense.

For others, failure to pay certain fees or courses as part of a probationary agreement can trigger additional penalties. While the individuals caught up in this system may well be guilty of certain offenses, the punishment is often excessive, particularly when further penalties are added for failure or inability to keep up with payments and stiff fines.

The general economic woes for Americans in search of well-paying jobs and decent opportunities is certainly not helping matters, either.

Part of the problem is blamed on probation officers ‘not trained in Constitutional rights’ who apparently made routine threats to those caught up in the system:

The Human Rights Watch report noted that for-profit probation companies, while unable to send people to jail, “routinely threatened to have them jailed for failing to make payments or for falling into arrears.” The companies end up with “a great deal of coercive power,” it added.

Bail costs alone have proved a barrier too difficult for many to overcome, with hundreds of thousands stuck in jails awaiting trial or assistance with bail money, never mind what their crime may be:

It’s not only failure to pay traffic tickets that are landing Americans in jail. Across the country, there are at any moment 730,000 people who are locked up in a local jail because they’re too poor to post bail, according to a report issued last month by the nonprofit Vera Institute of Justice.

The numbers are as astounding as the United States prison population itself, which makes up a full quarter of the entire global prison population. Those prisoners, too, often have additional debts and penalties added onto their sentences, which they are able to “work off” for pennies a day while laboring for some of the world’s largest multinational corporations (who would profit from American prison labor even above cheap offshore labor).

Of course, many of those debts are really impossible to pay off, so it remains a weight on those who have served their time, however reformed.

The collusion and cross-interests of public-private partnerships absolutely impede on the rights of individuals, including those who are guilty of their crimes, but unfairly/excessively punished, or punished by a para-government system that amounts to corporatism – better known but less understood as “fascism.”

Folks, this is fascism; when there is very little demarcation between government and business. When corporations actually direct what the government does by first, buying it, then taking over government’s services for profit and then becoming it. Imagine what would have happened if we had privatized social security when Bush wanted to do it. A lot of people’s only source of retirement would have gone down in flames in 2008.

Watch: Socialist Exceptionalism: “Americans Who Look To Government To Save Them… Fail To Realize It Was Government Who F%*ked Them”