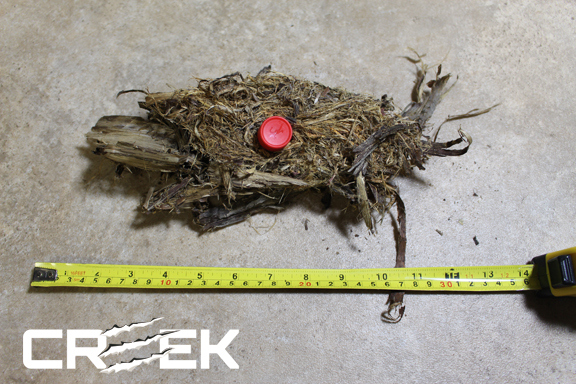 You’ve probably noticed that I’ll often send the guys off on the morning of their solo day with some kind of fire carry method.  The ability to carry fire is an important survival skill for a variety of reasons.

First, if you can carry fire, you don’t have to recreate your fire start all over again.  It typically takes less energy and calories to carry fire than to start all over from scratch.  Survival is all about conserving calories.

Second, it’s not hard to imagine that you’ve used the last of your fire starting materials.  Maybe you only had 1 match?  Maybe you’re all out of char cloth?  The ability to travel with fire once you’ve created it could truly be a life-saving skill if you have no other means of making fire.

Thirdly, rarely is a survival signal fire built right at a base camp location.  Oftentimes, survival camps are built under the cover of tree canopies and near building materials.  Signal fires are built in opposite type places – out in the open where they can be seen by rescue planes, ships, vehicles or crews.  The ability to carry fire from survival base camp to a signal fire location could be the difference between being rescued or passed over.  When every second counts, you may not have TIME to start a fire from scratch at a signal fire location.

One of the easiest and most popular fire carry methods I know of is often called an Apache Match.  Primitive peoples both in this country and others have used similar methods to carry fire from camp to camp and even on long hunting/scouting trips.  This method of carry can last anywhere from several hours to several days.  I’ve heard rumors of Apache matches lasting for weeks but I would imagine that this is in fact a series of Apache Matches rather than just one.

The basic principle is to contain a burning coal inside of a tinder bundle.  By limiting the supply of oxygen and keeping the coal in a near-smothered state, it allows the coal and surrounding tinder to smolder for several hours.  I’ve had many Apache Matches last for 3-4 hours with little effort and maintenance.

Below are the steps to creating an Apache Match that is approximately 12 inches in length by 4 inches in diameter.  One this size can be expected to last anywhere from 2-3 hours depending on a variety of conditions – mostly how much oxygen the coal gets.

STEP 1:  The Coal and The Bundle

I typically use a bright red coal from the fire bed.  This is represented by a red 5-hour energy bottle cap in the following photos

The coal can be anywhere from 1″ to 2″ in diameter.  It can also be a collection of small coals.  This coal is embedded in between 2 big handfuls of tinder material.  ‘Tinder Material’ is the same as a tinder bundle.  In this case I’m using shredded cedar bark.  Grasses, cattail down, dried seed heads, dry inner bark and plant fibers would also suffice.  Even shredded newspaper would work in an urban scenario. 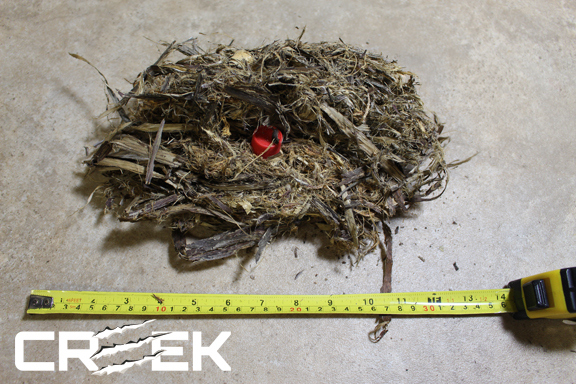 This photo shows the coal getting ready to be covered by 2 big handfuls of tinder material. 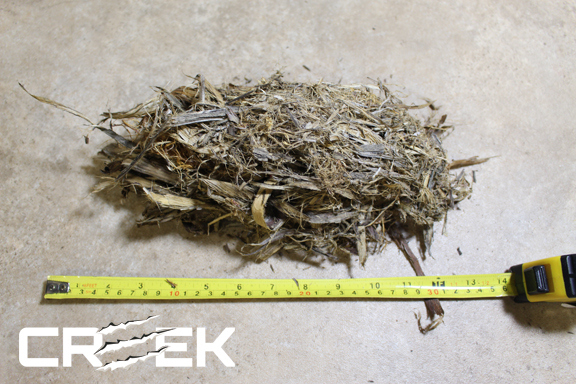 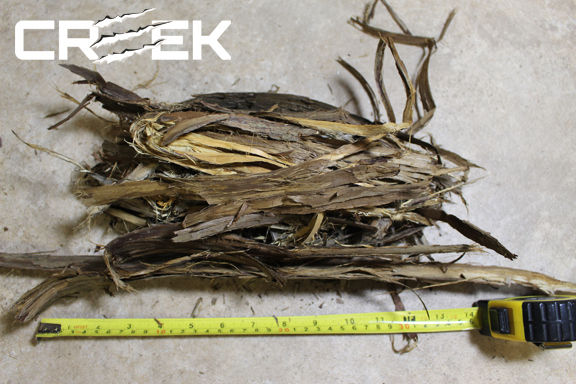 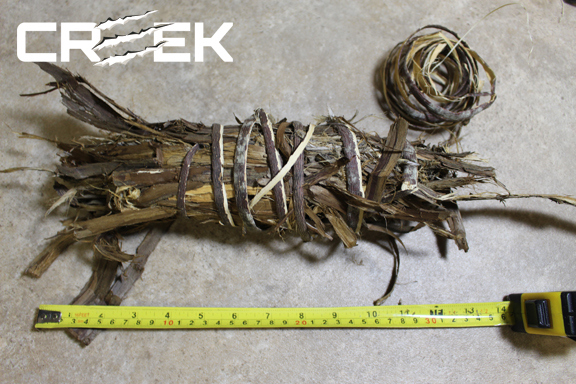 Next, you need to add an exterior layer to the bundle.  This not only helps keep everything together but it also helps protect your hands.  These things can get a little hot when traveling.  The outer layer shown here is also cedar bark.  I left it in big strips versus ‘fuzzing’ it down to tinder material like on the inside.  You use any kind of bark really.  It can be dry or green, it doesn’t really matter.  I’ve even used cardboard before.  Don’t get too particular.

Lastly, you want to loosely wrap the bundle in order to keep everything together.  This one is wrapped with willow bark but you can use anything – paracord, a hoodie drawstring, a shoestring, dental floss, plant fibers, yucca leaves, etc.  Don’t make the mistake of wrapping it too tight.  There is a delicate balance between too loose and too tight and only experience can tell the difference.  Too tight and you’ll smother the coal.  Too loose and the coal will spread through your tinder too fast.

Step 6: From Match to Flame 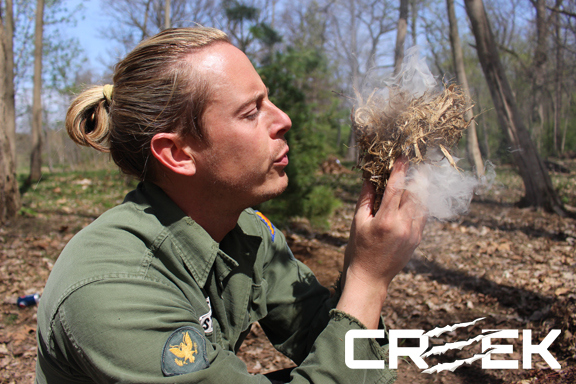 An Apache Match will require some maintenance and attention while traveling.  You may have to blow on it a little bit to make sure you’ve still got some heat.  You may have to tighten your lashings or even loosen them.  It’s important to check on it every few minutes.

Once you’ve reached your destination, making fire is as simple as unwrapping your Apache Match and blowing the tinder bundle into flame.  If you’ve done everything right, flame should be just a few breaths away.

I really believe the ability to carry fire is a necessary survival skill.  Would you like to see more posts dedicated to survival fire carry methods?  I’ve definitely got some tricks up my sleeve for carrying fire in Season 2!