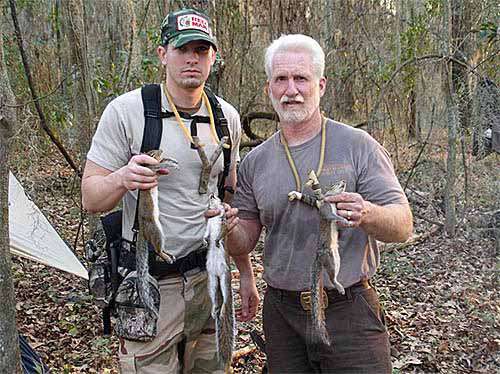 Madison Parker is a Navy SEAL instructor, survival school instructor, and designer of a handmade slingshot proven highly effective in slingshot hunting. Survival is always having a “Plan-B.” This slingshot can be your “Plan-B” for that day you run out of bullets or simply want to hunt in silence, without alerting anyone to your presence.

I had been instructing the basics of traditional field craft skills. This was the finish of a five-day training cycle.

All seemed to go well and all left with the anticipation of the return trip for the intensive course which would be more advanced. The topics we covered in the basic course were plant fiber technology, friction fire, primitive traps, snares, deadfalls, primitive weapons, shelter and water.Now the time came to take it to the next level. This was the second cycle, a tad more serious, but exciting because we knew we were going to put our newfound skills to the test. We were headed into a very remote location, an island in the middle of what we call the big river. No way to get there except by boat. This island is about one mile long, 200 or so yards wide at the widest and tapers back to a point on both ends. This island is full of big towering red oaks with plenty of acorns and food for wild critters. To name a few, there are deer, turkey, squirrel, raccoon, armadillo, ducks and much more.

With the early morning, we were to all meet at the boat ramp where we would launch our three-day Slingshot Hunter/Gatherer Course. The first day was already spent servicing our slingshots and tuning up our shooting skills. The second day brought with it plenty of cold air, not too bad, but enough to make you realize that this could be very uncomfortable if we didn’t do it right. Of course, the gear was only the slingshots, plenty of projectiles and one blanket each. We did all agree that we would each bring two packs of ramen noodles. It was our hope that with the slingshots and traps, we would supplement our food with wild meat. No pots or pans for this trip, we would scrounge and forage for whatever we could find. It was our hope to find a good tin can or metal container to cook the ramen in.

Now right here let me say that if you are thinking that a slingshot can’t provide you with enough meat to live on for a couple of days, you haven’t seen my slingshots. These are not some store bought toys with little thera-band gold flat bands, that shoot small projectiles very fast, but break after a hundred shots or so. No, these slingshots are forthright killing weapons, designed to hit with tremendous power and energy.

The projectiles are selected to fit this slingshot and its band set only. Each band set has a particular type of projectile that fits perfectly for that band set. We have the best slingshot equipment anywhere in the world. We make them all one at a time.

Setting out by boat

We all loaded our meager equipment on the boat and anticipated a cold ride north. The wind was cold and in our faces as it was coming out of the north. We arrived securely, a little chilled, but that quickly dissipated as we began to select our camp and go about developing a series of shelters (debris huts) and wind breaks. This was selected on the south side of a small depression, thereby keeping the wind off us as much as possible. Then it was fire building time. The trainees went about selecting the proper wood for a friction fire. No matches or lighters on this trip. Not long, it was clear that these guys had learned their fire skills well and we had ourselves a bona fide fire warming our compact camp nicely. The warm fire was calling us to relax, but we couldn’t, not yet. We had to make meat!

With the two on-site catch dogs with us, we donned our slingshot harnesses and set out to H/G what we could find. We moved out with the technique of flushing, shaking vines in the trees and disturbing the forest. This is a team effort and must be well thought out in order to properly execute. One team in front and one team in back, two by two.It wasn’t long before we found our first squirrel high up in a big red oak tree. We worked together communicating, moving and shooting, staying with the squirrel as he moved, we moved with him. It wasn’t long before he began to tire. Our shots began to get him off his game. He made a choice to go to the ground, a wrong choice, as the two “pit bulls” caught him just as he hit the ground.

We took this squirrel without a single direct hit. We bagged this guy and started out for another, shaking the vines as we went. Feeling good about our first success, we were bolstered with confidence that “we could do this.” It wasn’t long before we found two more squirrels that beat us before we could mount a concerted effort. We continued on and were approaching the end of the island and decided to stop for a short break.

Caffeine from the leaves of Yaupon trees

It was at this point that I found some Yaupon trees. We began to gather the leaves for what would be our substitution for coffee. Yaupon leaves are full of caffeine. We would have some hot tea for tonight and in the morning. We made our turn back to camp and continued shaking vines and flushing.About ten minutes into our return trip, we found a raccoon in a squirrel’s nest. We all set up and took a few shots each. It wasn’t long before the ‘coon decided to take his chances on the ground.

That was the second bad choice made by a critter this day. The dogs made short work of him. He put up a good fight for about 30 seconds and then succumbed to the power of our two pit bulls. After gathering gear and bagging the ‘coon, we started for our camp.

The day was well spent when we returned. I sent the guys out to set their respective traps and snares for the night. We had harvested some Yucca plant for cordage snares, and one of the guys had some wire for his snare set. The other was developing a deadfall he had learned from his previous training. As they set about to their duties, I began processing and preparing the raccoon and squirrel for the fire. Keep in mind that we carried no pots or pans.

Cooking critters in the hide

We use a technique for cleaning critters, which leaves the hide intact, as the hide is used to roast them in the fire. After the proper time, you just take the critter out of the fire, let him cool and begin to peel the hide away. The meat will be fork tender. I learned this technique from some indigenous people in the Philippines. It works very well as long as you don’t overcook.The daylight was just about gone when the guys began to return from setting traps. It was finally time to relax and enjoy some of our day’s efforts. We would drink Yaupon tea and eat a few pieces of raccoon and squirrel meat. The dogs waited patiently for the roasted entrails, bones and remains. All were filled while we discussed our duties that tomorrow would bring.

Shelters provided warmth through the night

The morning came with cold air, but our shelters held up to the test, and we all remained warm during the night hours. Searching the fire bed for coals, we got the fire going and began to heat some water in an old “tin” that we found on the bank of the river. After that, we set about boiling more water for a couple of servings of ramen noodles. The warm soup was excellent, and we were pumped for our final day of hunting and gathering with the slingshot.I made a trip to the bank of the river where I found two moor hens right on the edge of the river. I quickly called to the guys to flank my position, and we would all collectively make a go of these two moor hens. After we were all set, we started raining down our shots and took them without any problem. We had to put out in the boat to retrieve the moor hens. Once that was done, we cleaned them and began to roast them for the dogs.

Nothing goes to waste: Feathers for fletching, bones for fish hooks, tendons for cordage

Down here in the Southern part of North America, we use moor hens for their gizzard. The meat is good, but the gizzards are a delicacy. Nothing would go to waste in our camp. If this was an extended stay, we would use the feathers for fletching the arrows we would fashion, the bones for fish hooks, and the tendons for cordage and bow backing.It was in our plan to repeat yesterday’s efforts. 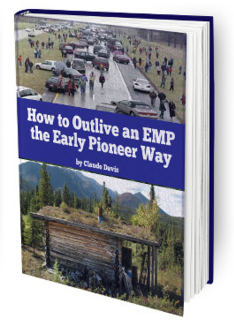 Taking down an Armadillo

After donning our SS harnesses, we started on our foray. Not too long after our start, we found an armadillo posted up about 25 feet away from my front. I called out softly and alerted the team to halt and let me take the shot. I drilled him right in the side, a solid hit. Hurt, but not stopped, he took off for a hole.At this point, the dogs took over and dispatched him without much effort. We retrieved him and began to process right away, as the weight of the critter was too much. We continued onward with a little pressure off as we now had plenty of meat for the final day’s nutrition. At this point, we were hunting for the sport and not so much for the necessity of survival. We found another squirrel and had to work rather hard to finally bag him. He pulled every trick in the book on us. Our efforts were successful, and we finished the day’s hunt with two moor hens, an armadillo and one squirrel.

This was a rewarding experience for all of us. All of the trainees left with the confidence that if found in a survival situation, they could make it in their effort to live off the land with a slingshot.

Madison Parker is a former active-duty Navy SEAL who spent 10 years with the unit. It is from this foundation that he shares his knowledge with any that are interested in learning the traditional wilderness living skills. His training classes average 4 to 8 people, but he still gives private one on one training sessions. Bulletproof Primitive Supply has been providing wilderness living skills training to the Navy SEALs, to the Army Rangers, to outdoorsmen, hunters, hikers and campers alike. All comers, families, fathers and sons, mothers and daughters are welcome to come and learn to enjoy the secrets of our natural resources and how to use them to our advantage. Bulletproof Primitive Supply has been in business since 1995.

Primitive Fishing Techniques: How to Catch a Fish in a Survival Situation