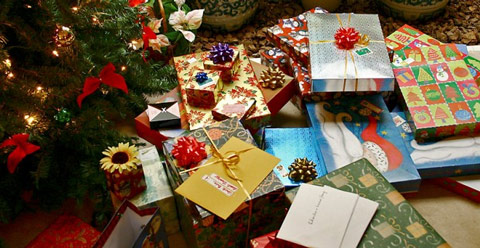 The annual trend of spoiled ungrateful brats taking to social media to complain about the Christmas gifts they did or didn’t receive from their parents has reared its ugly head once again, reminding us that vacuous materialism has replaced the true meaning of Christmas for many people in the west.

The United States has one of the highest child poverty rates in the developed world, with millions of families struggling just to put food on the table. With 32.2 percent of children living below the poverty line, America ranks 36th out of the 41 wealthy countries according to UNICEF.

However, that sobering reality wasn’t at the forefront of the minds of these individuals, who chose to publicly insult their parents and throw temper tantrums because they didn’t get an iPad or the correctly colored gadget. In addition, people are already selling their unwanted gifts on eBay.

Hundreds of thousands of children have been forced to flee Syria as a result of civil war ripping their home country apart, with many compelled to become slave laborers in Lebanon, with kids as young as five beaten with sticks as they toil in potato and bean fields.

Many of these children have lost their entire families and probably don’t even know what an iPad is. To compare their plight, in addition to that of Christians across the Middle East, who have been forced to flee Iraq and Syria in their hundreds of thousands to escape persecution, torture and death, to that of bratty teenagers (and some adults) irate at their parents for not spending hundreds of dollars on the latest tablet is humbling.

While a few of these tweets may be trolls, searching for terms like “didn’t get ipad” on Twitter will yield hundreds of genuine results from people complaining about their Christmas gifts. Here’s a selection of this year’s hall of shame;

My 6 year old stepsister cried this morning because she didn’t get an iPad for Christmas. Wtf has the world come to

Just got the papermate ink joy 100 1.0 M but it’s in the wrong color. Ugh pic.twitter.com/c2pyFMr1h9

& the brat of the year award goes to my 7 year old cousin:
“I wanted an iPad why didn’t I get one, are we poor?”

Ya so I got an iPad Air today, but was kinda disappointed that I didn’t get an Electric Drum set. Apparently it was “too expensive.” – Matt

like the only person that didn’t get an ipad mini

I asked for a new phone bc mine sucks so bad n I didn’t get it but my sister asked for 1d tickets, an iPad n a laptop n got it all wtf

my mum likes me sister more than me

@santa mr.claus I was very disappointed that I didn’t get a iPad this year, try harder next year, sincerely Dylan Barclay

My brother got a 5th Gen iPad for Christmas, and I was lucky enough to get shoes… #Dafuq

Today my little brother got a ps4, and an iPad mini, then complained that he didn’t get a lot.

stupid asshole parents didn’t get me an iphone 6 for christmas but got my sister an ipad so i smashed it #fuckparents pic.twitter.com/4sgzivWBxw

My parents don’t fell like getting a $ 200 Wii U for Christmas , but they pay/buy other things that are even more costy then a $200 Wii U.

Merry Christmas. I still don’t have a Wii U.

I just know my Dad is getting me that fucking Wii U for summer. Just like he did with the PS4. Sometimes I really hate my parents.

Step sister got an iPad mini , I didn’t get a laptop #fuckusanta