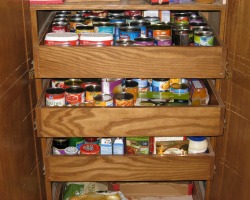 What food options should survivalists stock up on in a Bug In scenario?  The options seem endless, some easy to pick, others more complicated or requiring more detailed support to work.  It’s a good healthy debate for us.  Tell us what you think or

I have to admit of all the things I plan for as a part of my own personal over all Bug In course syllabus, I am a bit slack on the pantry prep.  Sure, it is loaded with enough standard can goods to last a couple weeks.  Some of it is stuff I probably would never eat in good times, but be dang thankful to have after the grid is down for a month or more.

I have soups in the can, and dry pack Ramen soups.  There are two dozen cans of assorted veggies but often more.  Canned meats include tuna, chicken, Vienna sausages, crab meat and salmon.  There are other canned goods that can be eaten alone or used to fix other dinners such as mushrooms, tomatoes, carrots, broths, and such.  I usually try to keep ten pounds of potatoes and a bag of onions.  I have flour, sugar, and tea bags. 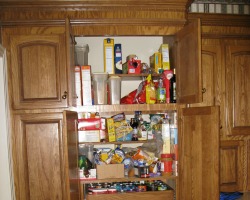 There are other foods, canned or in glass bottles including cheese spread, jellies, and salad dressings.   There is mayonnaise and mustard.  I usually have pickles, olives, and peppers.  I have some bottled juices of several kinds.  In one pantry drawer are cans of ready to eat stuff.  These selections include chili, ravioli, tamales, spaghetti, mac’n’cheese and such.  I have assorted boxes of crackers.  There are breakfast cereals, tarts, and some sweet stuff.  There are packages of cheese crackers.  If I dug deeper, I could find more.

If the Grid Stays Up

I fully recognize one tough fallacy in my planning is to rely on standard utilities mostly city water, but electricity as well.  I 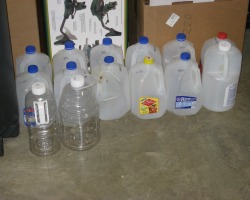 also have natural gas for the kitchen stove, fireplace logs, and hot water heaters.  I could do without electric power at least for a while.  I don’t have a gas powered generator as I don’t want to have to wrestle with the fuel issues.  I could revisit that.

I mainly need water for sure.  My refrigerator is stocked with regular type foods that would perish quickly without power.  Ditto on the freezer which is always overflowing with meats, frozen vegetables, frozen dinners of all sorts, entrees and snack on stuff.  Some of that food would last a few days as it thawed out eventually. 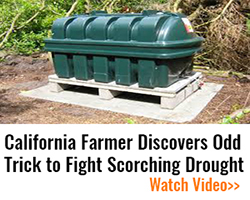 For sure if I lose power, I will be pretty screwed in short order.  If I lose water then some of the foods I have would be more difficult to fix.  For that reason I keep a reserve of 20 gallon jugs of water in the garage, and 2-3 cases of bottled drinking water.  I know that is not much back up for an extended Bug In.

Perhaps my biggest shortfall is in thinking that civil control would kick back in and essential services will once again come back on.  It may not.  I suppose that is just the risk I am willing to take to Bug In.  Personally I would rather have a shingle roof over my head than a nylon tent.  I’m too old for extended camp outs.

The big question for me is and may be for you as well is whether or not to invest more in long term storage foods aka survival foods since I plan to Bug In.  Be that freeze dried, water reconstituted, ready to eat, MRE’s or this type of containerized food.  Should I put money into shelf foods for six months to more than a year out?  I guess that is by definition one of the most basic questions to SHTF survival anyway. 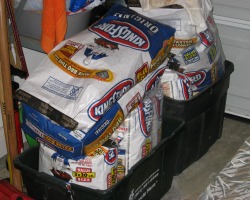 How long will we be stuck in any survival scenario, a week, month, years, or for the rest of our natural lives?  Like I said before I might not buy canned carrots for me to eat, but if I went several weeks without food, I’d darn be wolfing them down.  I feel the same about powdered potatoes or boxed dry eggs.  My fingers are crossed it does not come to that.  But I understand I may get real hungry while you Bug Out folks are eating potato flakes.

Also Read: Survival Debate – What Is The Ultimate Survival Vehicle?

I have a good friend that is building his own SHTF survival plan.  He keeps a huge garden in the summer, raises rabbits for food, and has chickens for eggs.  He keeps 2-300 pounds of rice on hand since his wife is Korean.  He has 50 cases of bottled water that he trades out for fresh.  He maintains an electric generator for his refrigerator and freezers in his machine shop.  He just bought a 90-day supply of survival foods.  He is way ahead of the game.  Way ahead of me anyway, but I still wonder even in his case with so much more in terms of food support did he need to spend hundreds on plastic pickle buckets of dry packaged foods.  Additional back up is never a bad thing?  What do you think?

What Do You Think?

So, you plan to Bug In, too?  What is your food situation?  What are you planning to do?  Do you have other ideas, options, or opinions?  Please share them with your Survival Cache brethren in the comments below.

How to Stock a Survival Pantry

25 Must Have Survival Foods: Put Them In Your Pantry Now