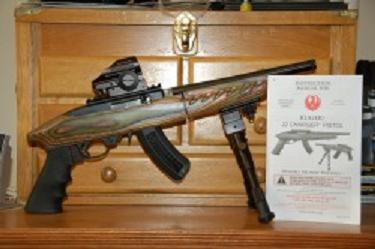 Some serious firearms are merely taken as fun guns.  Why not allow them to play the role of both?  Lucky for me, at a recent NRA Friends banquet, a friend bought be a raffle ticket to which it produced a winning selection of a firearm.  My choice?  It was a no-brainer for me when I saw the Ruger Charger, .22 pistol sitting among the group of choices that was left.  To discover it was the takedown version with the green/brown laminate stock sealed the deal. 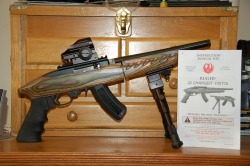 If you have not seen one yet, the Ruger Charger is classified as a pistol, but it is more than that.  Its overall length is 19.25 inches and weighs about 50 ounces.  They come in a fixed stock version and now a neat takedown model just like its big brother the regular Ruger 10-22 rifle.  They are available in both synthetic and wood stocks. 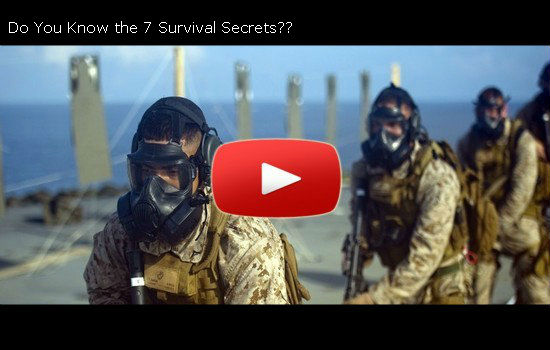 The metal is a sort of blued, matte black.  The barrel is 10-inches thus the pistol ranking.  The grip is a standard hard plastic A-2 AR-15 style.  There are no open sights on this rig, but it comes equipped with an add-on Picatinny rail on top of the receiver to mount a red dot optic or other type scope depending on what the user wants.  Also included is a short front mounted folding bipod that attaches to the forward sling mount with the supplied adaptor.

The Ruger Charger uses a BX-15 ®, 15-round capacity “banana” type magazine that slips into the action just like a 10-22 rifle.  In fact, the Charger’s action is really just the exact same one as the common 10-22 rifle action.  Therefore, it only shoots long rifle rimfire ammo, so don’t try to feed this one shorts or longs. 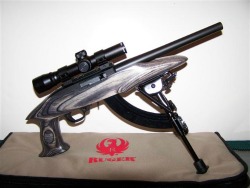 The barrel comes threaded featuring a ½-inch-28-thread pattern to accept most suppressors, or flash hiders.  These threads are capped with a factory installed thread protector.  The takedown process is easy.  A small lever under the action is pushed forward and the front barrel unit is simply rotated into its unlocked position.  Reassembly is just as simple and the barrel/forearm unit snaps positively in place.  There is a round knurled adjustment ring that is tightened upon attaching the barrel unit initially to the action. This properly spaces the barrel to the action.

The Charger comes packed in a plastic slide lock case, that frankly could be a better, more sturdy unit.  The lid on mine did not fit very well.  Once you assemble the pistol and attach the bipod, you are not going to use this case anyway.  I suggest getting a good, padded range bag to tote and store the unit.  The Charger retails for about $380, but shop around.

What Is It For?

Ruger suggests the Charger pistol is great for target shooting and small game.  Their info does not specifically use the term “hunting”, but one assumes that is what they mean by small game.  The .22 rimfire being what it is, this pistol could indeed be used for hunting and bug out pot food such as squirrels and rabbits.

If you were so inclined, the Charger could just as easily take down raccoon, opossum, and in western locales birds such as grouse, or even pheasant with some luck and patience.  The point is with some practice, this .22 pistol is just as capable of dispatching any game the rimfire can put down.  The attached bipod could be used to steady the pistol off the hood of a vehicle or the fender or seat of an ATV or SUV.  The bipod could also be removed to shoot the Charger off of a standing bipod or tripod or unit such as a Primos Trigger Stick.

Some may be thinking that the Ruger Charger is not a very practical firearm.   I think if preppers looked at one, held one, then got to shoot it, they would be inclined to think otherwise.  I mounted an AIM electronic red/green dot optic on mine.  This was something I had already and thought to put it to good use to try it out.  This optic has four switchable dot configurations that can be alternatively displayed in/on the glass optic screen.  There is the standard dot, a crosshair, a circle, and a sort of circle with a crosshair in it.  A rheostat on the side functions to change out the light intensity but also to go from red to green depending on the shooter preference. 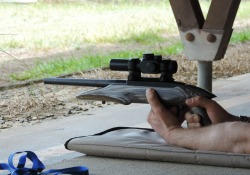 It attached easily to the Charger’s Picatinny rail on top via a cross bolt hex screw mount.  I did find that in cycling the action of the Charger to load it that my knuckle would bump into the sharp knurled optic control dial on the side of the unit.  That was a mild distraction, so I had to play with moving the optic forward and back until I achieved the clearance I needed to leave skin on my knuckle.

One other modification I made was to immediately swap out the factory A2 hard, slick plastic pistol grip with a nice, soft, Hogue AR-15 grip.  I have these grips on all my ARs and find them easier to grip and hold onto.  They are also not slick when wet.  The change out was quick and easy.

Anyway, first, off the bench using the bipod, this little devil can slap tin cans all over the place once I got it punching small holes in target paper from 25, then 50 yards.  It can gong a 10-inch metal plate all day long.  And I was using rather cheap rimfire ammo, if there really is such a thing these days.

I’m not one to press ranges with a rimfire, but I sure think this rig can take down small game out to 50 yards with a steady rest of some kind.  I plan to further test the pistol off a Trigger Stick once small game season opens.  The Ruger Charger could definitely be a field walk around gun, but I have got to ponder on a way to rig up a sling of some sort.   The jury is still out on the usefulness of the bipod except off a bench or flat rest.

When at my bug out camp, I have this theory about any gun being better than no gun, so even a .22 rimfire ought to scare away a poacher or trespasser with a few rounds in the vicinity.  But if not, then my AR is on the ATV and the 1911 is in my Diamond D chest rig.