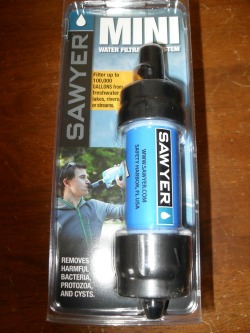 In any survival situation, from urban to wilderness, there are few resources as valuable as potable water.  As a survivalist, I put big emphasis on the value of knowing every possible method of obtaining and purifying water should one be caught without equipment.  All the same, a good filter is an essential addition to any kit, be it bug in, bug out, or simply your overnight hiking pack.  In a lifetime in the backcountry, I have experienced a range of different filters over the years.  But recently, a former expedition partner and good friend, who goes by the trail name Iron Man, caught my attention with something new.  This past year I joined him for a stretch of his five-month, 2,200-mile thru-hike from Georgia to Maine on the Appalachian Trail.  During that time he introduced me to the Sawyer Squeeze Mini, the unbelievably small filter that was his sole reliance for water for the duration of his trip. Let’s just say it didn’t take me long to become converted.

By Joshua Valentine, a contributing author to Survival Cache and SHTFBlog

Building on technology originally derived for kidney dialysis, Sawyer has developed a filter that is certified for what they call absolute microns. In other words, there is no pore in the filter of the Sawyer Squeeze Mini that is larger than 0.1 micron in size, which means that it is impossible for harmful bacteria, protozoa, or cysts to pass through.  Listed as a PointONE biological filter, the Sawyer Squeeze Mini, along with its big brother the Sawyer Squeeze, achieve the highest level of filtration currently available on the market at 99.9999%.

Also Read: Do It Yourself Beer Can Stove

So reputed is the technology that Sawyer’s next level filter, the Point ZeroTWO Purifier, which is rated to 0.02 micron in size, is the first and only portable purifier capable of physically removing waterborne viruses such as hepatitis and polio.  This filter is suitable for third world use, and has been helping to solve the world’s water crisis in over 70 countries while partnered with over a hundred organizations, including the United Nations.  In fact, the Sawyer’s filters boast that they are so powerful that they can no longer be used for dialysis on account of beneficial particulates being removed from the blood due to their efficiency.

The Sawyer Squeeze Mini kit is comprised of one Mini water filter, one 7” drinking straw, one cleaning syringe, and one 16oz reusable

water pouch.  The total kit weighs 3.5 ounces, and can be packed down to about 6”x3” using just a couple rubber bands, making it small, light, and easy to pack into any bag or kit.  In addition to its lightweight and extremely packable size, the Mini has no moving parts, eliminating the chances of breaking a handle or pump and rendering your filter useless.  Most impressively, the mini is rated to filter an astounding 100,000 gallons of water in its lifespan.  Retailing between $24.99-$29.99, this little giant takes the adage of “more bang for your buck” to a whole new level.

To operate the Mini, the first step is to fill the 160z pouch with water untreated water.  Next, attach the filter to the pouch’s threaded opening.  The bottom of the Mini is threaded as well to facilitate this.  By squeezing the pouch, the water is flushed through the filter and purified. One can empty the purified contents into another water bottle or container, or simply drink directly from the filter’s outflow nozzle.  In addition, the Mini can be attached to the drinking hose of most bladders, allowing the user to simply fill their bladder from the water source and then drink at will.

Lastly, the Sawyer Mini’s 7” drinking straw can be attached to the outflow nozzle, creating a life straw that allows the user to drink directly from a water source through the filter.  In an emergency, should your pouch get lost or damaged, the straw sees that one is still capable of utilizing the Mini to obtain safe drinking water.  Perhaps one of the most remarkable aspects about the Mini is that there are no expensive filter cartridges to replace. Ever.  By the 400-mile mark on the Appalachian Trail, Iron Man had already gone through 2 cartridges for his older filter pump.  At $55 each, he had gotten only 1,000 gallons out of each, and had been pre-filtering with a bandanna to boot.

While neither expensive nor complex, the Mini is certainly a high-end piece of gear, and needs to be respected as such.  The key to maintaining the Mini’s remarkable efficiency is as simple as consistent backwashing of the filter. Sawyer claims that a proper backwash will restore up to 98.5% of the filter’s flow rate.  In addition, consistent backwashing will lengthen the lifespan of your water pouch, as it will require less pressure to force the water through the filter, and thus less squeezing of the pouch.

To backwash the Mini, one need simply fill the backwashing syringe with water, insert the outflow nozzle into the syringe’s end, and press the plunger to flush water back through the system.  The syringe does not thread to the Mini’s outflow, so you will have to hold the two together.  In 5 months of straight use, multiple times daily, Iron Man’s Mini remained consistent and reliable during his time on the Appalachian Trail, due to a backwash after each use, and a generous backwash every 3-4 days.

The most glaring con for the Sawyer Squeeze Mini is the durability of the water pouches, as they are easily susceptible to damage and wear.  On the Appalachian Trail, Iron Man found that after about a week of use, estimated at around 6 liters per day or about 50 uses, the 16oz pouch had deteriorated to the point that it was no longer useable.  The most durable, efficient, and weight conscious replacement for the bags were plastic Smartwater bottles.

While not quite as space efficient as the pouches, the bottles were significantly more durable, and their rigid stature made squeezing water through the filter far easier and less cumbersome than the pouch.  It is important to note that the Mini’s threading does not match universally with all water bottles, so be sure to test the system before charging out into the woods with bottles instead of the pouches.  Iron Man used one bottle for unfiltered water, and squeezed it through the Mini into two others that he used for storage and drinking.

Secondly, the saying that two’s company, but three’s a crowd can apply to the Sawyer Mini.  When myself and another joined Iron Man on trail, we found that using a single Mini to fill multiple containers for the three of us could easily become a somewhat slow and step related process.  Any group larger than that could quickly become frustratingly tedious.  Despite this, I found that the Mini’s size, efficiency, and reliability all but rendered this con irrelevant.

For larger groups, one might consider the larger Sawyer Squeeze, weighing in at 4.2 ounces for the kit and rated for 1,000,000 gallons.  In addition to a larger filter allowing for a faster flow rate, the Sawyer Squeeze comes with 3 bags (12oz, 16oz, and 32oz) and a detachable drinking nipple.  Unlike the Mini, both ends of the filter are threaded, so that a Smartwater bottle could also be used to replace the backwash syringe if need be.

Lastly, the Mini does not hold up well for winter use. Cold weather quickly renders the filter very temperamental and brittle, subject to internal freezing or outright breakage. If one were to use it in a cold weather scenario, it is suggested that the filter itself be kept inside a jacket amidst one’s body heat at all times other than during use, and stored in the warmth of a sleeping bag at night.

In comparison to the Sawyer Squeeze Mini’s capabilities, however, these cons quickly pale. Ultimately, there is little argument against this being amongst, if not the greatest little filter you can get your hands on

About Joshua Valentine: A lifelong outdoors and survival expert, Josh combines years of backcountry experience  with a lifetime of unique and inventive fitness training, designed to prepare the body and mind for the rigors of the wilderness.  Josh holds certifications as a Wilderness First Responder (WFR), American Canoe Association Whitewater Raft Guide (ACA), and Personal Trainer (AFAA).  He is also a recorded Adirondack 46′r and White Mountain 4,000 Footer.

Off-Grid Survival: How To Track Food In The Woods