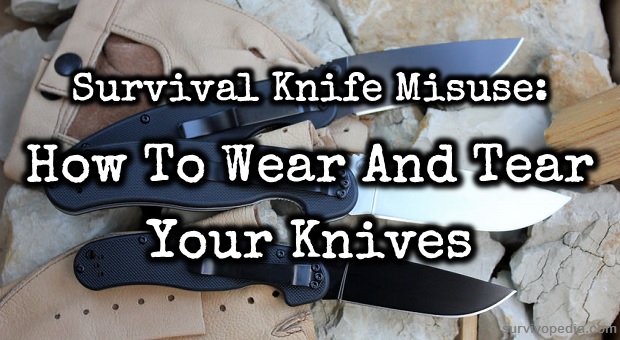 Regular knife users have learned to appreciate the versatility and usefulness of their blade. A knife is an essential part of your survival gear. It’s an investment much more than it is a purchase, because when properly taken care of, it may end up lasting a lifetime.

Though not all knives share the same quality standards, one thing is true about the majority of survival knives: they’re designed to withstand regular use for long periods of time. The question is: how should you care for your blade and what are the mistakes to avoid when using it?

Even the most rudimentary of knives needs to be taken care of, but more often than not, knives become damaged because of improper use and maintenance routines. This may be the result of distraction, inexperience, a lack of proper instruction or carelessness.

But make no mistake: a blade that isn’t properly taken care of will surely become an unusable blade. Let’s first discuss some of the most common mistakes that beginners make when using their knives. What are the bad habits that shorten the lifespan of your knife?

Not Knowing the Limits of Your Knife

Each material has natural limits that it cannot surpass. Knives are not exceptions of this rule. Yes, we may have been brought up in the confidence that knives are wondrous tools capable of withstanding absolutely everything. Similar to Japanese katanas or Thor’s magical hammer, we expect them to perform a plethora of tasks and have completely unrealistic expectations.

Make no mistake, knives are made of steel and steel should also be used with caution. Different knives are created for different purposes. It’s simple: you really can’t use a fillet knife to skin a deer.

Though you may try your hardest, the knife wasn’t designed for that task and will not only perform poorly, but will also have to suffer as a result. So instead of choosing the wrong knife (or an all-purpose-blade for any and all tasks), read up on useful guides on choosing the right knife and work from there.

Not Oiling Your Knife

Many knife enthusiasts regularly oil their blade to ensure that it remains in pristine conditions. You may already be doing this for folding knives (springs and joints), however, you may also apply oil on the blade of your knife. Just use a cloth to apply the oil evenly across the blade. This step is particularly useful in humid areas, where rusting is a concern.

Though the oil you use is subject to personal preference, I recommend Dri-Lube for folding knives. You can find it in any firearm store. Aside from drying on contact, it’s also easy to apply, doesn’t drip or run and will not attract dirt or lint. You’ve surely experienced this with folding knives: they’re simply lint magnets. Be watchful of overspray though.

Failing to Clean Your Knife

Just because you use your knife regularly doesn’t mean that you shouldn’t also regularly clean it. Running water is often enough, but you must always ensure to dry the knife thoroughly. This is a step that most beginners ignore and end up paying the price for. A knife that isn’t completely dry will never be rust free. Ideally, you should use a cloth that’s used specifically for this purpose.

Also, make sure to not forget your knife in water for longer periods of time.

Depending on your knife’s handle, you may have to also perform other maintenance tasks. Wood handles should be treated with linseed oil while leather handles should be cleaned with leather cleaner. If you own a knife that features a bone handle, never soak it in water.

There’s a specific purpose for each tool in your toolbox, but this simple concept seems to be lost when it comes to knives. Most people ruin perfectly beautiful knives by substituting them for screwdrivers. Don’t get me wrong, there are emergency situations when there’s no other solution and, despite some whispered objections, such substitutions may be understandable. Anything else is nothing short of abuse.

The tip of your knife is its most delicate part. It’s also the most useful because it makes precision tasks particularly simple to complete. That’s why you should always try to protect the tip. But more often than not, even when a screwdriver is readily available, knives are used in their stead.

Good quality knives won’t wear so easily and may withstand multiple substitution rounds, however, they will become damaged in the long run. Opening cans is another such example. Granted, some multi-purpose knives may be used to open cans, but a high-quality hunting knife, for instance, will certainly suffer.

Steel is a sturdy material, but as previously mentioned, it has its limitations. Steel has certain elastic capabilities, it resists abrasion, corrosion and vibration. But this resistance is limited and you’ll surely damage your blade if and when those limits are exceeded. When a blade is made to pry in small spaces, it is forced in the direction in which its structure is less resistant. This may result in the blade being curled or damaged.

Failing to Sharpen Your Knife

While it may be true that any survival weapon, even a dull knife, is better than none in a situation that demands it, there’s no excuse for not properly sharpening your survival knife. In fact, let’s get one thing straight: even if you own the best survival knife that money can buy, if it’s dull, it simply won’t cut.

A dull knife is just as useful as a fork in a survival situation. This only leads to frustration. Now, in such a sticky situation, there are things that you can do to sharpen your knife. In all others, use the multitude of tools that ensure proper sharpening.

Whetstones are the oldest (and perhaps simplest) way to sharpen knives. Your father, his father and his father before him used whetstones. You’ll want to make sure that you always maintain a consistent contact angle between the whetstone and the knife and respect the angle of sharpening that your knife came with.

Video first seen on How To Make Sushi

Sharpening rods are another popular sharpening system because you only need to position the knife vertically on the sharpening rod and swipe it down while pulling the knife towards you.

Never attempt to sharpen your blade on power-driven grinding wheels, as they burn the temper from your blade. Another common mistake that beginners make is pressing too hard when sharpening their knives against diamond sharpeners. Make sure to read about the best ways to sharpen knives or ask more experienced knife users to show you how it’s done.

Steel doesn’t only sustain mechanical damage. Extreme temperatures are also harmful to your blade. Sub-zero temperatures can make the steel brittle and increase its sensitivity to vibration and impact. On the other hand, extreme heat may damage the hardening of your blade.

You know that something’s wrong when your blade doesn’t return to its normal color after being cleaned. If it displays shades of dark brown, yellow, or even worse, blue and violet, you know that the hardening is lost. In those portions where the discolorations appear, the steel of the knife is softer and can be damaged with ease.

Environmental agents are just as likely to corrode a blade, especially if the steel is non-stainless steel. Some knives come with their own holster, but consider protecting your blade if you don’t want it damaged.

Your knife’s handle is also important: water, glues, humidity and chemicals can all damage it. More importantly, in the case of folding knives, failing to regularly inspect the pins is another mistake that beginners tend to make.

Knives are meant to be used, however, there are moments when you simply don’t use your knife. Simply abandoning a knife in a shelf will do a lot of harm. Ideally, you should store a knife in a shaded and protected area.

Make sure that it’s not exposed to direct sunlight or humidity (as moisture affects the blade) and don’t store the knife inside a leather sheath as it attracts moisture and creates pits on the blade.

Failing to Repair Your Knife

A knife is bound to take the occasional beating, however, most knife owners will hurry and repair the blade themselves instead of taking it to an authorized technician. Note that some high-quality knives have a lifetime warranty that becomes void when you attempt to repair them.

Using the Blade as a Makeshift Fire-Striker

Granted, we already cautioned against using a knife for anything other than its intended purpose, but this particular case is worth drawing attention to. I’m what you call a knife elitist: knives are tools that must be cherished and taken care of, however, there are some who believe that they are mere instruments to be used however their owner sees fit.

This is something I strongly disagree with. I’ve seen people using the blade of their knives when lighting a fire with ferro rods. Damage to the blade is guaranteed. More importantly, it’s a shame to disrespect a blade like that.

Using the Knife as a Makeshift Shovel

This also happens. But chances are that your knife will come into contact with hard rocks that will end up chipping your blade. You’re better off avoiding this altogether.

Did we miss anything? Tell us your thoughts in the comment section below!

This article has been written for Survivopedia by J. Thomas Roberts from Knifeista.

J. Thomas Roberts is an outdoorsman at heart and in life. Thomas enjoys exploring the outdoors with his 8 children and wife. From an early age Thomas has researched and used many survival knives. He has a vast knowledge of all types of survival gear and is and expert is survival knives. Thomas thrives on sharing is knowledge of the outdoors and gear with young and old alike, on his site – Knifeista.

How To Use And Train Dogs For Survival