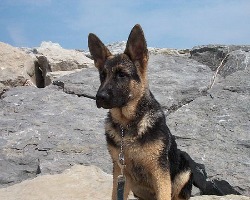 Many folks are debating whether it’s good to have a dog during a survival situation or not.  For most dog owners, this is an easy question to answer.  They are a part of the family, so they go. But what if you are thinking of adding a dog to your survival plans?  If so then it is a definitely a good idea to think it through before making a decision.  There are so many dogs that are left stranded during a SHTF event.  I have seen people leave dogs tied up and left behind when they get scared and have not properly prepared for their animals.

By Chuck Savage, a contributing author to SHTFBlog & Survival Cache

During Hurricane Frederic in 1979, I had someone I know stake their dog out in front of my house and flee to Georgia without saying a word to me. Rescues are always busy during times of disasters. They are left with caring for the animals and then trying to find them good homes.  Dogs have been known as man’s best friend for ages and they have earned that title. Mankind began this special relationship by domesticating the grey wolf around 30,000 BC in Asia. According to Wikipedia, there is archaeological evidence found in a cave in the Altai Mountains where Russia, China, Mongolia and Kazakhstan meet, that man owned domesticated grey wolves at that time.

So this is probably good reason to believe that these folks found these early dogs to be very useful in survival situations. Early man was in a state of survival everyday of their lives. They depended on these animals for an early warning security system, a beast of burden, fur and sometimes food. It’s believed that possibly man sharing his kill with wolves led to the domestication process.

Just as these dogs would be an asset to early mankind, dogs could be a source of help today in a survival event. I’m not advocating that all people would be better off with a “survival dog” but they definitely have their pros and cons.
Some people just should not own dogs.  Dogs are a huge responsibility to care for. Now that they are no longer wild, they depend on us to provide for their needs. To keep dogs healthy you need to provide them with shelter, water and food. Then you have to consider the vet bills, the shots, and someone who can care for them if you have to leave for a period of time, and that’s the short list.

Advantages of Having a Dog

– Security and protection if they are properly trained and the right breed.
– Provide companionship and affection that helps to boost morale.
– A dog can be used to track four legged and two legged animals.
– Large breed dogs can be used to carry small loads.
(Native Americans made travois to carry small loads behind dogs.)
– Curl up with a dog and it can keep you warm at night.
(Australia Aborigines judged how cold a night was by how many dogs it took to keep you warm).
That’s where the 70’s rock band, “Three Dog Night” got its name.

Disadvantages of Having a Dog

– They can give your position away to an enemy if not properly trained.
– They are another mouth to feed and care for.
– They can slow your rate of travel.
– They can need medications, vaccines and heart worm treatment.
– They are barefooted so special foot protection is needed in rough terrain.
– They can take up valuable space.
– Owning a dog in a survival situation could cause you to have to choose between them or your family.

Owning a dog is a huge decision that everyone has to make.  If you are not a dog owner and are in the process of deciding whether it is for you or not, weigh all of the cost because too many people jump in and get a dog too soon.  There are so many dogs that end up discarded or in shelters.  Some people think they have brought home Lassie, Rin Tin Tin, or Bullet and find out their pooch is more like Mutley.  It is really easy to put unreal expectations on a dog.  I remember getting a Labrador retriever puppy and thinking of all the ducks and dove that dog would retrieve for me. WRONG! This poor dog wasn’t the least bit interested in fetching anything. No matter how hard I tried, I could not get that dog to hunt.

Just last year my wife and I rescued a one year old chocolate Lab and Boykin spaniel mix and after adjusting to her new home, she has naturally becoming an avid hunter. Don’t count out mix breed dogs.  Our experience has been that they are much better than purebreds because they are generally healthier, cost less because they can be found in rescues, and are stolen less than purebreds.  I’m not telling you not to buy a purebred dog, but if you choose to, make sure it is from an ethical and reputable breeder.  There are breeders out there that run what are known as puppy mills.  These kennels are all about just producing puppies without regard to genetics, health and mental health.

Bottom line, really think it through. If you already have a dog then you definitely need to be pet prepared. A well cared for dog will need a high quality dog food and be up to date on all of its shots, worming, flea and tick prevention, and heart worm medications. You will need bowls for food and water, leashes, harnesses or collars with identification and contact info.  Micro chips are great too but may be useless if the grid is compromised.  Foot protection could also be a great help to protect from broken glass and other hazards during a disaster.

How to Purify Water with Iodine for Survival

SHTF Survival: 10 Survival Tools That Should Be In Your Survival Pack