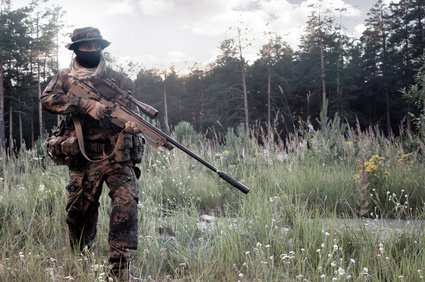 It might be handy to have a few skills at your disposal, in a time of collapse or major civil unrest or lawlessness — which might be in America’s near future.

Where the Special Forces Has An Edge on You

It might be hard for some of you to admit, but odds are you don’t have the overall strength and endurance of a Special Forces soldier. But did you know you can come darn close in many ways through physically challenging fitness regimens like “Crossfit”, or others you simply push yourself to tackle?What can you do about this? If your well in your years, and running, sprinting and vertical climbing simply are not an option for you, at the least build up your ability to hike, and to hike steep grades at long distances. Those who still have the knees, or youth on their side, should implement running short to medium distances into their fitness routine.

As fitness improves, add-in light “dead-lift to overhead press” dumbbells (or barbell), and over the coming days and weeks gradually increase that weight. Soon quicken these movements, and you’ll use several muscle groups in one exercise. Like “jump squats”, a “Dead-lift to overhead press” is an exercise that can boost strength-gaining hormones in both men and women. Combined with your other exercises, you can make faster and bigger gains in multiple areas of strength and fitness.HGH (human growth hormone) is said to be one of the key hormones being released by your body — even in people well past their teens. Ultimately, in a survival situation, your strength, cardio, and endurance can all be powerful survival tools, especially if it comes down to “fight or flight”.

I’m going to recommend a product, and this is one that I will say personally can do wonders for your cardio / endurance. That product is called Maca Root. I discovered it by accident (?) in recent weeks, when a celery seed extract supplement I had purchased online failed to arrive, and instead a bottle of “Maca Root” showed up by mistake. Instead of sending it back, I decided to look up “Maca Root” on the web, and found out that it’s origin is in South America, where it was reported to give “warriors” in centuries past strength and endurance in battle. I do train in combat sports (at varying times) and decided to put it to the test. It works. That’s all I’m going to say. Try it. What I found is that it’s somehow slow acting. That means if I take it on day one, it’s not until day two that I see the full effect. Somehow it works on hormones in a way that seems a lot like turning back the clock to about the age of 20 (?). Maca root is potent. It is reported to improve health in other areas as well — my interest is the fitness and strength training aspects of Maca Root. I can’t (or won’t) vouch for other claims rumored to surround this root.

Special Forces soldiers are trained (including classroom training) in many types of scenarios they may find themselves in, whether planned or unexpected. This type of training helps soldiers learn to make calculations in their head; how to approach an area, how to exit an area, danger points and “choke points” to watch for. Also, calculations on enemy targeting; where is an enemy weak at? How can an enemy be distracted? Where would be a good place for a sniper? Where’s a secondary place, if an enemy might know how to spot and avoid likely sniper locations? Etc.What can you do about this? Simply put, you can learn how to think strategically, and plot routes using just a pen and paper based on certain types of environments or terrain you may encounter in your region in a time of collapse. With pen and paper, and maps, this is just practice. Learn to be strategic. Take the time to think. Plan for an ambush. Calculate a way to escape and even better avoid it.

For example, if you’re likely to cross through a city or suburb, where are the most dangerous places likely to be? What would be the best time of the day to travel through that area, if there’s no other way around? How about just before dawn, when most people will be sleeping? Can you (and others with you) devise a way to distract any dangerous elements so your group can sneak past into safer territory? Plot these down on paper. What if there is a detour you can take around a danger zone / area of lawlessness? What tools will you need to get through barbed wire or chain link fencing? What tools (hint, duct tape and hammer), can you use to break glass into a building without making a lot of noise? (Layer strips of duct tape over glass, then hammer at the duct tape; the window will implode, the glass will not make a loud shatter).

If you have a small shovel, (or an improvised tool), how fast can you dig a trench and conceal yourself under dirt and brush? With practice you might be able to do this in just 3 – 5 minutes. A pursuing enemy may simply walk on by, and not realize you’re hiding just yards away (as long as they don’t have tracking dogs).

Sudden, crushing pain isn’t a pleasant place to be. But in a survival situation, you may one day be in that pain, and now you can’t simply lay down and wait for the paramedics to show up. There may not be any paramedics. That fact, combined with the sudden, crushing pain, can stop you fast in your tracks. Another fact: Fear, tears, and agonizing pain will put a lot of people down for the count.

What can you do about this? A mental commitment to ignore the pain, and a drive to “keep going” will be keys to getting yourself out of the danger zone, if you’ve been wounded, and there’s no help coming. This is a survival situation to meditate on, just so you’re mentally prepared in advance and not blind-sided by the situation one day. There are a few things you can do to condition your mind now, to learn how to “keep going”, despite pain or discomfort. One: Take cold showers. Really cold showers. Day after day. Challenge yourself to endure long cold showers. Two: Hike, run, and / or sprint on steep inclines, such as treadmills with 15% or higher incline setting (be sure to condition your legs in advance, before simply going for it). If you live in an area with long stretches of hill, you can skip the treadmill all together. The point is to get your brain accustomed to you meeting pain / discomfort with “aggression” — as you’re pushed mentally by the pain, you push back mentally with aggression.

(Sometimes you may want to stay put on the ground, and not move, after you’ve been wounded, especially in a combat zone. Why stay put? Because your movement can draw fire back in your direction. So don’t move. You are playing possum. Wait for the firing to stop, continue to play possum, and carefully plot your escape route from the field of battle; when you do make your move, stay low, hide behind objects, look for natural camouflage (even in an urban environment), etc).