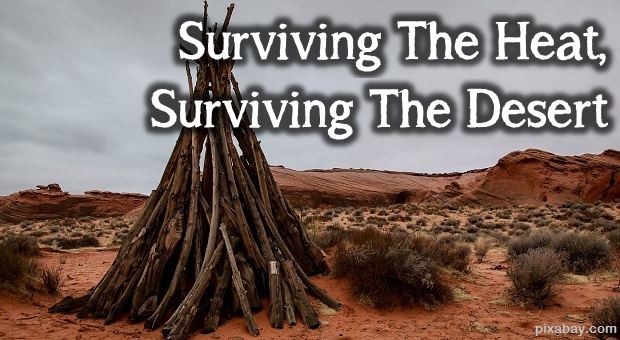 Deserts are some of the most brutal and inhospitable landscapes found on the face of the earth. The combination of little to no water, coupled with extreme heat make survival a very chancy thing. Even the nighttime, when the heat lifts for a few hours is dangerous, as the extreme drop in temperature makes it possible to suffer from hypothermia.

Nothing in our makeup is designed for surviving a desert environment.

That’s not to say that it’s impossible to survive in the desert though. People have done so for centuries in various parts of the world. Mostly, this has been trading caravans who cross the desert, but in a few places, people actually live in desert lands, eking out a living from the dry ground.

Contrary to popular belief, not all deserts are endless sand dunes. While deserts can be sand, they are just as often dry ground or even rock. Some vegetation may exist, but it is spread much farther apart than the vegetation found in wetter climates. Those plants, not all of which are cacti, need to be able to make the infrequent rainfall last them, so they often, have leaves with thick, waxy or plastic appearing skins, to help keep their moisture inside.

What defines a desert is the lack of rainfall. This creates an environment that is hostile to all life, as both plant and animal life need large amounts of water to survive. So, the number one priority for surviving in a desert is to find water and keep it in your body.

The starting point has to be in retaining your body’s water. This is even more important than finding more water to drink. If you can’t keep your body’s fluid inside your body, then it doesn’t matter how much you drink, it probably won’t be enough.

The problem is finding shade that you can use. There aren’t too many things in the desert that actually provide shade, unless you can find a cave. However, I wouldn’t spend the time searching out a cave, simply because of the water you’ll lose trying to do so.

You’ll probably need to build some sort of overhead cover to protect yourself from the sun. A simple sun shade, made from a tarp will be enough. You don’t need anything elaborate. Make sure that you can adjust the sun shade, and your position, so that you’ll be able to stay in the shade throughout the day. Sleep as much as you can, so that you can be awake at night.

Make Use of the Night

In the desert, the night is your friend. The lack of sunlight allows temperatures to drop. In some cases, they may drop by as much as 50 degrees. This can cause hypothermia, so you want to be careful. Don’t allow your body temperature to drop, even if it does feel good.

Any work or traveling you do should be done at night, when you are protected from the sun. This will help you to avoid sweating excessively and losing your body’s water. Take time to improve your shelter, so that you will have better protection from the sun the next day.

Allow yourself to spend some time at night looking for a cave. If you have any rock outcroppings nearby, that’s a good location to search out. Caves will always be cooler than the above-ground temperature, sometimes significantly so. Underground caves may also contain water, helping solve that survival problem as well.

In the Yucatan Peninsula of Mexico, there are underground lakes in caves, known as “cenotes.” While traveling in the Yucatan I encountered many of these. The temperature averaged about 20 degrees cooler than on the surface and the water in the cenotes was cool and clear. 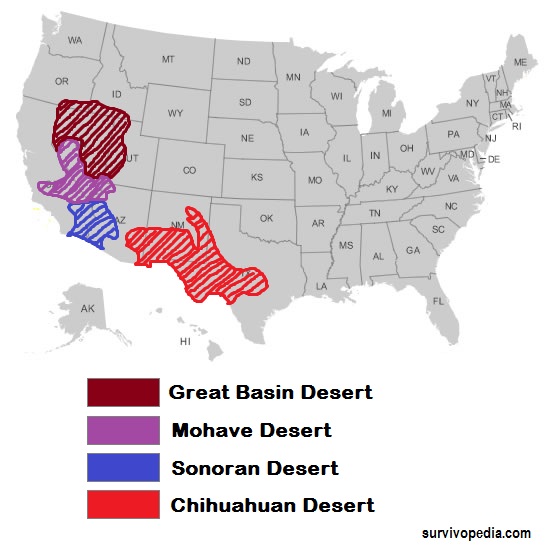 Put Your Clothing to Work

You’ve probably seen pictures of Arabs in the desert, covered by long, flowing robes. Those robes are important to their survival. First of all, they are white, so that they don’t absorb sunlight, but rather reflect it. Likewise, you want to wear light colored clothing as much as possible, to protect yourself from the sun.

Their clothing is also multi-layered. The idea here is to keep the body’s moisture close to the body. Sweat is held against the skin, so that as it evaporates, it can help to cool the body, like it’s supposed to. Sweat that drips off the body or is wicked away from the skin by clothing, does little to help cool the body.

Don’t try to work during the day, as physical activity is one of the main means in which the body produces heat. As muscles burn simple sugars to function, they produce that heat as a by-product. Better to wait until night, when you can use that heat.

Water, Give Me Water

Once you’ve provided yourself with some shade and clothing to prevent loss of your body’s water, it’s time to turn to thinking about adding to the water in your body. Ideally, you’ll have a bunch of water with you or manage to get yourself stranded by one of the desert’s water holes. But chances are, that won’t be the case.

Nevertheless, there is water in the desert, if you know where to find it and how to extract it. Without the right means to extract it, you could kill yourself trying to hydrate. Many of the things you have available, which contain water, also contain chemicals you should not ingest, so you’ll need a means of extracting it.

Where to Find Water

Start your search for water by looking at yourself and what you brought with you. If you have any drinks with you, those are a good source of water. However, beer will actually make you more thirsty, than it will satisfy thirst. So, you may want to extract the water from the beer and only drink that.

Water can also be found in anti-freeze, although the rest of the anti-freeze is poisonous and urine, although once again, drinking urine is poisonous, as it has a high mineral content. The purpose of urine is to expel excess minerals from the body, so drinking urine would just put those minerals back into the body; not a good plan. But the water can be extracted from the urine.

Look around you, as well. What kind of plant life is available? Are there any trees? What types of brush or cactus can you find? Anything with green leaves contains water. Harvest these plants and extract the water from them.

Look for likely places for streambeds and pools as well. If you see dried mud in a stream bed, there’s a good chance that there is underground water. Digging down a few feet might just provide you with a seep that will give you water that you can drink.

How to Extract Water

To make a solar still, dig a hole in the ground. If you have found a dried-out water hole with cracked mud in the bottom, that’s an ideal location. You’ll also be able to extract water out of the ground, at the same time you are extracting it out of plants. Make the hole several feet in diameter and about two feet deep, with angled sides.

Place a small container in the bottom of the hole, with a piece of plastic or rubber tubing anchored in the container. The other end of the tubing should reach several inches outside the edge of the circle.

Place anything you want to extract water from into the hole. You can pour anti-freeze and urine directly onto the ground in the hole. Leaves of plants should be cut open, as should cactus leaves, if you can. The water extraction will be much slower if they aren’t cut open. Spread the plants out and don’t pile them high enough to touch the plastic that’s going to cover the hole. 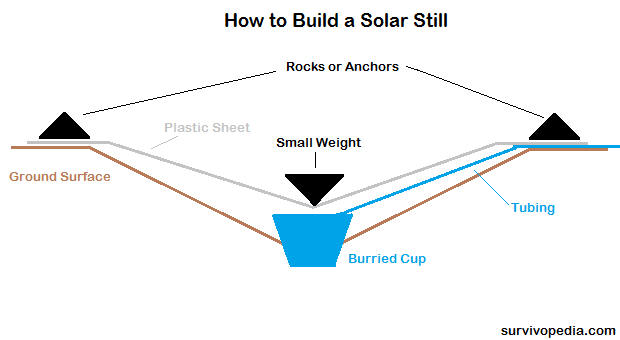 Spread a sheet of clear plastic over the hole, anchoring and sealing it to the ground all the way around. Make sure your tubing is sticking out beyond the edge of the hole. Place a small stone in the center of the plastic, directly over the container you placed in the bottom of the hole, so that it causes the plastic to dip at that point.

The sun shining in the hole will heat the ground, turning the area inside the hole into an oven. That will cause evaporation of the water in the ground and foliage, which will rise until it hits the plastic cover. Condensing there, due to the relative difference in temperature, it will flow downhill to the point under the stone, where it will drip into the container where you can use it.

As you can see, surviving in the desert requires proper preparation. While it is theoretically possible to survive without the right survival gear, not having that gear greatly reduces your chances of survival. Make sure you take along plenty of water, as well as the necessary tools and materials to make several solar stills.

Then you’ll be properly prepared to survive.

15 Tips For Surviving Journeys Through The Wild