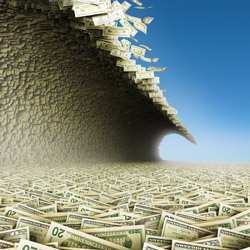 Be prepared for a difficult market, prolonged and distorted by nearly unlimited liquidity, printing and intervention on the part of the Federal Reserve and other central banks.

Billionaire Swiss fund manager Felix Zulauf sounded off about the instability of the market and the potential for major ups and downs as currencies go volatile and the impact of loose money takes hold. Investors today face a difficult landscape due to the possibilities for major currency devaluations and economic conditions that are manipulated to a level the world has never before seen.

The money pumping is enough to distort not only the landscape, but to change the gravity as well.

The new frontier seems to be holding to value, with negative interest rates offering not a race for return, but for safe harbor. Foreign investments could be shaky, or even crumbling with a stronger U.S. dollar crimping trade, and potential devaluations of the Euro and Yuan each a ticking time bomb.

As Zero Hedge posted, Zulauf explains that these problems cannot be corrected by pumping more liquidity into the system, even though that is exactly what nearly every major central bank is doing:

“Global demand has weakened due to structural reasons. This is a situation that cannot be improved by pumping liquidity into the system. Zero or even negative interest rates have distorted the valuation and pricing of virtually all assets.” “Investing becomes very difficult in such an unprecedented environment, as it can’t be compared to previous situations.” “We know that the longer a distortion prevails, the more investors get used to it and it becomes the “new normal” to them. That’s where the problem lies!”

As it stands, a number of truly global forces are bending events to their will. Asset bubbles will form and shape around the central bank interventions. Zulauf writes:

Market investors will respond to these currents, and likely drive prices to unnatural and “unsustainable” highs according to the Swiss billionaire. Meanwhile, pumping liquidity to stay afloat in Europe is also creating a false sense of normalcy that is due, at some point, for a reckoning.

And then there’s China.

The yuan, while gaining momentum a new world reserve currency, is also weakening significantly and could set off a tidal wave of “deflationary pressure” that could knock down the global economy.

It is clear that individuals are caught up in an overwhelming and unforgiving system. Without a sophisticated understanding of changing currencies, one could easily be caught off guard and take a serious hit in the market.