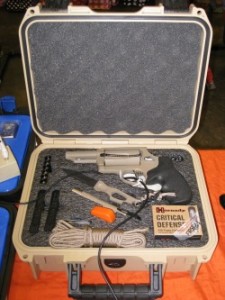 Sometimes preppers simply have to accept a product for what it is, and get past what it is not!  I know of very few items out there in the marketplace today that are truly “end all” items.  If I bought a cast iron skillet for Bug Out campfire cooking, somebody would criticize it for being too big, not big enough, too heavy, don’t like black, or it stays hot too long.  Whew.  A garden hoe was not meant to jack up a car to change a flat tire.  Know what I mean?  Unfortunately, the survivalist/prepper movement is much too much this way it seems about every new “survival” product that comes on the market.

And Lord bless us, there sure is no shortage of self-proclaimed expert critics about everything related to survival gear.  This is a bog we all have to wade through to arrive at our own logical conclusions about the value and necessity of one product over another.  That differs for all of us depending on our particular circumstances.  Take all web based evaluations off the world wide wonderment from the common core with a round box of table salt (save the salt for later prepper use).  I will say though and give our SHTFBlog/Survival Cache family a shout out that the replies and comments to our posts are among the most well thought out and helpful.   But I digress here. called the “First 24” Kit.  It is by my assessment intended to be a quick “grab and go” case with some essential items a survivor might could use in the initial 24 hours of a Bug Out scenario or other SHTF event.  Now, this packaging has sort-of been done before by Smith and Wesson, but without the direct target marketing to survivalists per se.  The general concept was the same by putting a powerful handgun in a hard case with some additional accessories for emergency use.  I just within the last couple of weeks read a marketplace review of the Kit in a firearms industry journal.  My initial thought was it would be at least six months or more before I might actually see one.  So you can imagine my surprise when working a gun show in early March, I see one of the Kits on a dealer’s table, which I was able to inspect and photograph.   I have not had the opportunity to shoot the handgun, so do your own live assessment of the Kit.

This is what the factory kit contains, no more, no less.  It is what it is, so take the Taurus First 24 Kit at face value.  To beat a dead horse, I looked on line to get some other thoughts on this Kit before I passed on my own initial sight inspection from the gun show.  The reviewer gave it a pretty standard pan though he left out of the list of items in the box the excellent Hornady ammo, which I have used in my S&W Governor and my Bond Arms Snake Slayer IV with great success.  I think he simply copied the factory web site page which also does not list the ammo.

What amazed me the most was the 27 pages of reader comments, slams, and criticisms of the Taurus Kit for what it was not, nor was it ever intended to be.  People commented if it was to be used during the first 24-hours of an event why did it not include water, food, water purification tablets, shelter (really?), a water filter, wrong caliber handgun, no holster, duct tape, map (of where?), matches, cellphone (dah), signal mirror, and on and on and on.

This Taurus Kit retails for $1499.  The one I saw at the gun show was priced at $1200 and another gun shop operator told me he had one on the shelf for $1195 and it was covered in dust.  Take that for what it’s worth. the handgun enough to become comfortable and proficient with it.  The .45 Colt (Long Colt) uses a standard 250 grain bullet with a muzzle velocity of 860 fps and a muzzle energy of 410 foot pounds.  There are many other loads more powerful.  The .45 Colt is no slacker, but it demands practice in a handgun like this Taurus Judge.   It can kill deer (or man) sized game, but it is not a 50-yard target gun.  There is no rear adjustable sight on this handgun, though it has a green illumination front sight insert.  The .410 shotshell in this handgun could dispatch a snake, rat or small vermin and maybe pop a grouse or rabbit for food at a close range.  Using ammo like the Hornady Critical Defense which loads a slug and two round balls can disrupt an attacker at close and personal ranges.

The other gear in the kit certainly has some value, but keep in a healthy perspective the concept of the first 24 hours of an event.  Certainly it should go without saying that many other items like food and water, etc. needed to be added to supplement this kit.  As I said, this kit was not intended to feed or sustain a person at all, but to be used in initial escape and self-defense.  Those other items in the kit are well known named products of decent quality so again, they can be of some value to an initial strike out plan.  Preppers need to fully familiarize themselves with each item and understand their limited ranges of use.

Without a doubt this is an expensive kit.  I highly suspect that most preppers could gear out a similar secure box with relatively identical items at a much more cost effective expense.  If you are interested in the exercise, then research pricing out each individual item to tally up a total to see if the kit price is really a value.  You may well decide it is for you. The bigger questions are for yourself, is this a handgun you would buy or use for a SHTF event?  Are the other items in the Taurus Kit something you would use, or perhaps already have packed and ready in another mode?  Frankly, I could do without some of the items in the kit, but might add others.  I sense here an opportunity for another article.

Also Read: How To Fly With A Firearm

For me and my preferences, this handgun option would not be my first choice.  As I said I have a similar weapon, but it is not my primary weapon of choice for an on-person Bug Out carry.  This is not to suggest that this rig might not should be for you.  That is your choice of course.  This kit could make the decision-making process easier for some.  In terms of the knife, I carry a good pocketknife in a leather belt sheath.  I have more and better flashlights.  I also have all the other gear items in this kit.  However, the idea of this sort of “all-in-one” kit in a single box, does inspire me to rig up a quick carry bag, sack, box or something with some immediate need specialty gear items all assembled together in one tote.  Might we call it the SHTF Box or bag as a sort of micro-BOB?  I’ll delve into this idea and report.

One mistake I make is to rely on my primary Maxpedition shoulder sling bag as my No.1 immediate need carry bag.  But what I find in practice is that I can never remember which pocket or sleeve or hidden compartment individual stuff is in.  In a crunch I would get caught digging through this bag to quickly find what I need.  The idea of flipping open a hard case top to be able to immediately see all the gear items at once has some merit.  One has to think about during a SHTF if there is a screaming need to put your hands on a knife or compass or something else in a matter of seconds.  The self-contained Taurus Kit concept solves that issue.  Think about it.

So, what do I think of the Taurus “First 24” Kit?  Without getting to shoot and use the handgun, I cannot evaluate it.  Ask around at dealers or the range if anybody has experience with Taurus guns.  I have not for my own reasons.  This kit approach may be just the ticket for some, so I say keep an open mind and check it out first hand.  Or do as I plan to do and assemble your own SHTF First Day kit.