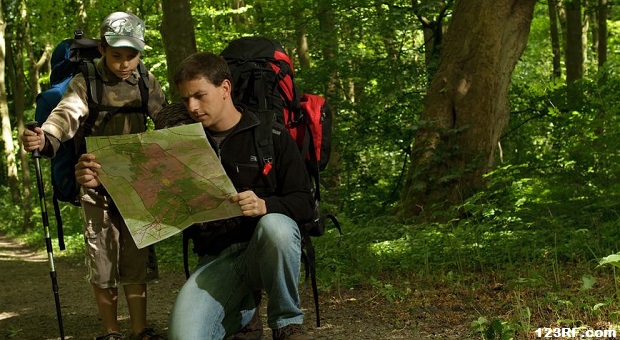 When crisis strikes, knowing as many survival skills as possible may mean the difference between life and death for your children. We’re not saying that they should teeth on AKs but we do believe that survival should be as natural to them as brushing their teeth. You don’t have to be aggressive or scary about it, but you should teach your kids how to take care of themselves as they grow.

There are a few basic skills and games that you can play to help make learning survival skills easy and fun for your kids.

Being aware of your surroundings can quite literally save your life and today’s kids are more interested in the handheld video game or cell phone that never leaves their person. That means that they can barely get home from school, let alone tell you who or what they pass on the way.

Fortunately, you can make it fun while you sharpen their skills.

The license plate game: Pick out as many out-of-state tags as possible. The most wins. This teaches kids to pay attention to details. You can modify it by picking out the most Fords or Chevys or black SUVs. Mix it up however you’d like but make looking for details the name of the game.

I Spy:Another good detail game. Pick out something while you’re driving or at the store, park, etc. Describe it and ask them to figure out what you’re talking about.

The Description Game: Have your kids look at an area, a person, a vehicle or an object then close their eyes and tell you everything that they can remember. Whoever remembers the most details wins. If you only have one child, have them give you a set number of details for a small prize or reward.

The Right Way to… Game: This game teaches your kids how to get home or to another destination. Have them pick out landmarks that identify the route. Also, have them give you directions to wherever it is that you’re going. Make it fun and offer a reward for getting it right. Do the same thing when you’re camping or hiking by picking out identifying landmarks such as trees or rocks.

You never know when something is going to happen and you will be separated from your kids. Maybe one of you won’t be home, or perhaps you just need to exit your house from different directions.

Regardless, have and practice an evacuation plan. Have designated meet-up points and have backup plans as well. For example, “meet here if we’re all in the house. If something happens and I don’t get there, go to …” Be explicit.

Teach your kids the S.T.O.P. acronym: Stop, Think, Observe, Plan. This will help keep them level-headed if they’re ever lost or separated from you.

Don’t be Afraid of the Dark

Fear of the dark can be paralyzing, especially if the situation is already stressful. Play games outside after dark if your kids are older. Make sure that the houselights are bright enough so that everybody can make it back.

If your kids are younger, play with them in the yard as it gets dark. Watch the stars and find the constellations. You can do this inside, too. Pretend the power goes out and operate inside with no lights for an evening.

This is a great way to practice other skills, too. While the electric is “out” practice not opening the fridge, as well as opening cans without electric, cooking outside and any other skill that you’ll need if the power goes down. Learn to play games too, since the TV is out of commission. It’s good practice.

Water is vital to survival but it can also be lethal. Teaching your kids how to tell the difference between water that’s safe and water that isn’t is a fundamental skill.

Just because the house is 100 feet away doesn’t mean that you have to use it. It’s a great way to camp with smaller kids while keeping the amenities close in case of emergency. Don’t use the house for any other reason, though.

Practice safely building fires (as long as it doesn’t get you kicked out of your HOA), cooking outside, and living without electric in general. Have your kids do as much as possible so that they learn how to do things for themselves. This teaches your kids to look for safe spots to hide or seek shelter. Pretty self-explanatory. Talk about the difference between hiding to stay safe from strangers who mean them harm, and coming out of hiding if they’re lost when search parties come near.

This is a great way for kids to learn about the usable items in their environment. Use it as an opportunity to teach them about edible berries, different types of trees or plants, or even let them find ten items that they feel would be most useful in a survival situation, and have them explain why. Have fun!

Kids love to play in the dirt and be helpful. Even if you’re only growing a few herbs in a window box, teach your kids how to do it as they grow.

It’s a useful skill to have even if nothing ever happens. It could save their lives if SHTF.

Thirty percent of Americans are clinically obese and unfortunately many of those are children. During disaster, it’s going to be much more difficult for your children to escape if they can’t even walk out of the yard without huffing and puffing.

Exercise with your kids, encourage active play and teach them the difference between healthy foods, treats, and foods that should never be eaten because they are downright bad for you. A healthy child will stand a much better chance of surviving a disaster, and so will you. Take good care of your body and teach your kids to do the same: it’s your most important survival tool.

How to Barter and Bargain

If you’re like most of us, you enjoy finding a good deal. Therefore, you probably see your share of yard sales or flea markets. If so, take your kids with you and teach them to bargain and barter, too. Teach them to be fair; make deals that benefit both parties while still saving you money.

Nobody wants to think about being separated from their children in an emergency but it’s a very real possibility. Even if it’s only for a few minutes or a few hours, if your kids know how to react, it can make the difference between safety and tragedy.

Survival Dogs: How To Start And Build Your Kennel (2)