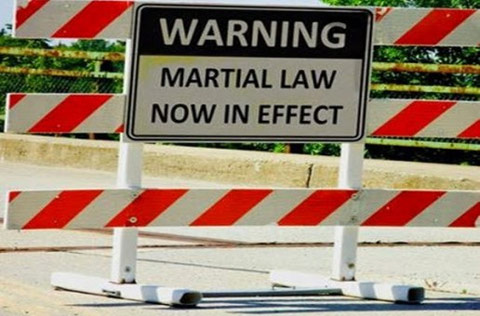 The “Martial Law” is thrown around with reckless disregard. Is America under martial law? This is a question that is most often discussed in the Independent Media.

Martial law occurs when the prevailing regime feels threatened by the message being offered by the loyal opposition. When normal means of censorship and marginalization fail, despotic regimes resort to martial law with all intended brutality of a violent crackdown on all of those being perceived as the “enemy”.

4-The seizing of personal assets such as food and water

5-Control over all food and water

6-The prohibition of weapons of any kind including guns, knives or chemicals which can be turned into explosives

7-The confiscation of property, homes and businesses

8-Arrests without due process

14-The total control or elimination of religion

15-Control of the media

16-Executions without due process of law

17-Total suspension of the Constitution

Just how many of these intrusive government policies are in place in the following video?

From your personal observations, how many can you name?

A full spectrum analysis of how far America has been taken down the road to martial law will be offered and will soon be released.