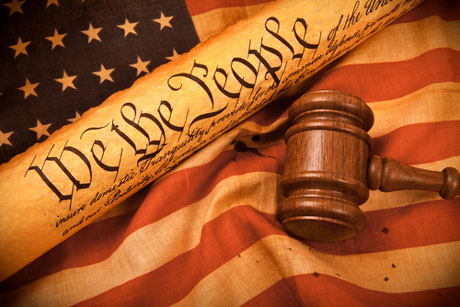 This commentary was written by Karl Denninger and was originally published at The Market Ticker.

I keep getting asked about this and people keep advocating it, so let’s talk about it.

Well, it quite arguably is, if you’d like to see the government return to its Constitutional boundaries.

The problem is that this “remedy” isn’t a remedy and if it comes to pass what you want won’t happen.

I know this for a fact and, if you think about it, so do you.

I know what you’re going to say: How can you be so sure?

It’s simple: There is nothing wrong with the Constitution as it sits now. The problem is that it’s not followed.

Amendment IV
The right of the people to be secure in their persons, houses, papers, and effects, against unreasonable searches and seizures, shall not be violated, and no warrants shall issue, but upon probable cause, supported by oath or affirmation, and particularly describing the place to be searched, and the persons or things to be seized.

It does not say:

a) Except when a police officer wants to stop and frisk you.

b) Except when the government thinks you might be a terrorist.

c) Except when someone else has your “papers” because you had to let them have same as an essential part of buying a service from them (e.g. your cell phone “tower” records.)

d) Except when you’re driving while black.

e) Except when you’re driving anywhere, at all, and the government thinks you might have drug money in the car but has no probable cause to believe so.

It says shall not be violated, and it further mandates that a warrant may only issue predicated on probable cause, supported by oath or affirmation (not theunsworn word of an unnamed “confidential informant” nor can a dog “swear an oath”) and that the particular place to be searched and the persons or things to be seized must be named. That latter requirement is there so the cops can’t go on fishing expeditions.

Let’s try another one:

Amendment II
A well regulated militia, being necessary to the security of a free state, the right of the people to keep and bear arms, shall not be infringed.

It does not say:

a) Except for guns that fire more than one bullet with a single pull of the trigger, unless they were made before a certain date and you pay a license fee.

b) Except for guns that have more than some number of rounds of ammunition in the magazine.

c) Except for guns that have some undesirable physical characteristic, such as looking scary, rifles or shotguns with a barrel shorter than some dimension, or similar.

d) Except for guns that fire a projectile larger than (X), or having characteristics of (X) (e.g. armor-piercing ammo, etc)

e) Except for guns that have been made quieter by the addition of a sound-suppressing device, unless you pay a license fee for same and the local sheriff thinks you’re nice.

f) Except if you don’t have a permit to (buy|carry openly|carry concealed) or otherwise “bear” same.

g) Except if you’d like to buy and take it with you right now (e.g. “waiting period” laws.)

h) Except for rocket launchers.

i) Except for surface-to-air missiles.

j) Except for nuclear arms.

Now wait a second, you say! Those last three are bullcrap in private hands!

Unwise? Maybe. And immaterial. It’s lawful and any law that says otherwise is unconstitutional.

Don’t even get me started on the Tenth Amendment.

I further challenge you to find anywhere in the Constitution where the United States Supreme Court, or any court for that matter, is empowered to re-write or as they like to say, interpret the plain language of said Constitution.

This is the sum total of what is said on same in The Constitution:

Section 1.
The judicial power of the United States, shall be vested in one Supreme Court, and in such inferior courts as the Congress may from time to time ordain and establish. The judges, both of the supreme and inferior courts, shall hold their offices during good behaviour, and shall, at stated times, receive for their services, a compensation, which shall not be diminished during their continuance in office.

Section 2.
The judicial power shall extend to all cases, in law and equity, arising under this Constitution, the laws of the United States, and treaties made, or which shall be made, under their authority;–to all cases affecting ambassadors, other public ministers and consuls;–to all cases of admiralty and maritime jurisdiction;–to controversies to which the United States shall be a party;–to controversies between two or more states;–between a state and citizens of another state;–between citizens of different states;–between citizens of the same state claiming lands under grants of different states, and between a state, or the citizens thereof, and foreign states, citizens or subjects.

The trial of all crimes, except in cases of impeachment, shall be by jury; and such trial shall be held in the state where the said crimes shall have been committed; but when not committed within any state, the trial shall be at such place or places as the Congress may by law have directed.

So where in there do you find there the power to rip up and rewrite said Constitution?

It’s not there, and it never was.

Where there is legitimate debate over statutory construction let’s have it, and let’s have it there in the Supreme Court. But there is no debate of legitimacy over construction of the 2nd or 4th Amendments. There are excuses for adding clauses that never existed and still don’t, but they’re flatly unlawful irrespective of who pronounces otherwise. Those who claim that technology or other changes in life have made the world a different place have a means to address their concern: Pass an Amendment.

Instead what has happened in the “real world” we live in is that the government will find some thing they wish to do. They know it’s unconstitutional but they do it anyway. Someone sues, after 5 or 10 years it makes its way to the Supreme Court and the government has in the meantime done its level best to stack the court with judges that will rule as it wishes. There is no law if the courts simply ignore what’s in front of them, as occurred with Obamacare where the majority opinion ruled that a statute that was explicitly constructed not to be a tax was in fact a tax but the imposition of such a direct tax is barred from the Federal Government except in proportion to population. In other words you can be (directly) taxed but not in a different amount than someone else. This is why the 16th Amendment was necessary; to lay a tax on someone’s work in proportion to what they made was unconstitutional.

All of this game-playing in the judiciary rests on the thinnest of foundation; so-called judicial comity and stare decisis. That is, the premise that once a decision is made even if blatantly unconstitutional, it is thereafter the foundation of everything that follows and reciprocity and recognition is owed against that (blatantly unlawful) decision.

You can’t fix this with a ConCon or with “more Amendments” because they are subject to the same “interpretation” as has been all of the previous; the only solution is to unwind the previous violence done to the Constitution and then, if appropriate, pass Amendments that further constrain the rights protected by and powers delegated therein.

Those who argue otherwise are fools, and those who refuse to take up the underlying issue and address it head-on are playing with you and are attempting to get you to expend your resources on a false premise to thereby consume your efforts rather than solving the problem.

You can interest me in a ConCon when the First, Second, Fourth and Fifth Amendments are enforced as written – not one second before.

The right place to enforce this is in fact the States. If the States will not do so, then the people have to decide whether we are 50 states or factually one statewith 50 names.

You choose but don’t blow smoke up my ass with this garbage about a “ConCon” fixing anything because it won’t.

This article has been contributed by Karl Denninger and The Market Ticker.

Karl is the author of Leverage: How Cheap Money Will Destroy the World in which he discusses the ill-use of leverage and how it is destroying the global economy, as well as where all of this will lead. The result is ugly: the value of everything—including gold—falls, and even personal safety is at risk in a world where there is limited money even for essentials like food and fuel.