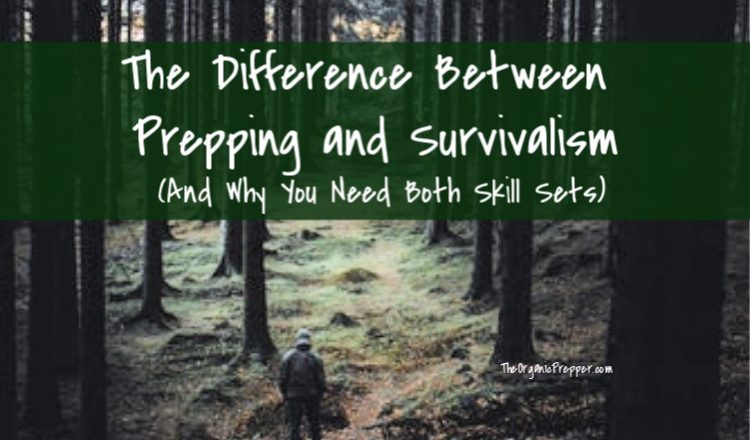 If there’s one thing I learned in Croatia a couple of years ago when I took Selco’s Urban Survival Course for Women, it’s that survivalism and preparedness are two entirely different animals. If there are two things I’ve learned, it’s that I have mad skills in one of these disciplines and I was a complete novice in the other.

There is absolutely some crossover between the two worlds. And although they have the same destination in mind, they’re also very different disciplines and both are as old as human history.

So, what’s the difference between prepping and survival? And do you really need both skillsets? Here are some of the things I learned in the Balkans about being more thoroughly prepared.

Prepping is the act of getting ready for emergencies large and small. Those of us who do this are called preppers.

Preppers prepare by gathering supplies, gear, food, and skills to see us through a crisis. That crisis can be anything from a job loss to a natural disaster to the end of the world.

Preppers are usually heavily focused on supplies. Many times, preppers plan to stay home or go to a designated bug out retreat if things go sideways. Preppers tend to spend a great deal of time repackaging food to last for the long term, gardening, and preserving. Preppers like to remain aware of current events and are ready to batten down the hatches fast if the situation warrants it. Quite often, the goal is to defend the homestead/retreat and stay put, so guns and ammo are often an expensive and large part of the prepper package.

Preppers have plans in place for dealing with things like power outages, localized civil unrest, and long-term production of necessities like hygiene items and food. Many also plan to thrive in a barter economy. They tend to plan to be comfortable during an emergency and its aftermath.

Survivalism focuses more on skills than supplies. A survivalist can generally hunt, forage, fish, and snare. Survivalists are good at moving stealthily through a variety of environments.

Survivalism is quite minimalist because most of the time, during an emergency, a survivalist will keep moving. You won’t see a bunch of camp stoves and generators at the home of a survivalist because he or she will use items in the environment for their needs. A survivalist values high-quality basics like knives, lighters, and first aid necessities.

Survivalists aren’t focused on comfort. Instead, they work toward being comfortable in a spartan environment. Survivalists focus on the lean basics that they can acquire on the move in different settings: food, shelter, heat, and water.

How are survivalism and prepping the same?

Survivalism and prepping are different roads to the same end – getting through a disaster. So the similarity lies in the goal. Preppers and survivalists are determined to survive whatever may come.

Another similarity is their commitment to independence. You won’t see either a survivalist or a prepper standing in line for a government handout or signing up for a cot at Camp FEMA. Both of these people fully intend to look after themselves, their families, and possibly look after others, too. They will be long gone or hunkered down well before the government convoy rolls into town.

Long story short – preppers and survivalists both intend to be here to pick up the pieces after all hell breaks loose.

How are survivalism and prepping different?

The biggest difference, in my opinion, is the primary focus: stuff or skills?

Preppers do have a lot of stuff. Their primary plan is hunkering down and bugging in. They could live for a long time off the supplies they have stashed away in their closets. And usually, they have a self-reliance plan to supplement those supplies. Most preppers rely on stuff and staying in one place to use that stuff.

We can throw a couple of other labels in here, too. A lot of preppers are also homesteaders, but not all homesteaders are preppers. In the modern sense of the word, a homesteader has a property they use to produce food. Most of this food is raised for their own families, although some homesteaders produce enough to sell some of the surplus to others.

As well, with the confidence I gained in Croatia, I began traveling extensively. Due to that, I’ve become extremely adaptable and resilient in different urban environments.

Do you need to be a prepper and a survivalist?

If you want the best of both worlds, you will expand your skills beyond the basics of only one category. One of the things I learned from Selco’s course is that while I know a lot about prepping and homesteading, most of my survival skills are based on being home to use my supplies.  Drop me off in a remote area with my everyday carry kit and I’m far less confident.

Sure, I know how to filter water and start a fire (finally). I have a good sense of direction and can get around well in urban environments, but I don’t know a whole lot about navigating with a compass and topographical map. I’d much rather pee inside than outside. And sneaking around the woods without sounding like a herd of elephants performing a series of grand jetes isn’t my strong point. I never really considered whether someone else could see my fire or the smoke from it, and I didn’t think too much about threats from wildlife because I was going to be safe at home.

When it all hits the fan, sure, Plan A is to stay in the comfort of my home and use my preps.  But if Plan A isn’t viable for a wide variety of reasons, then Plan B could include using my the survival skills I learned from Selco and Toby.  And heck, in many situations, you could start out the emergency in Plan B mode while trying to get to the safety of your home and family.

Could you survive in the situations above?

If not, you have a serious weak point in your plan. And you’re not alone. A lot of the preppers I know have focused so much of their attention on gathering supplies, learning to garden, preserving food, and setting up off-grid systems that they’ve totally neglected their survival skills.

You have to be at home to use the comforts of your home. If you’re not home you have to get home and in an epic disaster that’s going to be more difficult than you think. And we all know about one disaster causing another disaster until there’s been a whole series of awful (and potentially deadly) events.

Another thing I learned in the Balkans is that “home” may not be the sanctuary you imagined. Selco shared his experiences of leaving home with nothing more than the clothes on his back. There were many heartwrenching stories at a museum about the genocide accompanying items that were the only thing a person could grab as they were dragged from their homes. We like to think this can only happen across the sea, but it wasn’t that long ago that American citizens of Japanese descent were rounded up and put in camps right here in the USA.  Whether a person is put in a camp or able to flee and avoid that camp, home is no longer safe. You need survivalist skills for all of these scenarios.

But not so fast, survivalists. If you don’t have anything extra put back and your entire plan is to book it out to the boondocks, string up a hammock, and live off what you can hunt and forage, that’s a problem too. Not all disasters are the type where the best answer is to head for the hills. What if it’s something like getting laid off from your job? If you have a family, getting lost in your nearest national park is not the answer. With the common sense supplies you have put back, you’ll be able to survive an interruption in income without major changes in your family’s lifestyle.

Being out and about when it’s hitting the fan can be rife with danger. As Selco said in a previous article, you should have enough supplies that you don’t need to be out and about in the early and most dangerous stages of a crisis.

There aren’t any one-size-fits-all answers in the world of survival and preparedness.

Every situation will have unique variables and then on top of that, every household with have more variables still. (Check out The Prepper’s Workbook to identify your special needs.) If you want to be truly prepared, you need to figure out your weak points and focus on those for a while. I’m not saying to halt your stockpile efforts or to forget about going out to the forest.

I’m talking about balance. If you want to be ready for anything, you will find some balance between the two worlds. You may have some reason that you feel you are only suited to one of these pursuits, but you are shortchanging yourself.

If, for example, you don’t have the money to stockpile, there are ways you can turn your regular grocery bill into food storage money. You might need to take on a gig of some sort to make some extra cash for stocking up. It may take some additional effort or some new ways to shop, but if I could stockpile with a single mom minimum wage budget, I think that nearly everyone can put a few things back.

On the other hand, if you need to work on your survival skills you may have something physical holding you back. We live in a country where chronic illness and disability are rampant for a wide variety of reasons.  If this is you, you are going to need to adapt within the limitations of your body. You don’t have to be particularly agile to practice building fires, navigating with maps, and cooking using primitive methods. You can also push your limitations by walking a little bit further every day, figuring out how to transport the supplies you need, and spending some time outdoors. If you can’t walk easily, then you need to figure out how you’ll get around in a worst-case scenario.

Don’t get down on yourself if you can’t do the things you want to – figure out ways to do those things. One of the things I heard repeatedly during the Urban Survival Course was “train with the body you’re in.” That goes for all of us. Trust me – I was quite humbled when I got out there in unfamiliar terrain with the guys. Just begin to get out of your comfort zone, a little bit at a time.

Do you consider yourself a prepper or a survivalist or both?