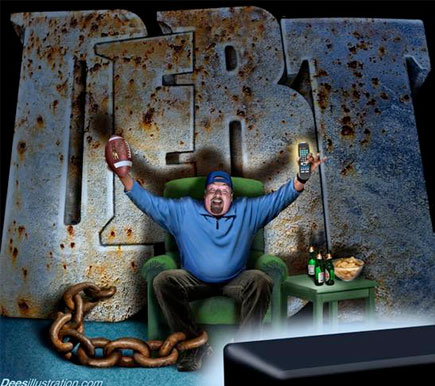 This post was graciously contributed by Michael Snyder and originally published at his Economic Collapse blog.

Editor’s Note: Are we slaves today? Or are we free men? The question might sound insulting on many fronts: of course we’re not slaves – we make our own choices on the free market as to what to eat, what to wear, where to go, what to do for fun and the like. Moreover, comparing our current condition, even if not ideal, to the slavery of days past when people were put in chains and treated as subhuman seems insulting to those who endured it.

But for those brave enough to face the question, perhaps you have realized that this era is one of economic bondage, of slavery primarily through financial means. Just as many serfs and indentured servants were, we are free to move about, but yet we are not free. With mountains of debt saddled on the vast majority of us, and a long chain of taxes and conditions blocking anyone from true ownership and true prosperity, we dare not call ourselves free in our true heart of hearts. There is something better, and we know it. Those who read this blog know that we are being controlled and manipulated through our financial system, our fiat currency and the invisible chains of debt. Until we address these factors, only a few can truly call themselves free…

Most Americans spend their lives working for others, paying off debts to others and performing tasks that others tell them that they “must” do. These days, we don’t like to think of ourselves as “servants” or “slaves”, but that is what the vast majority of us are. It is just that the mechanisms of our enslavement have become much more sophisticated over time. It has been said that the borrower is the servant of the lender, and most of us start going into debt very early into our adult years. In fact, those that go to college to “get an education” are likely to enter the “real world” with a staggering amount of debt. And of course that is just the beginning of the debt accumulation. Today, when you add up all mortgage debt, all credit card debt and all student loan debt, the average American household is carrying a grand total of 203,163 dollars of debt. Overall, American households are more than 11 trillion dollars in debt at this point. And even though most Americans don’t realize this, over the course of our lifetimes the amount of money that we will repay on our debts is far greater than the amount that we originally borrowed. In fact, when it comes to credit card debt you can easily end up repaying several times the amount of money that you originally borrowed. So we work our fingers to the bone to pay off these debts, and the vast majority of us are not even working for ourselves. Instead, our work makes the businesses that other people own more profitable. So if we spend the best years of our lives building businesses for others, servicing debts that we owe to others and making others wealthier, what does that make us?

In 2015, the words “servant” and “slave” have very negative connotations, and we typically don’t use them very much.

Instead, we use words like “employee” because they make us feel so much better.

But is there really that much of a difference?

This is how Google defines “servant”…

“a person who performs duties for others, especially a person employed in a house on domestic duties or as a personal attendant.”

This is how Google defines “slave”…

“a person who is the legal property of another and is forced to obey them.”

This is how Google defines “employee”…

“a person employed for wages or salary, especially at nonexecutive level.”

Yes, most of us might not be “legal property” of someone else in a very narrow sense, but in a broader sense we all have to answer to someone.

We all have someone that we must obey.

And we all have obligations that we must meet or else face the consequences.

At this point, Americans are more dependent on the system than ever before. Small business ownership in the U.S. is at a record low, and the percentage of Americans that are self-employed has fallen to unprecedented levels in recent years. From a very early age, we are trained to study hard so that we can get a good “job” (“just over broke”) and be good cogs in the system.

But is that what life is about?

Is it about being a cog in a system that ultimately benefits others?

Perhaps you don’t think that any of this applies to you personally.

Well, if someone came up to you and asked you what you truly own, what would you say?

Do you own your vehicle?

In fact, today the average auto loan at signing is approximately $27,000, and many of them stretch on for six or seven years.

What about your home?

Do you own it?

In fact, overall the banks have a much greater “ownership” interest in our homes and our land than we do.

But even if you have your home totally “paid off”, does that mean that you actually “own” it?

Well, no, not really.

Just see what happens if you quit paying your property taxes (rent) to the proper authorities.

So if they can take your home away from you for not paying rent (property taxes), do you really own it?

That is something to think about it.

What about all of your stuff?

Do you own it?

But a very large percentage of us have willingly enslaved ourselves in order to acquire all of that stuff.

Today, the typical U.S. household that has at least one credit card has approximately $15,950 in credit card debt.

And if you do not pay off those credit card balances, the credit card companies will unleash the hounds on you.

Have you ever had an encounter with a debt collector?

They can be absolutely brutal. And they use those tactics because they work. In fact, they are so good at what they do that many of those that own debt collection companies have become exceedingly wealthy. The following is from a recent CNN article…

Yachts. Mansions. Extravagant dinner parties. Life is good for the founders of one of the nation’s biggest government debt collectors.

That firm, Linebarger Goggan Blair & Sampson, rakes in big money from government contracts that allow it to pursue debtors over toll violations, taxes and parking tickets. While the debts often start small, the Austin-based firm charges high fees, which can add hundreds or even thousands of dollars to the bill.

After growing this business from a small Texas law firm in the late 1970’s to a nationwide debt collection powerhouse, the firm’s founders and top brass have walked away with millions of dollars.

And I haven’t even mentioned our collective debts yet.

We have willingly chosen to collectively enslave ourselves on a local, a state and a national level.

It is bad enough that we are doing this to ourselves. But we are also cruelly saddling future generations of Americans with the largest mountain of debt in the history of the planet. The following is from my previous article entitled “Barack Obama Says That What America Really Needs Is Lots More Debt“…

When Barack Obama took the oath of office, the U.S. national debt was 10.6 trillion dollars. Today, it has surpassed the 18 trillion dollar mark. And even though we are being told that “deficits are going down”, the truth is that the U.S. national debt increased by more than a trillion dollars in fiscal 2014. But that isn’t good enough for Obama. He says that we need to come out of this period of “mindless austerity” and steal money from our children and our grandchildren even faster. In addition, Obama wants to raise taxes again. His budget calls for 2 trillion dollars in tax increases over the next decade. He always touts these tax increases as “tax hikes on the rich”, but somehow they almost always seem to end up hitting the middle class too. But whether or not Congress ever adopts Obama’s new budget is not really the issue. The reality of the matter is that the “tax and spend Democrats” and the “tax and spend Republicans” are both responsible for getting us into this mess. Future generations of Americans are already facing the largest mountain of debt in the history of the planet, and both parties want to make this mountain of debt even higher. The only disagreement is about how fast it should happen. It is a national disgrace, but most Americans have come to accept this as “normal”. If our children and our grandchildren get the opportunity, they will curse us for what we have done to them.

So can we really call ourselves the “home of the brave and the land of the free”?

Isn’t the truth that the vast majority of us are actually deeply enslaved?