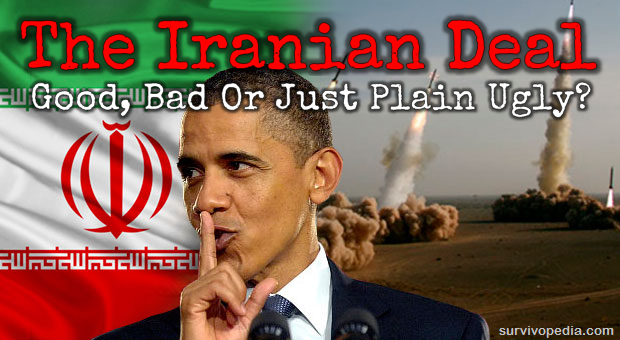 The Obama administration has announced that they’ve finally reached an agreement with Iran over their nuclear program.

But what does that mean? Is it good or is it bad? A lot of that has to do with how you view it.

According to the “fact sheet” put out by the White House, this deal pushes any of Iran’s plans for nuclear weapons development back years. But then, that requires believing the fact sheet.

Considering the huge number of lies that have come out of this administration, one really has to stretch their imagination to believe them.

Like anything else in politics, there’s more symbolism here than there is substance; and that symbolism is designed for nothing more than to make Obama look good. He seems like he wants to be able to point at this deal as one of his crowning achievements in office, especially considering that some of his other crowning achievements have fallen flat on their face.

What Does the Iran Deal Give Us?

If you just read the fact sheet, it actually sounds pretty good.

Iran is going to reduce their total number of centrifuges from over 19,000 to 6,000. They are giving up most of their stock of enriched uranium, and agreeing to limits on how pure they can enrich uranium in the future. Finally, their main nuclear facility, which is located under a mountain, where it is thought to be impervious to attack, is going to be limited to only peaceful research.

That all actually sounds pretty good. But then, within hours of the White House releasing this “fact sheet” Iran began publicly denouncing it, stating that the information in it is untrue. That doesn’t make this look like the great deal it’s supposed to.

Of course, what Iran is getting to keep under this agreement is nowhere near what the White House declared that they were going to insist on. Apparently Obama is only good at insisting when he deals with Congress, those tactics don’t seem to translate well on an international scale. So Iran is getting to keep a whole lot more that we were led to believe they would be allowed to.

The other thing that makes this deal suspicious is that Iran is already announcing that they won in the negotiations. I don’t know about you, but I’m suspicious when a government who has declared enmity against our country claims that they’ve won the negotiating table.

I’m not suspicious of them, I’m suspicious of the deal that was struck. If this deal were so hard for the Iranians, drastically reducing their aspirations to produce nuclear weapons, why would they be crowing about it?

Of course, like any such deal, in the real world, more depends upon the implementation than the words on the paper. There are a lot of details yet to be worked out, and in reality, what they have is nothing more than a framework.

Iran doesn’t even have to start doing any of the things they say they’re going to do until those details are worked out and agreed to by all parties. Then, if they follow true to their pattern, they’ll find excuse after excuse to drag their feet and prolong the process.

There’s really not a whole lot of reason to believe that Iran is actually going to do what they say they are going to do. They haven’t been too forthright in the past, keeping inspectors out of facilities and lying about their actions. Even building their main nuclear facility under a mountain shows us that they are trying to have a secret program. What makes anyone think that they are going to stop?

Oh, and, by the way, that facility under the mountain was built in defiance of the previous agreement. Since the agreement specified the locations where Iran’s nuclear program was taking place, the new location, which was built after that agreement went into effect, wasn’t listed. So, as far as Iran’s government was concerned, it didn’t fall under that treaty.

All Iran has to do is move their operations underground, to some secret and secure location and we won’t have any way of knowing what they are doing. Just look at Iraq and how many operations they had in underground bunkers.

Is there any reason to believe that Iran hasn’t followed suit?

We Have a Safeguard… But There’s a Catch!

The safeguard in these agreements is that UN inspectors get to inspect Iran’s nuclear facilities, documents and stockpile. But, this agreement merely allows “regular inspections.” What does that mean? How frequent? Do the inspectors have to make an appointment? Are they limited in what locations they can inspect?

You see, the document is missing one critical word, “anytime.” Without that word, Iran can limit inspections to regularly scheduled events, with plenty of advance notice. That will give them the opportunity to hide anything incriminating, come up with false documentation and send critical people out of town on vacation, so that they aren’t available for questioning. Some inspection.

From my desk, it looks like this has all been about getting trade sanctions lifted off of Iran, while allowing them to keep their nuclear program. Even the fact sheet says that they will still have a nuclear program.

This agreement merely moves the estimated completion date for a nuclear warhead from a span of two to three months out to a year. So, even if everything in the agreement is followed, Iran could be setting off a nuclear bomb in one year.

We mustn’t forget that Iran has missiles with an intercontinental range either. That was supposed to be on the negotiating table and was another item that the Obama administration declared that they wouldn’t allow to continue. But from the outset Iran has stated that their missile program wasn’t up for negotiation and our wimpy negotiations team capitulated.

Finally, even if Iran lives up to every provision of the agreement, it has a sunset clause. In ten years, 15 for some provisions, the agreement comes to an end. At that time, Iran will be treated like any other country which has nuclear weapons.

In other words, the agreement all but gives them permission to develop nuclear bombs in 10 years. So, if they decide to be patient, they can destroy Israel and the United States in 10 years, rather than doing it next month. Doesn’t sound like much of a sacrifice to me.

This is an ugly deal. While being trotted out before the American people as reducing Iran’s nuclear capability, it really doesn’t have any teeth to do that. At the most, it slows them down a bit; but I wouldn’t be at all surprised to find that they have already figured out a way around the treaty. Otherwise, why would they even bother to sign it?

I just read a novel about Iran hitting the United States with an EMP attack and the aftermath of that attack.

Maybe it wasn’t just a novel…

6 Survival Items To Hoard When You’re 60