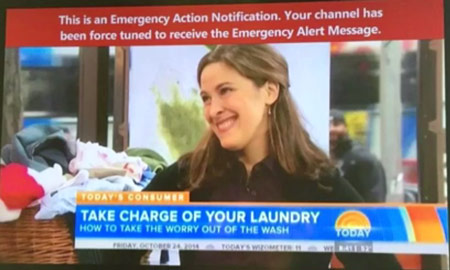 Thousands of viewers in Atlanta, Austin and Dallas had their television service overtaken by the national Emergency Action Notification system today. According to Fox Engineers, the EAN can only be activated by the President of the United States, prompting questions about to how the system was able to force tune regularly scheduled programming when no emergency had been declared.

A statement from AT&T U-verse says the company is trying to figure out how and why the EAN system was activated on their network:

“Earlier today U-verse TV customers may have received an Emergency Alert notification. We have confirmed that there is no emergency at this time and we are investigating why this occurred. We apologize for any inconvenience.”

Viewers who saw the message appear on their television captured screen shots and sent them to local news stations and news web sites:

The Emergency Alert System is mandatory by law – stations have no control or power to block the signal once it is sent out by the federal government. Broadcasters are required to install and maintain FCC-certified EAS decoders and encoders at their control points, meaning the signal cannot be switched off or interrupted.

How sensible is it that the feds ‘mistakenly’ sent out an emergency alert – potentially causing panic – amidst national concerns about the Ebola outbreak in the United States?

The United States has several Emergency protocols that allow the government to take over communications systems at the behest of the President.

In 2010 Congress heavily pushed legislation that would have given the President authority to shut down the internet in the event of an emergency such as cyber attack targeting America’s financial system. The bill expired before a vote was taken, but it is believed by many that America’s domestic security agencies have already developed and implemented an “internet kill switch” that would, among other things, give the government complete control of data across the public internet, including the ability to take major internet access points offline.

Cell phone networks have also been augmented to include Emergency Alert systems that can be initiated by the government. At Watson notes, the system malfunctioned in 2011 when messages sent to cell phone users warned their owners that they needed to take shelter because of an imminent catastrophe.

According to a report from 2012, the Federal Bureau of Investigation may have the capability to shut down entire cell phone subscriber blocks by working in tandem with device manufacturers and mobile phone companies. Hackers who infiltrated FBI records found lists that included the device identifiers, phone numbers, and address books for 12 million Apple subscribers. The infiltration suggests that the FBI has specific details about users and the networks they use to communicate, prompting fears that they could initiate this “geo fence” technology to shut down or overtake cell phone service in a specific city, region or the entire country.

Though Americans currently enjoy the ability to freely utilize their televisions, computers and cell phones as they see fit, during a nationally declared emergency everything can change within seconds.

Technology such as what the FBI and the Department of Homeland Security has implemented could potentially be used to not only alert Americans of potential emergencies, but to redirect the messages that are being broadcast to the public. Specifically, they now have complete access to shut down any news, information, videos or citizen reports that run contrary to the government’s narrative.

Those concerned with the possibility of losing communications with loved ones in an emergency should consider implementing alternate communication protocols.