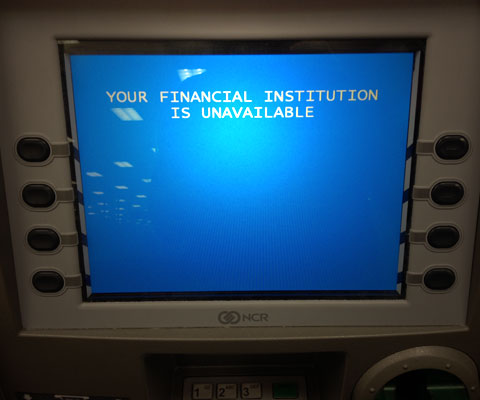 If you needed a better motivation to get your funds out of the bank, this is a clear sign that a digital clampdown is coming.

There are increasing examples of technology failures and stricter bank policies that are keep people from getting their money.

And they are happening all across the globe.

Ulster Bank in Ireland just made news after customers were locked out of their accounts by a glitch that disabled access to wage money:

Following a number of complaints from those expecting their weekly and monthly salaries to post, the bank apologised on Twitter for the glitch.

“We’re aware that a number of customers are experiencing delays in receiving credits this morning, our tech team are working on this at the moment,” the bank’s customer care account, @UlsterBank_Help tweeted.

Supposedly the problem is minor, short term and only happening at the one local branch. The bank has apologized for difficulties.

Unfortunately, the larger picture makes clear that this will happen again somewhere, and it could happen to many more people.

Even routine maintenance and website updates can be enough to block customers out of their accounts, often without even giving advanced notice; many credit unions, while offering a better choice, likely hold most of the same policies.

Consumer Affairs.com reported on many customers who’ve been shut out of their funds due to Suspicious Activities Reporting including cases where small business owners were considered potentially money launderers for conducting ordinary business by sending out checks to pay bills and employee salaries:

“I am a sole proprietor with a small business and have my income direct deposited into my checking account at 5/3. 3 days ago I went into the bank to get money orders and they treated me like I was robbing the bank. After about 40 minutes, they gave me the money orders and unknown to me had placed two half-a-million-dollar holds on my accounts with them. I was told it looked like money laundering and was treated like I had done something wrong,” she said. “They won’t give me my money and I can’t pay my employees nor my bills. They basically stole my money and I have to fight to get it back.”

South Africa just set new rules requiring banks to freeze the accounts of anyone who has the wrong address listed on their account.

If your bank statements are still being posted to an address that is no longer your residence, your bank account could be frozen, according to the South African Banking Risk Information Centre (SABRIC), which has urged South Africans to update their personal details with their bank.

In terms of the Financial Intelligence Centre Act (FICA), banks must have the correct customer information to ensure FICA compliance. ‘Know Your Customer’ (KYC) documents include, among others, identity documents and proof of address.

Similar policies in the United States, many of them established under terrorism laws, already require banks to automate monitoring and reporting of any suspicious transactions, including any transfers above $3,000 dollars, large cash withdrawals, all currency exchange activities and dozens of other details about individual accounts.

The laws even give banks legal immunity from any harm or false imprisonment that may come from false reporting “suspicious” activities.

As SHTF reported a few days ago, banks have even been ordered to seize cash from customers and alert police over large cash activities:

The Justice Department has ordered bank tellers across America to contact law enforcement if they suspect your cash withdrawal may have something to do with illicit activity. There doesn’t need to be proof, or any sort of red flag indicator – merely suspicion by the bank teller processing your transaction is now enough to have you investigated by authorities.

Via The Sovereign Man Simon Black

What a lot of people don’t realize is that banks are already unpaid government spies.

Federal regulations in the Land of the Free REQUIRE banks to file ‘suspicious activity reports’ or SARs on their customers. And it’s not optional.

Banks have minimum quotas of SARs they need to fill out and submit to the federal government.

A new wave of tech disruptions may even occur, as American consumers step inside of an era of cybersecurity full of hacks, denials of service, account restrictions, password fails, lockouts and the integration of biometrics for authentication that ultimately connects billions of people through millions of nodes on a global Internet dominated by corporations and ultimately regulated by the highly political FCC.

What happens when individuals are locked out of their lives or unable to monitor their accounts due to changing rules and standards for things like verifications, password retrieval, insufficient funds and suspicious (or misunderstood) transactions that draw red flags.

Establishing the status quo of strict surveillance and control has played out under a narrative of white and black hackers battling it out under the new rules of the game for cybersecurity.

“The banks are not only doing this for compliance purposes, but also to minimise customers’ exposure to bank crimes such as fraud, identity theft and cybercrime,” Pillay insisted. (source)

How far will it go?

The Halifax bank in the UK is already running trials to wirelessly verify biometric readings of your heartbeat signature in order to authorize ATM and bank transactions:

Halifax is believed to be the first British bank to trial technology which will allow customers to prove their identity through the analysis of their heartbeat.

Bank customers of the future could wear slender bracelets which measure the intricate “cardiac rhythms” unique to every person.

As with today’s existing contactless card technology, the bracelet, called a “Nymi”, will communicate with a checkout till or cash machine to allow the customer to pay for goods or draw money.

Keeping your money in banks under these circumstances will make banking convenient only for the most compliant members of society.

On the other hand, pulling all your money out can already draw suspicions. You are most certainly being watched.

Hence, many people have already opted out of the banking system. As Daisy Luther reported, an estimated 43% of Americans don’t rely on their deposits any more:

This means that 43% of the people who are saving money are not putting it in the bank. This is good news for those of us who wish people would wake up and see the net being cast around them, but bad news for the banks that depend on deposit accounts to be able to give out loans and earn interest.

In an recent interview, alternative asset manager Eric Sprott explains why stashing fiat currency in a bank is a bad idea:

Long term, there may be value and necessity in reorienting your efforts in the barter system, and not only being able to buy and trade goods and services in gold and silver, but in being able to sustain yourself by providing a useful skill or service.

Transitioning into that could be challenging, but is a worthwhile pursuit in your prepping readiness lifestyle, and a big part of being self-sufficient, as Tess Pennington’s Prepper’s Blueprint explains in chapter 53 on the importance of bartering and community for survival.

Don’t say it couldn’t happen, lest, we should wait for another MF Global to happen, and customers to take a loss on their stolen funds.